After a pretty sleepless night, we were up at 4.00 am to be ready to leave at 4.45 to catch the sunrise over Angkor Wat. This is the big one. A UNESCO World Heritage Site, it is said to be one of the largest religious monuments in the world. Armed with this information we put the best face possible on being up and setting off in the dark to see it. 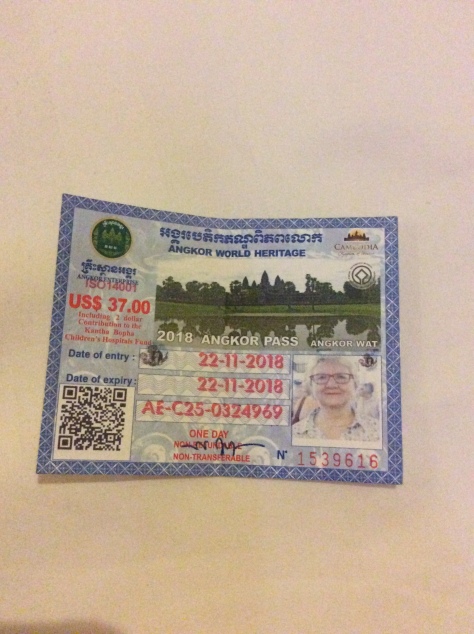 First stop was the ticket office. It had the feel of a busy railway station, with countless booths selling tickets. Each ticket has a photo of the owner on it, which is a nice touch and I thought I did not turn out too badly for the unearthly hour it was taken……!

Of course when we arrived at the site with a million other people to see this wonder the inevitable occurred. It was cloudy and there was no real sunrise! Nevertheless it was amazing to see such a world renowned edifice slowly emerge from the gloom in which we first saw it.

Gradually as the light gradually infused the scene the silhouette and reflections improved. It is a vast site and (very reminiscent of the Mexican Mayan monuments I thought ) emerged from the vegetation which engulfed it over centuries. Of choice ruse the local villagers knew it was there, but it took Europeans to draw attention to it and reveal it from its overgrown state. 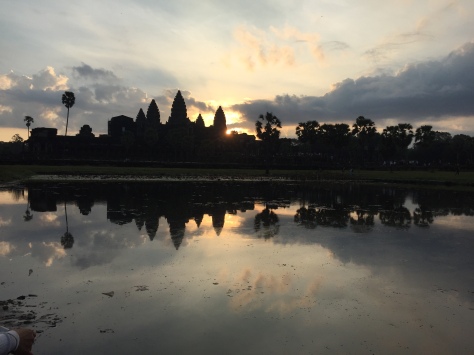 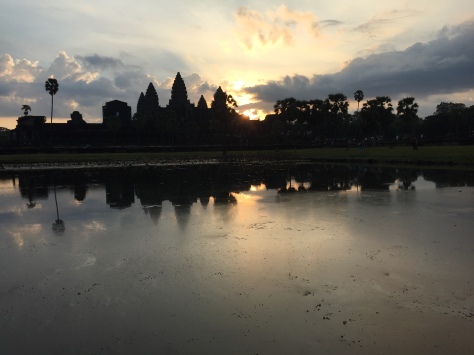 Angkor Wat derives its name from the terms ‘Angkor’ meaning city and ‘Wat’ meaning temple. Angkor was the capital and wealthiest city of Cambodia until the capital was moved to Pnom Penn. It, and it’s surrounding religious sites, cover a vast area. Angkor Wat is seen to be the finest and best quality structure, although we were to see 5 very different monuments during the day. Angkor Wat, built in 37 years, started life as a Hindu temple dedicated to Vishnu for the Khmer Empire. It was built in the early 12th Century by King Suryavarman and ultimately became his mausoleum. By the end of the 12 century it had been transformed to Buddhism.

There was a lot to see and some lovely shadows and etchings but we were unable get to the highest point because it was a Buddha day and there ceremonies taking place. The sound of chanting could be heard throughout our visit. 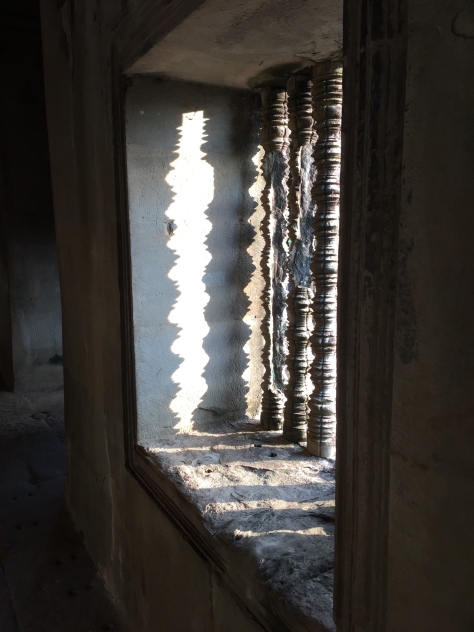 Following this we visited four temples and one citadel. Many showed signs of being adversely affected by tree roots. Most figures have lost their heads due to looting or heads being removed to prevent looting – to my mind amounting to the same thing, headless figures! It was a challenging day because of the heat and the number of other tourists involved, but all of the places we saw merited the visit and were fascinating in their own way but we were exhausted at the end!

A few pictures to tempt you and I will try to get the names right in the order we saw them……. As my first typing letters would say ‘E&OE’ – Errors and Omissions Excepted!

First came the Citadel, which was near a lake. 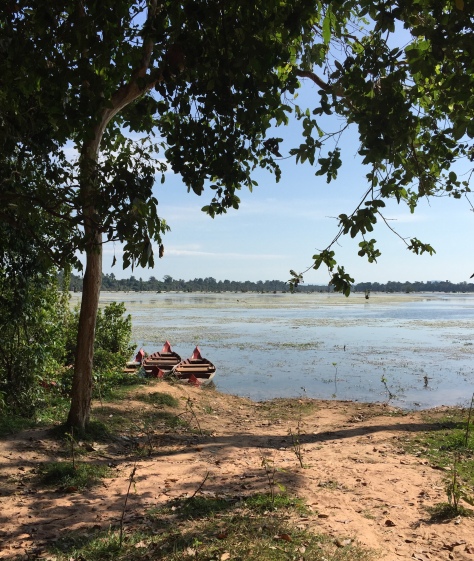 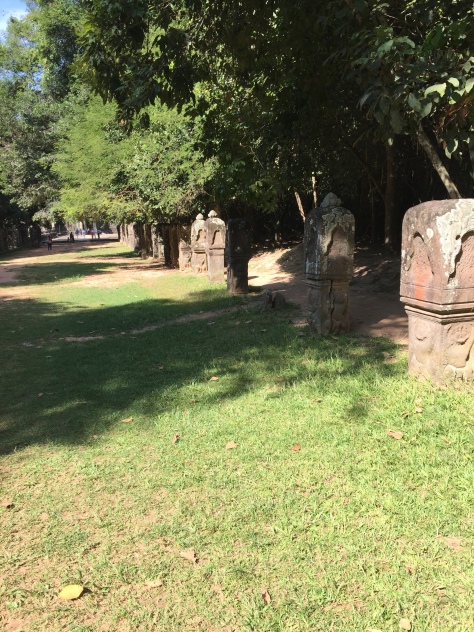 The chap in charge at this stage sounds a pretty good egg. He built hospitals and free road houses for travellers. All very enlightened!

Next we visited Preah Khan where we saw the first evidence of trees growing through stonework. Extraordinary! The area was approached by a bridge where monks created a great contrast to the dark stonework…. 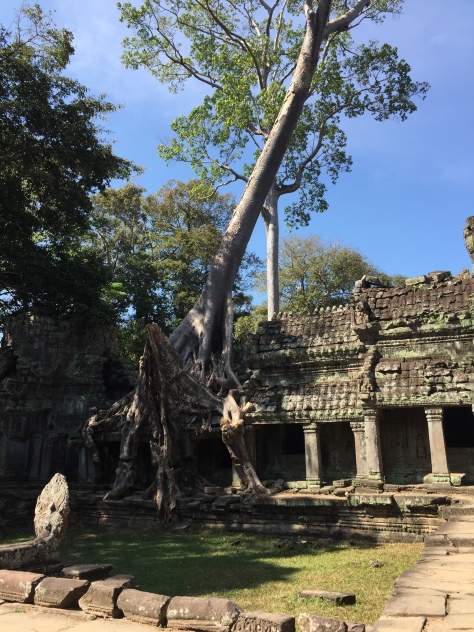 On the way there we came to a sort of side chapel where, once again I was surprised how similar the architecture was to that which we came across in Mexico. Even the way it was built……..

The next picture is tricky – the alert will see the head of a sleeping Buddha in the brickwork. 😳. 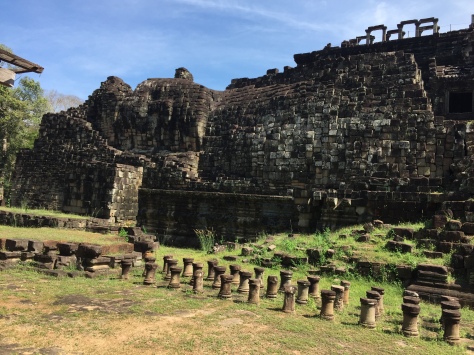 I liked the next one – at Angkor Thom, The Bayon, where all heads came the right way up and all different….. 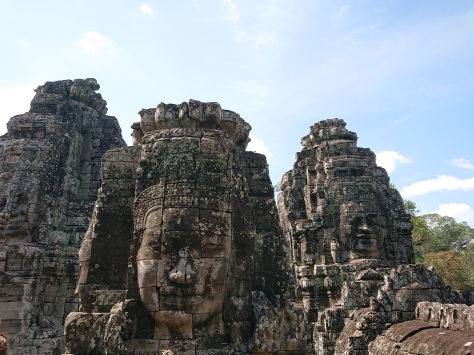 Finally, we visited Ta Prohm where the ruins were literally riddled with roots making some amazing pictures but by this time I think we were all drooping. The heat was nearing 40 degrees and I was running out of charge – both in device and in person!

I have to report that we were pretty pooped when we got back to the hotel and only managed an hotel sandwich for supper and then bed.

One thought on “Thursday, 22nd November”