It seems no time at all since I put down my pen equivalent following my Australian musings and here I am taking it up again to report on my delve into the delights of Cambodia and Laos.

My companion on this trip is my old friend and adventure sharing buddy Denise, Keith having decided that he could resist the attractions of steamy heat and temples. I have to report that Denise and I have ‘previous’ on this travelling business, having walked the three peaks in Yorkshire, clambered over several Brecon Beacons, journeyed through Holland and more recently wandered around Burma together In addition to having survived numerous commuting train journeys and a major company merger. With that behind us, how can this trip fail? Nevertheless it faced a very early hurdle as I had the start date wrong. For some reason I had it in my head that to start a trip in Cambodia on the 21st November I could leave Kent on the same day. Unfortunately not possible. I therefore have to very shamefully report to having let young Mickey Wightman down on our planned day out together and set out to travel on the 20th.

So here I am. After a ten hour journey to Bangkok and a 40 minute journey from there to Siem Reap and three breakfasts later I have arrived. I have to pause here to record another little nicety – the tartan food bag.

This is what Smile Airlines served our third breakfast in and insisted that we should keep it. Obviously the challenge of the holiday is going to be ‘How many uses can you find for your Smile bag?’ It is a worry!

After this excitement, and once we had obtained our Visa to enter the country, it was fairly plain sailing to collect our bags and find the man to take us to the hotel. Our first impression of Cambodia was extremely favourable. Leaving the airport we were immediately driving along a broad ‘boulevard’, with three distinct and separate lanes of traffic. An interesting phenomenon- the middle lane in which we were travelling had traffic in both directions. To our right, over a grass verge was another lane of traffic travelling in the same direction as us. To our left, across another verge was traffic coming towards us. Interesting….

Anyway, leaving the traffic behind (as it were) and back to those first impressions – it is a clean, green and pleasant land. The vegetation I would describe as lush and all along the road initially there were the ubiquitous umbrella covered Asian stalls selling everything from clothes to miniature temples. Eventually these ceased and we were treated to an array of up market hotels. These of course were not for us. We skimmed pass them (the driver did not seem to get out of second gear – do you think we are going to see Cambodia in second?) and turned off into a narrower much busier road, and then again into an even narrower and even more busy sort of lane. Here we turned into our hotel, nestled under large green leafed vegetation, no doubt harbouring a million mosquitoes. Those that aren’t hovering around the poolside that is. We are home for the next three days. Surrounded by local colour.

We were very prettily greeted by the young reception staff. We learnt several things. First that our rooms would not be available for several hours (it was by now 9.30 am), that there were to be 6 people on our trip and that one of them was an Australian girl called Sarah from Melbourne.

Feeling pretty tired, after a drink in the Hotel breakfast room,we adjourned to a shady sun lounger where we snoozed away a few hours. This sleep update continued once our room was ready…..! 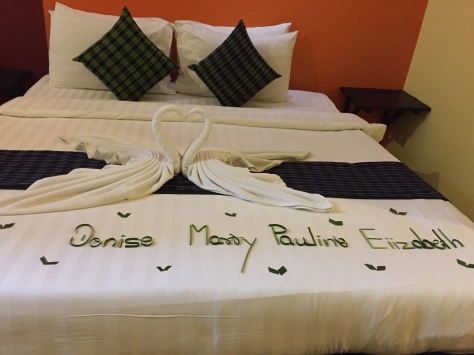 and we slept very happily until about 4.00 pm when we rallied to prepare for the inevitable first night get together. Here we met our compatriots – Gabriella from Switzerland, Emma from London, Bruce from New Zealand, the previously mentioned Sarah from Melbourne and our guide, Kom. Definitely a small but beautifully formed group.

Chats over and having found that it is a 4.45 start tomorrow to see the sunrise over Angkor Wat, we set off for supper. We have arrived during the festival of Moon and Water so the place was heaving. There seems to be no rules of the road and motorbikes, scooters, push bikes and tuk tuks vied with cars for space, all at the expense of the pedestrian. On reaching the river we crossed to the Amazon Cafe where we had an excellent meal.

All life was around us. Sprays of water could be seen being shot into the air a little distance away. The lights of the night market could be seen going into the middle distance. The jewelled colours of lights on the water. It was a kaleidoscope of colour and noise. However, we decided that that early start was our priority and we turned away from the hubbub and back to the hotel. To bed.