The Wightman’s were off to a work function, so we set off with them for the city for breakfast.  The harbour was already busy.  The advertised market at the Rocks was quite small, so we glanced at that and turned right at the quay.  We were immediately caught up in the stream of people leaving the latest ship disgorging its cargo of humanity onto the dockside.  There were literally hundreds of them, festooned with luggage and cruise momentoes, all eventually to be dispersed into the public transport system and I guess return to their homes in all corners of the earth!! Fascinating thought!  The liner of course waited patiently to fill up again and go on it’s way….,,,,

While dwarfing everything else in the harbour! Including the bridge!

We walked on to the Opera House cafe for breakfast.  It was a glorious morning.  Keith took photographs of me …….. and the new sunglasses which I think were a bigger attraction for his photographic skills!

And I took photographs of his coffee against the background of the bridge. – not very successfully!

We then set out to walk around the botanical gardens via Mrs Macquarie’s seat. Governor Macquarie apparently not only built her a seat, but had a whole road created to convey her down to her favourite viewpoint.  It is interesting to think how different her view would have been from this spot, to the well known landmarks now. 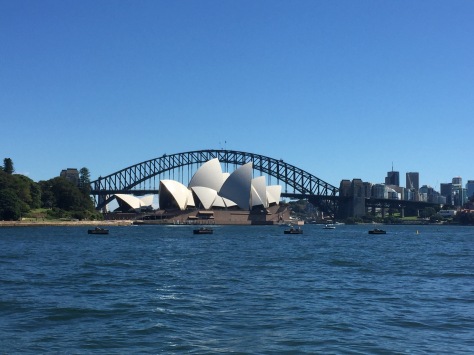 The area around the seat itself was buzzing with a Chinese tour party. I don’t know how many there were, but there were about 20 buses with their Chinese drivers along the road behind.  They were having a great time.  We waited for a gap in their photography session to take ours of the famous seat – when they insisted not only that they take the photograph, but then take lots with their own cameras with them and us in it!  I always find this very amusing. We have found it when we were in India as well – they like to have other people in their photographs when I fight to keep people out of mine! 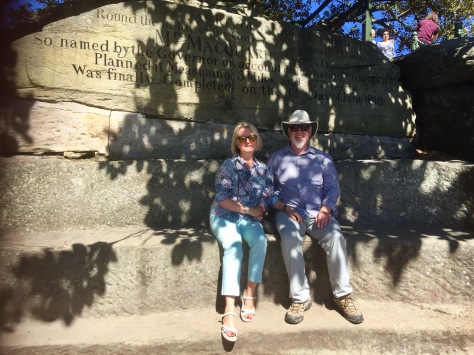 We rounded the headland and escaped the crowds and found ourselves in a much quieter part of the harbour with a very different form of shipping.  Big grey naval ships bobbed up and down along the jetty walls giving a much more serious air.   We then moved on again and  looked down on a hotel where sunbathers lay around an Olympic sized swimming pool and soaked up the sun.  Sydney is certainly a city of contrasts.

We turned back into the trees.  It was great to wander under their shade.  The trees themselves were beautiful and often vast. 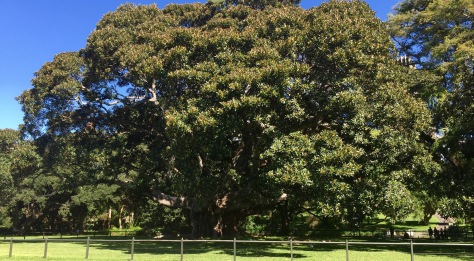 We decided that as the day was getting hot we would return to the house and the shade of the veranda for the afternoon.  The Wightman’s returned – the girls looking very exotic with hair braided and, in Coco’s case, a dusty blue.  We looked at their photographs and heard about their day.  A family afternoon.

The early evening saw us set out for our last supper together at the local Indian restaurant which we managed to reach before a storm descended and it poured with rain – but we had sunshine in our hearts! A great meal with lots of toasts and favourite moments remembered. 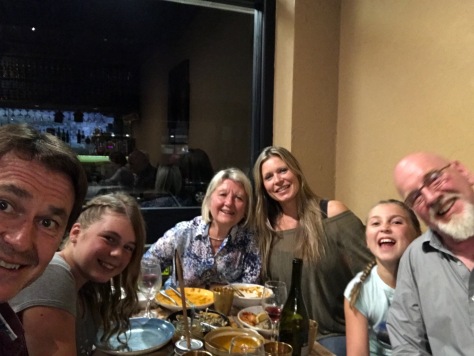 Tomorrow we take the girls to the City aquarium or, more likely, they will take us!