We woke up to a dull day, perhaps a more appropriate light to visit the Port Arthur penal colony historic site in a more realistic light.

The day did not start well. We had only gone a few yards up the road when we realised we had a puncture.  Disaster, or so it seemed when we could not get the wheel nuts undone.  Enter Pino, our next door neighbour at the Shack. We had seen him earlier in the day cleaning the fish he had caught in the bay.  He very helpfully appeared armed with a bigger wrench and more muscle power, we were soon back on the road.  Thank you Pino!

While we were sorting our tyre problem a cruise ship had appeared in the cloudy distance. 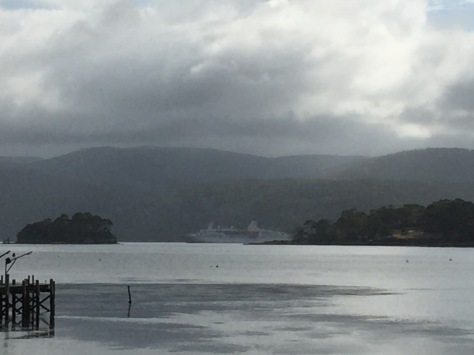 We arrived at The Port Arthur site to find bus loads of people from the ship at the Visitors Centre – our familiarisation visit on Saturday had proved most fortuitous, today there were far more people!   Nevertheless, despite the additional numbers, it was a very interesting visit.  There is so much that could be said, but I will record here the things that have made a lasting impression on me.

Two major bush fires in 1895 and 1897 rampaged through the area and reduced the site to the ruins that can be seen today.

The large main building was initially built as a mill and granary with the mill wheel literally driven by manpower – there was no flowing water supply!  It was converted into a penitentiary which consisted of 136 cells on the lower floors for the most most dangerous prisoners.  These cells were 4ft wide, 10ft long and 8 ft high.  The men would sleep in hammocks that hung by hooks embedded in the wall. The floor above the cells was a huge dining room which doubled as a school, an assembly place for Catholics and a library.  The top floor was a large dormitory, 11 ft high and designed to accommodate 348 sleeping places in two tiers. These were for the better behaved convicts. 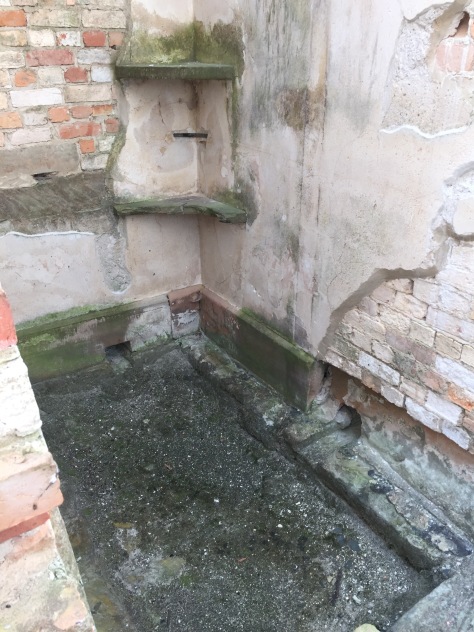 This accommodation contrasted dramatically with that at the Commandants House where he and his family lived in some splendour, complete with a grand piano…….  I noticed that none of the rooms in this or any of the civilian areas looked out on any of the convict areas.  A beautifully laid out garden complete with central fountain provided a secluded promenading area for those who weren’t convicts.

All of the prisoners wore shackles whatever they were doing to stop them escaping into the bush.  Repeated offenders would be given heavier leg irons that would be riveted on.  These could weigh up to 18 kgs. Their uniforms were made of felt, that once it got wet took ages to dry. The outfits were yellow (easy to spot at a distance) and grey and made in a jacquard defect like a court jester to humiliate the wearer.

In addition to the mill wheel, prisoners also powered a man propelled tramway that ran for 6 Km’s and transported people and goods around the peninsula.  Another heavy use of manpower was for the moving of large pieces of felled timber. These were called Centipede Gangs and would form the first 6 months activity in any convicts life at Port Arthur. Up to a hundred men would be required to walk two abreast and move in unison with the wood on their shoulders which gave the impression of a human centipede. It was a dangerous business. A line of men could collapse like a pack of cards if a man in the front stumbled. Men were killed and limbs were  broken or were severed under the weight of a large tree falling during such a calamity.

Hangings and whippings were commonplace but I think for me the worst punishment was that that took place in the Separate Prison. This was a purpose built prison block, aimed at taming the ‘incorrigibles’.  It was based on an experiment devised in the Pentonville Prison in London and worked on the theory that if kept in total isolation, without a name (they were referred to purely by number) and in the dark and silence, the prisoner would come to reflect on their crimes and repent. Extraordinary lengths were taken to ensure total silence, including matting on floors, hoods were worn over heads to ensure that  an individual could not see or be seen by a fellow prisoner when out of their cell for the one hour exercise they were allowed each day.  This was taken alone in a high walled yard.

At the church service they attended once a week they were locked in individual booths to ensure isolation even though they were part of a congregation.  Many of those exposed to this ‘model treatment’  left it insane.  It was a spooky place and not to be forgotten.

(Me demonstrating the way it worked!) 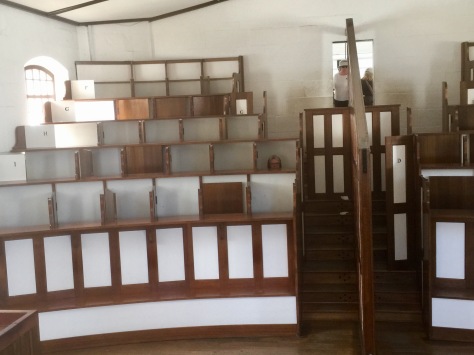 We listened to the history of the buildings and watched a play performed by actors who took on the role of real people who had lived and worked there.  It was disturbing stuff.

We spent most of the day wandering the Port Arthur site and listening to the commentary.  To complete our visit of the goals of the area, we then left to visit the Coal mine,  another penal establishment a short distance away.  Another site of much misery in its time, but established on a wonderful promontory  overlooking another beautiful bay of the peninsula. 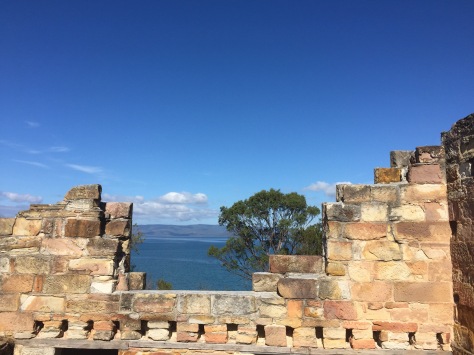 This is probably the least known of the experiment in the punishment of crime upon which the Australian nation was founded. The ‘worst of the worst’ were sent to mine coal.  The miners dug by hand about three tons of coal a day. The quality of the coal was poor and it was a short lived operation.  During its busiest years, 600 prisoners, civil and military officers lived and worked at the mines. By the late 1830’s the majority of coal used in Van Diemen’s Land was produced at the mine. However, after 15 years it was handed over to private enterprise and by 1901 it was gone.  All that remains is some brick walls, some underground cells where the prisoners were housed in what looked like coffins built into the rock and the boarded up mine shaft entrances. 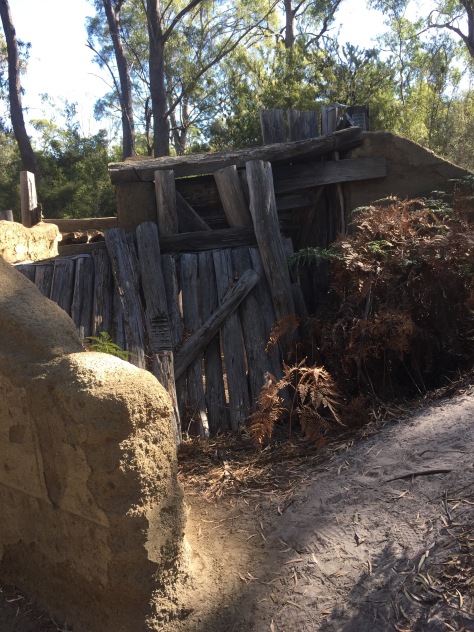 It is now a peaceful bush overlooking the sea with no echoes of the voices that once resounded in the landscape.  It was silent except for the odd birdcall and the rustle of animal movement in the undergrowth.

Keith was by now totally ‘gaoled out’.  It was quite hot and the sun beat down. Time to head back to the Shack to consume the left over food and pack our bags.  Tomorrow we leave Tasmania behind and head to Perth.