We got up early as Wendy and Sarah wanted to go to the market before they took off for Sydney, so we were packed up and had left Hill Street before 8.30 and had arrived downtown and found a parking space before 8.45! The market was already quite active when we arrived.  It was huge.  All manner of different wares were on sale from vegetables to ceramics, whisky to jewellery.  It took nearly 3/4 of an hour to walk from one end to the other.  Different musicians played at intervals along the route.  We were very impressed with the standard of the goods on sale –  some things may not have been to our taste, but there was no rubbish.  As the morning progressed, it got busier but it was all very good humoured and we managed to get away reasonably unscathed financially – our only purchases fresh produce for our stay at Port Arthur, where Helen, Keith and I are heading when we have dropped the girls at the airport.

What we could not believe was that as we turned up through the gardens to meet up by the car, we could hear the dreaded bagpipes again! There,  fully kitted out in kilts and sporrans was a whole group of bagpipe men!  (Collective noun unknown – perhaps ‘a wheeze’?!?) It was as though they came to haunt us – a last lament for the girls leaving Tasmania!

Back in rhe car we headed out to the airport, not twenty minutes from the town centre, over the famous Hobart bridge that spans the broad mouth of the River Derwent as it enters the harbour. To our left there was the smokey evidence of a bush fire raging out in the hills.  Hobart  has been just amazing!  Of course we have seen it at it’s best.  Wall to wall sunshine.  By all accounts, unheard of!

After a sad goodbye but ‘a bientot’ to our chums, we changed our big car for a smaller version, packed up our baggage and the three of us set off for the final stage on our Tasmanian adventure – another prison site – Port Arthur.  Another place that struck fear in the heart of the convict. The men’s prison for second offenders off the furthest south westerly point of Tasmania.  It’s intention, to be ‘a machine to grind rogues into honest men’.  I am not sure that it often worked…..

Our route out, once  we had left the town of Sorell behind where we made our initial purchases what seems aons ago (but is only two weeks) when we flew into Tasmania, took us south towards the peninsula that has Port Arthur on its southernmost edge.  Along the way we veered off to inspect what was described as a  ‘tasselated pavement’. The views along the way were tremendous and we could see the peninsula with its two rocky outcrops on the hazy horizon. 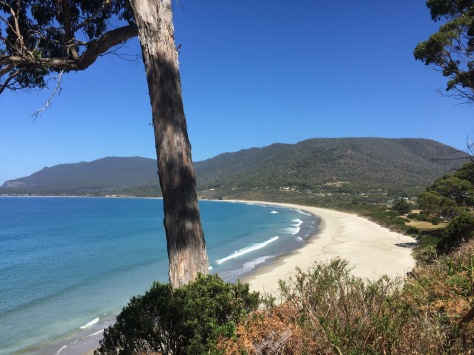 The ‘pavement’ was fascinating.  An area of flat rocks that had been eroded over time by the salt in the water washing over it.  It was like a smaller version of the Giants Causeway in Ireland!  We took the path down to it and wandered along the rocky outcrop and wondered at the straight lines……. nature never ceases to amaze!

Back up the slope we were on the final leg of our journey.   The isthmus at Eaglehawk Neck is only 78 yards across at its narrowest, where the peninsula joins the mainland of Tasmania.  In past times it was guarded by ferocious dogs (deer hounds and mastiffs). chained in kennels at yard intervals, to dissuade any ‘would be’ escapee from the prison from trying to cross it.  Today it is overlooked by houses that are banked up on the hill on the surrounding hills, with amazing views over the water on either side.

Passing the entrance to the Port Arthur Visitors site, we decided that we would first go and find our accommodation.  To our delight, (Keith had excelled himself!) our home for the weekend was a wood built bungalow named The Shack overlooking the water.  In addition, we were subsequently discover, we looked out on The Isle of the Dead, the small island in the middle of the bay where the inhabitants of Port Arthur were buried.  Military, freemen and their families at the top of the rise with tombstones.  1,769 prisoners buried in a lower area with nothing to mark there passing .  A hierarchy even in death! 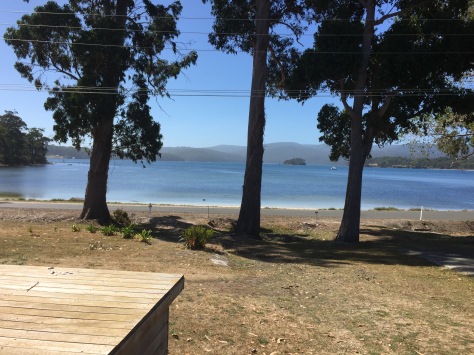 To the right along the coastline we could clearly see the remains of the Point Puer Boys Prison, a purpose built juvenile reformatory where boys as young as 9 could be transported.  The average age of the boys held there was 14.  The boys were kept separate, as a new development, to protect them from the criminal influence of the older convicts.  Point Puer was renowned for its regime of stern discipline and harsh punishment, but all the boys were given an education and some the opportunity of trade training.  For many a better life than in the industrial cities of England at the time……

Now might be a good time to comment on what led to the setting up of convict centres miles away rom England.  The concept of the transportation of ‘undersirables’ had started in the 1700’s with people (criminals or religious heretics)  being despatched to Virginia in America.  A combination of the onset of the Industrial Revolution, seeing large numbers of people leaving the land for the cities, and the return to England of soldiers at the end of the war with France with no jobs to go to, saw increasing pressures on the need to maintain law and order and what to do with recalcitrants.   The number of ‘undesirables’ increased and when the Declaration of Independence occurred in America there was a need to find a new destination for the large number of offenders that was building up…….. they found the answer in Australia and subsequently Van Diemen’s Land.

In order to make the most of our day, we took off for the Visitor Centre again, bought our tickets and took the harbour cruise to see the site from the water and then the introductory walking tour to get ourselves familiarised with the site ready for closer exploration on Sunday.  A good plan!

Before the boat trip we past enormous trees planted in the 1830’s and glimpsed at what would have been the dockyard. Now a rusting metal sculpture of the ribs of a ship indicates where the shipbuilding took place. During its 25 years of operation, it produced 16 large decked vessels and 150 small open boats.  At its peak, 70 men worked there and it incorporated a blacksmiths workshop, two sawpits, two steamers for bending timber a rigging shed and several other workshops.  It would have been a hive of industry.

Our short harbour cruise enabled us to see the Dockyard, the Island of the dead where we  could see the headstones through the trees and the shoreline of Point Puer Boys Prison.

The walking tour gave us a good overview of Port Arthur, its people and its past.Port Arthur covered an area of 100 acres.   At its peak in 1840 more than 2,000 convicts, soldiers and civil staff and their families lived there.  A range of goods and materials were produced there – everything from worked stone and bricks to furniture and clothing, boots and shoes, boats and ships.

When the transportation to Van Diemen’s Land in 1853, the flow of convicts stopped and Port Arthur became an institution for aging and physically and mentally illconvicts, finally closing in 1877. For a short time it became a small town renamed Cararvon to disassociate it from its convict past but it was found to be a tourist attraction and by the 1920’s it was Port Arthur again and an historic tourist attraction was born.

For us, it was time to adjourn to the beautiful view from the deck of our Shack. Here we watched and listened to the birds on the beach whilst pondering on the lives of those buried on the Island of the Dead, with a cold beer in our hand. ….
PS you will be amused to note that I was almost lost in the bathroom of the Shack when I appeared in almost identical colour tones!

One thought on “Saturday, 4th March”