Helen has now rejoined us.  She flew in late yesterday afternoon, her mission accomplished. As the others had all been to Hobart before, Keith and I decided to take off for an exploratory tour of the City while the others went off to Bruny Island.

We set off on foot down the very steep hill to the City centre.  The houses en route were remarkably English looking with bay windows and front gardens often with roses and fuschias interspersed with the more exotic Australian flowers. At first glance the City looked a fairly typical town centre although it’s steep hills seemed slightly reminiscent of scenes I have seen of San Francisco.  Having never been there it is difficult to say whether this was a realistic comparison.

However once we reached the harbour it was rather different.  As it was quite warm, circa 28 degrees, we decided to let someone else take the strain and hopped on an open topped bus to make a tour of Hobarts highlights.

We first took off along the water front which used to be busy with the shipping of fruit from Tasmania- apples, cherries, soft fruit and berries – throughout the world.  This trade has now diminished and the sand stone warehouses have been given over to bars, restaurants and art galleries.  There is a famous market held in the area every Saturday – the Salamanca Market. The imposing old custom house, now the Tasmanian parliament building looks on ponderously.
Hobart harbour is over three times larger than Sydney harbour and it is where the famous Sydney to Hobart yacht race ends.  The city is overlooked by the huge Mt Wellington which can be seen at every turn and rises 4,100 above sea level.

Our tour gave us a good overview of the place including the huge bridge that crosses the Derwent River as it runs into the harbour. (Apologies for the poor quality of this picture – taken through the bus window.) 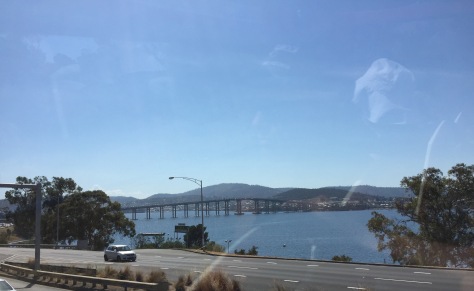 Leaving the bus, we wandered around the harbour and had a fish lunch overlooking the water.  There was quite a lot of activity, with ferries coming and going, yachts going through their paces and serious looking fishing boats moored up.

Leaving the harbour behind we decided to take a walk around Battery Point.  This area used to be home to a close knit working class community.  The majority of the people worked on the waterfront, had little money and large families.  Although the French were the first Europeans to visit Tasmania, the British arrived in 1803 and took the island over and the buildings have a strong British feel. Occasionally we came across larger, more imposing residences like Narryna, once owned by a Scottish whaling captain called Andrew Haig. 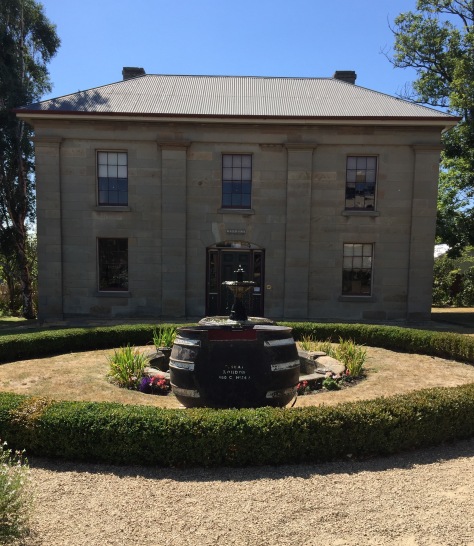 Within two years of his building the house his fortunes had changed, there was a down turn in whaling and he had to move out.  Many of the buildings were much smaller and there was a little row of shops, now trading as tea rooms and boutiques, that marked the centre of the ‘village’. 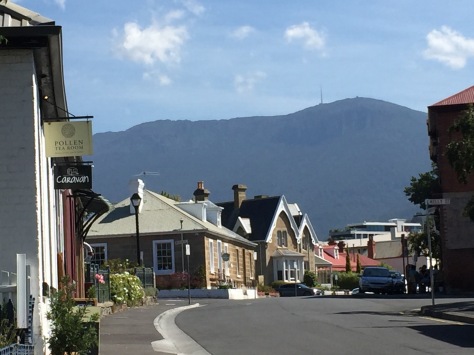 The most notably ‘English’ area was Arthur’s Circus.  For over 100 years these crowded working class cottages housed large families whose livelihood depended on the waterfront. They now sell for $1,000,000 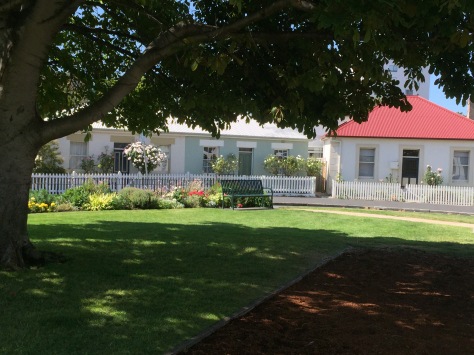 It was a great walk, but having taken in the history, a beer was definitely required and we adjourned to Salamanca Place to watch the world go by under the shade of a much appreciated umbrella.
We then took a taxi, rather than climbing the steep hill to our eyrie, and a quiet evening at home ensued, prior to another exciting episode tomorrow.