We had booked to go to the Cascades Female Factory, the title given to Hobart’s women’s prison. We walked down the hill and along a shallow waterway called the Hobart Rivulet.  Our view of it was of a little water trickling over shiny, exposed rocks.  In the days of the Factory it carried sewage and the detritus from the tannnery on its banks, worked the mill and on a bad day flooded the prison yard, particularly the punishment cells because water drained their way.  It was a three km walk along the river bank in the sunshine.

Between 1788 and 1853 some 25,000 women were transported o Australia for their crimes. The crimes they committed were often petty and related to keeping a family fed.  Approximately half came to Van Diemen’s Land and most of these spent time in one of the five female factories on the island.   These establishments served many purposes: as a prison, a place of punishment, a labour hiring depot, nursery, a lying-in hospital for pregnant female convicts, a workplace and temporary accommodation until they were ‘married’ or assigned to free settlers or colonial officers at the end of their sentence.  It is thought that 13,000 female convicts came to the island between 1803 and 1853 and of these 6,000 spent time in the Female House of Correction or, as it was known, the Cascades Female Factory, at the base of Mount Wellington. 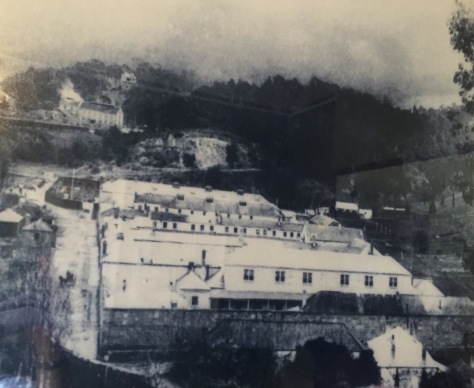 We arrived early (we had booked in for a theatrical portrayal of life in the prison), so had time to tour the site beforehand. We were there on a beautiful sunny day in 2017. 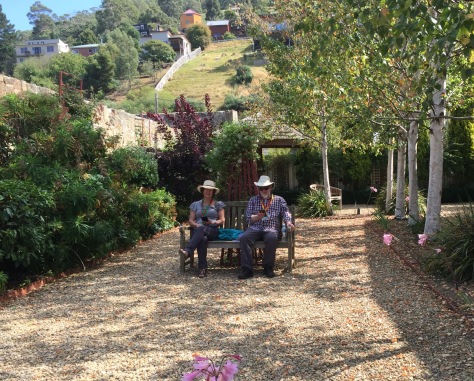 Two reprobates found in the now pretty courtyard  3 of the prison, the scene of misery to so many in times gone by.

Today the yards are empty and the 13 ft high walls that divided up the  areas are gone.  In its day each yard (and ultimately there were five of them) had two-storey buildings lining each side of the yard with day rooms to house the women, a hospital kitchen and nursery.  The courtyard in the centre was divided into seven individual yards one for the entrance and offices, one for each of the hospital, nursery and a yard for each classification of women adjacent to their sleeping rooms and work spaces. There were 12 solitary confinement cells in the north west corner and a chapel and storerooms in the centre.

These places were hell on earth.

In the Matrons house, the only original building still standing, the registers of the names of the prisoners tell their awful story.  The folder listing the infant deaths at the prison is, in some ways, even more harrowing.  I thought the rusting metalwork representations and ground markings to show where walls had been were quite effective in helpin is visualise the place.  The actors’ betrayal of life in the prison told a very powerful story. Those women who worked within the prison picking oakum, washing for the prison and other institutions, mending, sewing  and cooking were subject to appalling conditions, underfed, in the summer worked 12 hours a day (they worked daylight hours) and were treated with extreme brutality.  Those who were ‘hired out’ were subject to the vagaries of those who hired them for work.  Often these women would be returned to the institution pregnant and would then, after the. delivery of their child,  be placed in solitary confinement for 6 months as a punishment for a ‘crime’ they had no power to prevent as they were literally slave labour.   The child would be taken away very shortly after its birth and put in a nursery where they were ‘packed like sardines in brine’ as one commentator of the time put it and placed ‘nose to tail’  in cribs, often covered black with lice. Another contemporary comment was that the ‘babies were silent, too weak to cry’.  If they survived, the children would eventually be sent to an orphanage and never seen again. Survival was a big ‘if’.

Another punishment was an iron collar placed around offenders neck.  This weighed 9 lbs. This device fitted close to the neck and was about two inches deep.  It had 6 ins spikes all around it making it a permanent torture, sleep would have been impossible with it on.  When it was removed it would have inevitably cut into the neck and done permanent damage……. 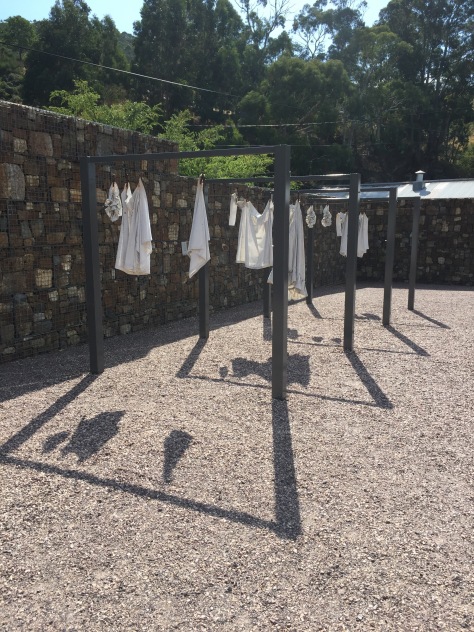 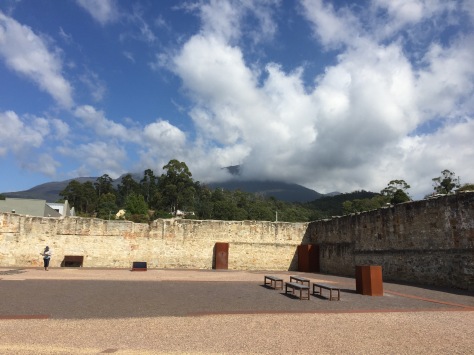 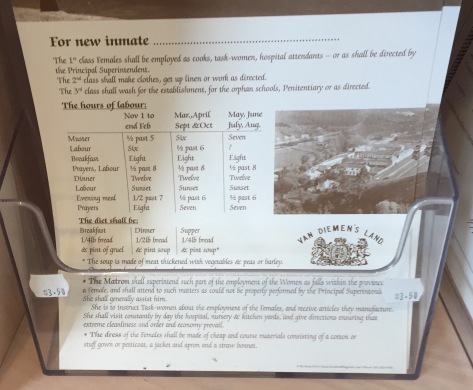 The plight of these women was the concern of some and attempts were made to improve their lot.  However nothing could really improve matters, particularly the issues of overcrowding (at one stage there were 700 prisoners in a space for 200) and the fact that due to the high walls around the place, very little light got into the yards. 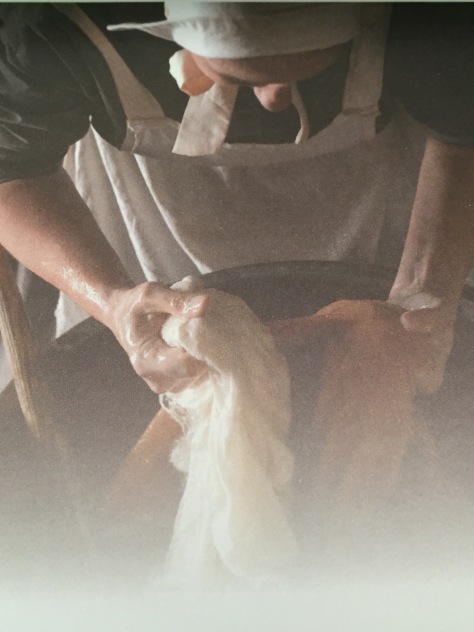 The actors brought to life the unrelenting harshness of the regime in which the women lived.  The lightest disobedience to the rules was punishable.  Most never returned home and there was a very poignant letter that has survived from a man to his wife who was transported to the prison. It was heartbreaking.

After this sobering experience we were lucky enough to be able to adjourn to the Cascades brewery which is located, rather ironically I thought, a little distance away where we reflected on what we had learnt over a drink and then meandered home to our accommodation on the hill.

Keith and I had decided to go out to dinner at a local restaurant called Templo.   It was excellent. Amazing food produced by two very young chefs.  There were just twenty covers and it was very social. A great night out.  Then it was back up the hill and home to bed.

We are heading to the MONA art gallery on Friday for a bit of culture…….