we were up and about early again as we wanted to do a walk Sarah and Wendy had done parts of before from the lighthouse about 10 kilometres away back along to Port Macquarie and no one likes walking in the heat. 26 degrees was advertised.  We drove to our start point and parked the car just down from the lighthouse.  It was another beautiful day, although cool at 8.15 as we started to walk. The sun sparkled and flashed on the water. 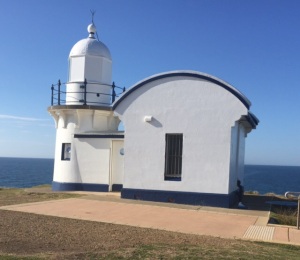 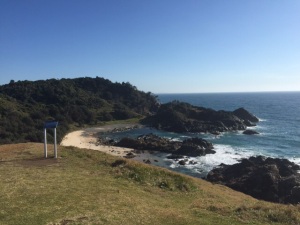 Beyond the lighthouse was another long and deserted beach, but we turned back to walk to back to the town on a route that would take us along beaches and rocks and back up into the rain forest that ran along the cliff top.

We set out, occasionally passing someone coming the other way, but mostly we had the place to ourselves in the early stages of the walk. As we descended into the first cove three cormorants were silhouette against the skyline on top of the rock.

As as we moved along and climbed up to the rainforest area, we could look back and see the lighthouse fast disappearing into the distance. All around us birds called. Some were beginning to nest and our movement provoked shrieks of alarm.  The path twisted and turned as it progressed along.  Gradually more people were about, mainly coming towards us. 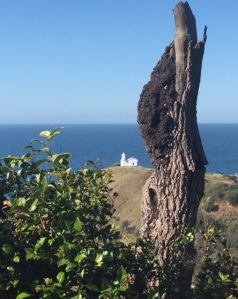 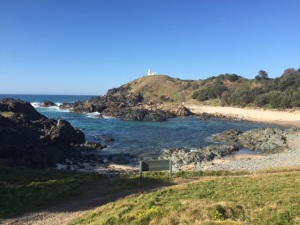 On one high point we came across several people with binoculars on tripods standing along the cliff edge looking out to sea.  With the usual inquisitive tendencies that materialise when you see somebody looking at something you can’t see, we sauntered up and peered out on the ocean, not at all sure what we were looking at.  There was a very small boat bobbing about on the bay and it transpired that our peerers were watching for whales and were linked to the boat by radio and directing it to where the whales were.  Hmmmmm.  We could see nothing, even Keith with his birthday binoculars was sceptical.  There was the usual story that a whale had been sighted just beneath us very close to shore just before we arrived………. Right!?! We hovered for a bit and then got bored and sloped off. There were notices all  along the route indicating that whales could be sighted between April and early September but it was not to be for us. We did see some marine life later – but I think it was only Dolphins.  I say ‘only Dolphins’ as though they are part of our everyday occurrence!  They just feel a bit down the pecking order here……

Our next excitement was to descend down to the beach level to the dog exercising bay.  A number of dogs were on parade 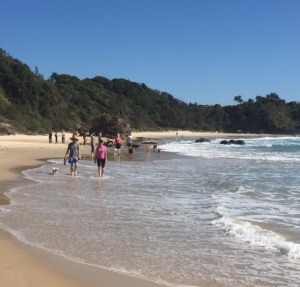 and they came in all sorts of shapes and sizes – a bit like people really!

it was then time for a pit stop and coffee break for the coffee drinkers.  The next beach had sort of grey green rocks – not described as ‘remarkable’ although it seemed it to me – said to be 465 million years old.  I just cannot comprehend that distance of time.  Looking at it now I think that can’t be right, but I made a note at the information board so I guess it must be. 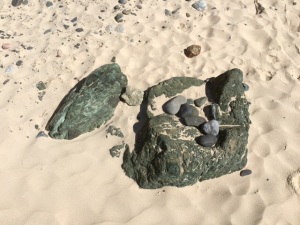 We were gradually getting closer to Port Macquarie and found ourselves passing our accommodation   As we looked along the harbour wall, we could see man coloured boulders forming part of the sea defences   As we got closer it became clear that people, families, groups of friends – all sorts really – had taken over the large rocks and written on them.  Some denoted the passing of a friend or family member, some just an event or gathering   It was just fascinating.  Some were covered in pictures, others with words.  Along side them brass plaques in the ground recorded the many ships that had been wrecked in the bay.  All formed part of the great Australian history – past and more current.

We dropped by a local boat company and booked ourselves on to a river cruise to watch the sun go down later in the day.  It had become a bit blowy and looked a bit choppy by 4.00 pm when we set off for this jaunt, but in the event it proved to be a very pleasant cruise around the river inlets of the bay and it was very sheltered.   We took our own beer and some nibbles and spent a very pleasant  hour and a half looking at the houses along the waterfront and watching the sun sink down on to the horizon.  The boat owner was a very laconic character who occasionally pointed out things of interest and played a selection of easy listening music.  We had fun identifying the artists  they must have been old hits – even I was able to get some right. 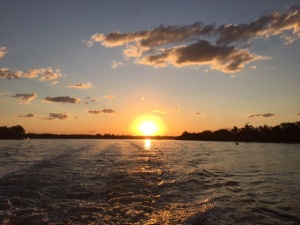 it felt very late when we got back to shore – it was 6.00 pm.  We returned home to gather ourselves a bit as we were off back to Sydney the next day before eating supper and adjourning early.