Again we woke up to sunshine. Wendy wanted to get on the road early, so by 6.30 we were all up and getting things in order. By 8.30 there was no sign of our ever having been in Peter’s house except for the leftover food in the ‘fridge. It was as though a plague of locusts had arrived, spent two days with their associated noise and then departed. I am sure that once we had gone the peaceful silence would have descended on the house once more and Peter’s shoulders will have equally descended to their natural position and away from his ears!

Our goodbyes were as emotional as our reunion. Big hugs and ‘we’ll be back’ and I am pretty sure we will. For Keith it has probably been the most special time. He just soaks up Peter’s knowledge of birds and wildlife like a sponge. It is great to see.

Goodbyes over we left Oakleigh (Peter’s house) and set off down the track accompanied by one or two wallabies still taking the morning air. We were all pretty quiet for a bit…… Spending time with Peter who had so generously shared his encyclopaedic knowledge of his surroundings with us had been an incredible experience. However, we had to move on and it was the waterfall route heading towards the coast.

Several waterfalls were visited – enormous gorges with water gushing down their deep cliff sides into unseen depths. The sun was not good for photographs of any of them…….First the Wollomombi Fakks 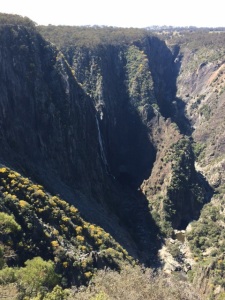 Then the Ebor Falls

I think both of these were in the Guy Fawkes National Park – I do not cease to be thrown by the Australians’ ability to name things after English places or figures, but  why Guy Fawkes!?!

Peter had told us to visit the Skywalk in the rainforest in the Dorrigo National Park.  They do National Parks very well here in Australia. There is always information, accommodation for picnics or longer camping stays, barbecue facilities and loos that China could certainly learn something from!

The Dorrigo version had the addition of a wooden planked walkway extending out over the canopy of the rainforest. The view from the lookout point at the end was tremendous. In the very far distance was the sea, a slightly different shade of blue to the blue grey of the distant hills. Between us and them were miles and miles of forest. It was great and even Keith, rather surprisingly enjoyed it. 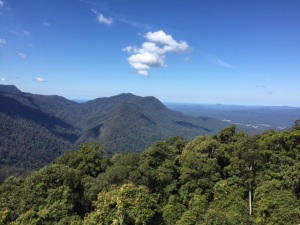 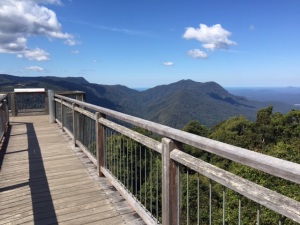 Moving on from the Skywalk, we arrived at the rather hippie town of Bellingen. Now that was another experience!  The young men had beards, pony tails or even buns and wore flip flops and baggy trousers or dungarees. Several of the women wore 60’s long skirts and were walking barefoot.   Another young woman in the cafe where we ate was breastfeeding a child of perhaps 4……. Interesting stuff. Nevertheless we had an excellent fish burger and lovely fresh juice of apple, lemon and ginger. It was yummy. We had a wander around the town and found a first class bakery making rye bread and an organic fruit shop housed in an old bank building. There were lots of bars with whole family’s enjoying the sunshine.  It was California reproduced in Australia.

Our accommodation for the next couple of days was to be Port Macquarie on the coast.  Sarah had done an amazing job of finding some wonderful accommodation overlooking the beach at a remarkably low price.  We went and augmented our travelling larder and beer supplies on the way there and within no time the car was stowed away In ts lock up garage beneath the building and we, together with our luggage and supplies, had all taken up residence in our 4th floor eyrie   it was all very efficient and satisfactory!

We all had sea views from our room and could hear the sea on the balcony.

One thought on “Monday 14th September”