The girls could be heard chatting before 7.00. We did not get up for the breakfast waffles or the run around to work off the sugar rush, but joined the family for breakfast when everyone had gone. Justine, perfection as always, had organised, successfully devised and implemented an exemplary birthday party and had not turned a hair. I am in constant awe!

We had a fairly lazy day which included a blowy visit to the secret beach, further along the northern beaches. This was a lovely cove of pristine sand that can only be reached on foot.

An interesting occurrence on our way back was the sound and eventually the sighting of three young bagpipers playing while standing on the edge of the cliff! Who would have thought it! 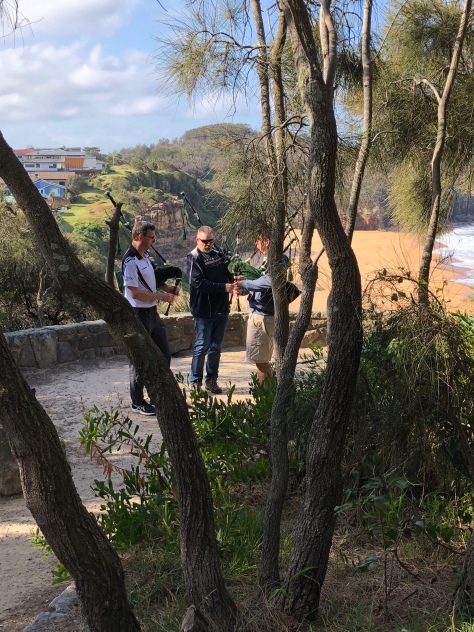 Keith cooked more fish for supper – his version of fish fingers – and the time came for the final birthday activities. We went to the cinema. Not any old cinema but the Gold Class cinema experience. This, much to our amazement, comprised the opportunity to buy cocktails to be delivered at a time of your choosing to your plush reclining double seat while watching the film! It was hilarious, not least because we were watching ‘Johnny English Strikes Again’. What a hoot!!