It was not a good night. Fear about not waking up together with angst regarding the trip itself rendered us both restless and wakeful. At well before 5.00 we were both awake but somewhat reluctant to be off. Would we be rejected for being too old, too unfit or maybe just not being ‘backpackers’?

We had to admit to a fair degree of trepidation as we set off into the dark pre dawn street. There were no people about. A lone car passed by. As we approached the Britannia we saw a tiny figure waiting outside with an enormous rucksack on her back. It turned out to be Maya, a soon to be fellow traveller, from Japan. I think we were all pleased to see each other as an acknowledgement that we were in the right place.

As the day began to get light there was the roar of a truck. The vehicle to be our roving home for the next three weeks had arrived. Our driver/guide/cook/mechanic got out, read our names from a list, let down a short ladder from the back of the truck to take our luggage on board and told us to get in. He made no further comment. We guessed we had been accepted! Next stop Perth youth hostel….. here the balance of the party climbed on board. In our estimation all were under 35: the majority under 30 and the majority of these were under 25. We could have been the grandparents of all of them!

I am sure our assessment of the situation was as quickly assessed by them…. their faces on seeing us was a picture!

All aboard (the bus was full), we took off.

It did not take long to leave Perth and we were soon out on the Indian Ocean Highway. In ancient times this area was a vast sea, giving rise to the salty limestone sand of the area. We were travelling at sea level. It was what we have come to experience as bush country. The ‘Black Boy’ grasses we had seen on previous visits were very much in evidence. Very little of the land had been cleared for farming. There were few crops. When they did occur, vast sprinkler systems could be seen.

There was very little traffic. The ubiquitous telephone wires ran parallel to the road. There were very occasional buildings. Our first stop was a town called Lancelin. Originally a whaling town (whales were hunted for oil), conservation has seen an end to this industry and it has become an area based on fishing, mainly lobster. Most of the large villas dotted around the town are the holiday homes of high earners from the mining industry east of Perth. It had all the trappings of a sleepy village by the sea. The deep blue ocean ran up as white foam onto the beach. We headed to the bakery which was doing a great trade in breakfast pies and sausage rolls……. we sat outside the bakery making the small talk of a newly gathered group of people – all secretly weighing up each other, and all wondering what these two elderly people were doing there, including us!

As we left Lancelin behind, the trees stopped and we were looking east over a flat fertile plain and soon came to our next stop, the Pinnacles. These were stone pillars bristling out of bright yellow sand. 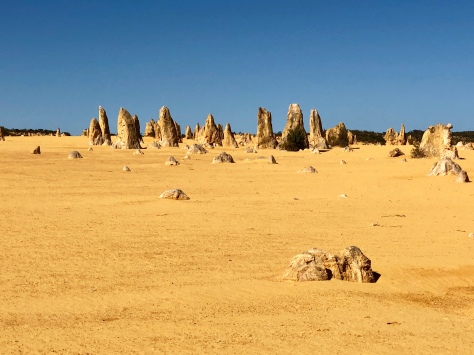 It was a remarkable sight. Initially we were reminded of the rocks of Cappodocia in Turkey, but on closer inspection they had a very different form. The limestone columns were around a maximum of three meters high. There are various theories about their formation, but there seemed to be no clear front runner. Several theorists describe them as the solidified tree roots exposed over time by winds. Who knows – but they made an interesting interlude of walking and pondering in bright but breezy sunshine.

We drove on and eventually stopped for lunch at Jurien Bay. Another whaling town now reduced to fishing village. We stopped on the coast road and had our first truck lunch of the trip. It went very well (from our experience!). The truck larder was well stocked with goodies and people in the main turned to to lend a hand.

Shortly after lunch we stopped at the Sandy Cape National Park where sand boarding took place for those who wanted to partake of the activity. Keith and I watched with others as they hurled themselves down the dunes on candle waxed boards. Interesting ……

Back on the truck it was, apart from a brief stop for petrol, and a later stop off at a bottle shop to take on alcoholic ‘vittels’ for the long haul to Kalbarri, our stop for the night. Although only 7.30, it had been dark for some time when we arrived and we had driven for well over an hour in the red after glow of an amazing sunset. By Kalbarri we were in total darkness save the light of a nearly full moon.

We unloaded our bags and decamped into our dormitory accommodation. It was communal but clean and the shower was good. We had a good supper during which the vexed question of who wanted to do some abseiling on the morrow was raised. I think I might……..

One thought on “Saturday 25th August”