We woke up in our hacienda style hotel to a bit of a lazy start. Breakfast was served on the first floor overlooking the tropical garden garden. 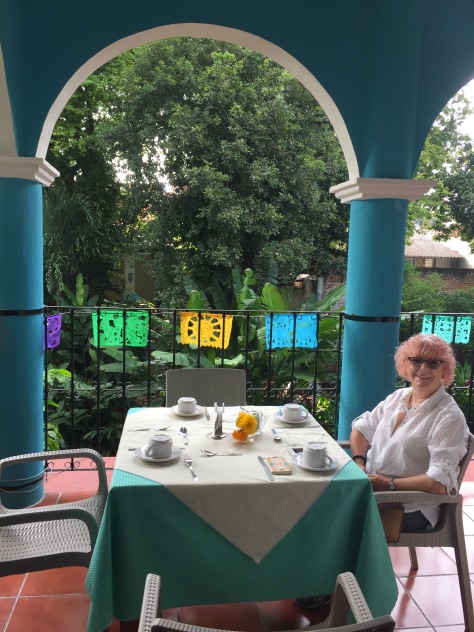 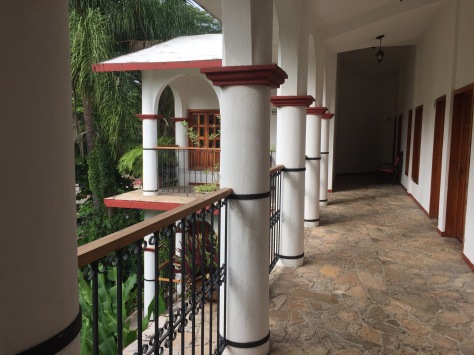 Walking back to the square for the coach we saw in daylight that some of the houses did not seem have glass at the windows but metal work and shutters which was why we could hear the talking so loudly when we walked to the hotel.  Having said this, the town felt prosperous with a big tree lined square. 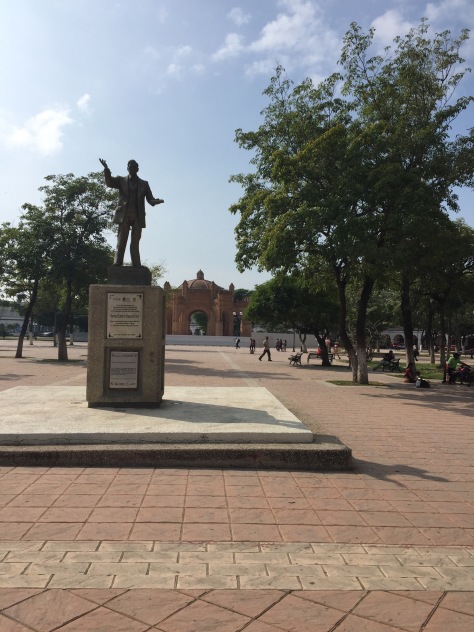 There were a number of very young children selling small items, they were not intrusive just bare foot, grubby little bobbins sent out to try and earn some pesos.   They did not look more than five or six…….

It was a short coach ride to the Sumidero Canyon where we all donned life jackets and some very interesting wrist bands ( these were apparently numbered – to be able to identify our bodies if we fell in, I wondered?).  Suitably cuffed, we took our place on the motor boats which were to take up the River Grijalva. With a roar we took off – no quiet skulking across the water on this trip – and we soon entered the canyon. The cliff sides soared above us. Initially they were covered with trees but this covering disappeared and the mottled rock was exposed. The route narrowed and at the point the precipitous sides were at their highest we were told that it is said that hundreds of indigenous Mayans jumped off the cliff top to their deaths rather than become slaves to the Spaniards. 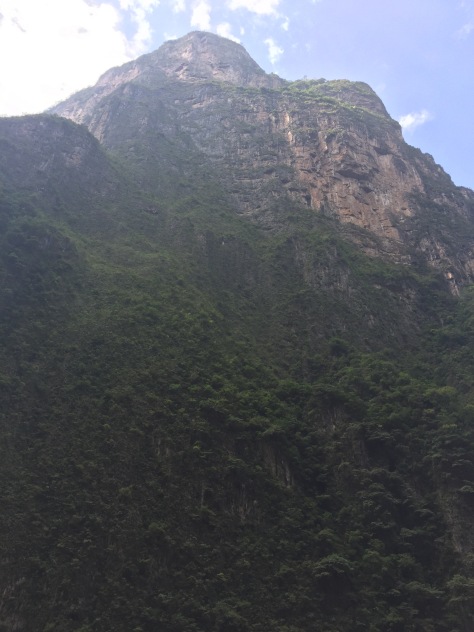 Along the way we saw vultures, herons and pelicans, crocodiles and spider monkeys all living out their lives beside a stunning but heavily polluted waterway.

The detritus of humanity was sadly only too evident as plastic bottles bobbed upon the polluted water. Apparently it is cleared daily but it is obvious that the battle against the polluters is being lost. How can people see the mess and choose to add to it?!

In one cave, high above us, was a shrine to Mary of Guadeloupe, patron saint of Spaniards. She does seem to turn up everywhere!!

Back at the on dry land we had a quick beer and we were off again, this time to experience one of the weirdest things I have ever seen. We had been told that the Tzotzil people of the next town had an interesting approach to Catholicism – and so it proved.

Having left the coach on an area overlooking the town, we walked down passing the graveyard of the old, original church now abandoned to a newer building in the town centre. However, instead of the highly decorated and brightly coloured cemetery dressed for the Celebration of the Dead in Oaxaca, in St Juan Calhamula, the whole area was covered in pine fronds. There was some evidence of decoration on the graves, but this was far less bright and though there were some marigolds (a key feature of the Celebration) it was a far more sober affair. 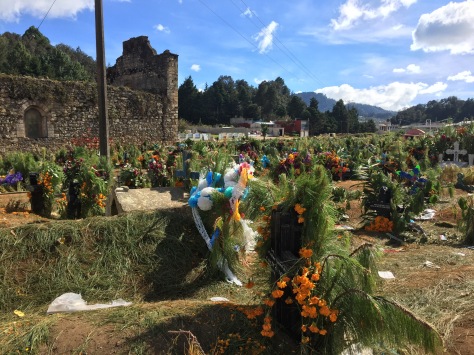 This difference was nothing compared to what we were to find in the church. Having walked through the market, with stalls piled high with fruit and having passed ladies all similarly dressed in thick, hairy, woollen skirts and unusual blouses, we stood looking at a brightly painted (a blue/green and white) church. No real difference to another church so far, but inside was a very different thing. 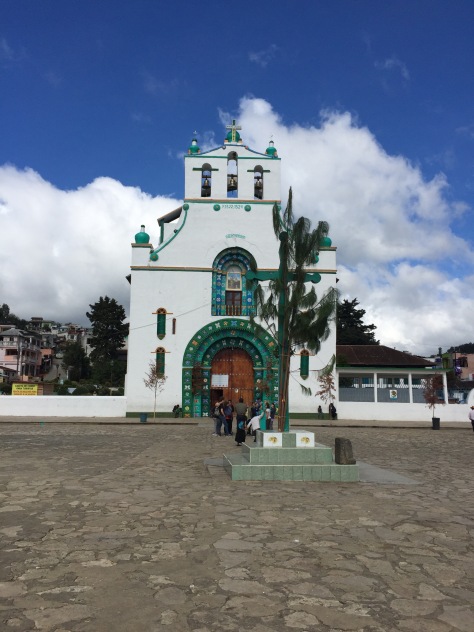 My immediate sense was that of the smell of pine. The floor was strewn with the same pine fronds we had seen at the cemetery. There were no pews, but there were small clusters of people around, their faces lit by the army of thin candles alight in front of them on the floor. Down both sides statues of named saints stared blindly out of their glass enclosures. Immediately in front of them were tables bearing ranks of candles in glass containers. At the far end of the church stood an alter bedecked with white flowers (mainly lilies) and in the centre an even bigger glass case, this time housing a statue of John the Baptist. Overhead, banners of a white and blue material met at the ceiling giving the appearance of a guard of honour over the whole affair. The scene itself was unusual but what was taking place on the ground was even more unexpected

Each group of people were involved in a ritual that not only involved the candles, but bottles of  several liquids (some clear, the local hooch called ‘Posh’ and Coca Cola, a revered drink in the area and sometimes fed to babies in their bottle……..) and live chickens. Yes, live chickens. Most of the family groups had them quite clearly. The ritual involved sprinkling the various liquids over the candles, a lot of incantation by a shaman or member of the group and then, ultimately, sacrificing the chicken. I have to add that we did not see the demise of any of the birds when we were there, but they were being waved over the candles and often an article held by a member of the group. It was weirdly fascinating.

Apparently the people of St Juan will go to the church to perform these ceremonies at the time of worry, illness or crisis to get advice and counsel through their interaction with whichever saint they feel most appropriate. This mix of pagan and Catholicism is quite extraordinary. No photography was allowed but I did try a rough sketch of the scene to capture it and try to make sense of something which was quite bizarre but obviously totally believable to those involved. 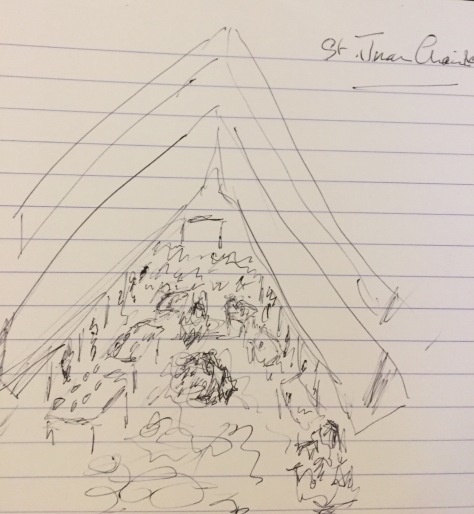 There is no hospital in St Juan Calhamula. The worry of an illness is taken to the church and a shaman consulted. The outcome and result of the ritual is accepted, even when it results in a death.  I was interested to see several particular things – that it was often the women who were in charge of the ritual, that the chickens seemed perfectly calm and unstressed (there was no clucking or struggle to be free) and that in one incidence I saw a man standing in front of a the figure of a saint and seemingly talked directly to him.  It seemed a long and involved monologue……..

I think we all left the church puzzled and thoughtful, but this mood was soon broken by the sellers of the local amber, shining it green with their torches to prove it’s authenticity. A far more understandable activity to that we had witnessed behind the colourful stuccoed facade of the church……

We returned to the coach. There seemed more evidence of very small children quietly and not demandingly begging. Girls with younger siblings tied to their backs, small caricatures of the mother’s they will become.

After all that excitement, it was about an hour’s journey on to St Cristobal de las Casas. A lively town of the area of the Chiapas.  It was a distance to the hotel, along very high and pitted pavements on streets too narrow for our bus.  In the early evening Ana took us all down to the town for ‘orientation’.   We are on our own tomorrow as it is a free day.