First was the 2,000 years old Tule tree. Still growing some say (others that it’s dead!).  It is enormous.  It stands in the corner of a church yard where, interestingly, a church bell tolled presumably calling the faithful to church even though the gate was firmly locked. The clanging continued for the whole of our visit. We still had some way to go to “6.00 so it was all a bit challenging on the senses! Please note it was not yet dawn…….. 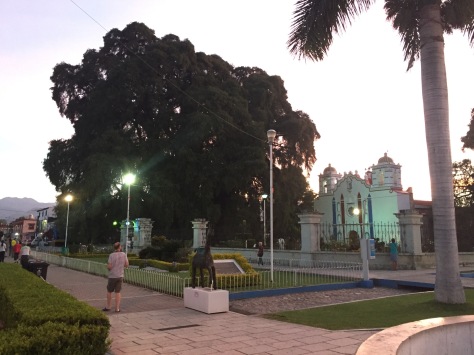 Next stop, a carpet weaver. This was all pretty rustic but amazingly effective and the colours besutiful – dyes from local plants and the long suffering cochineal grub of course!  It was a painstaking process of carding, boiling and spinning before you got to a the dyeing. The rugs were wonderful. I maintained a high resistance some will be pleased to hear! 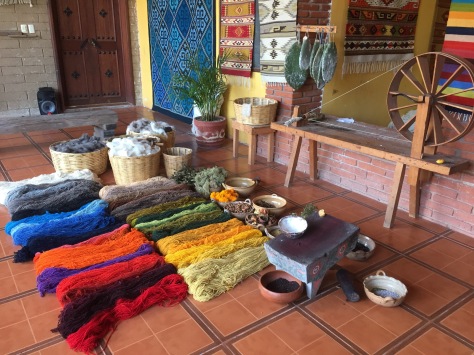 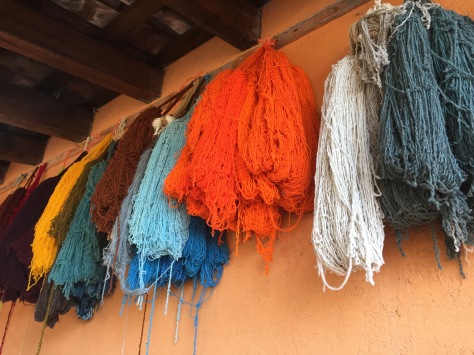 Next up was the mezcal producer. Once again a very basic process, made from the agave cactus. There was burying and grinding, boiling and distilling. It was still not 7.00 am and we tasting strong liquor! Extraordinary! 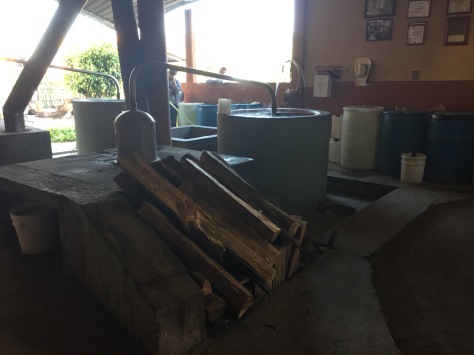 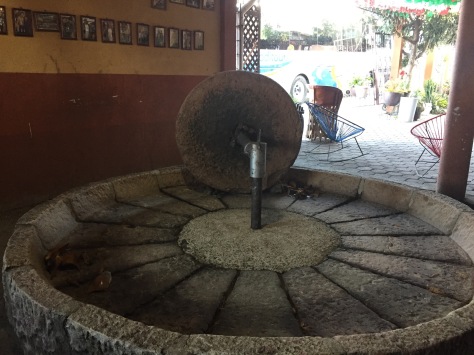 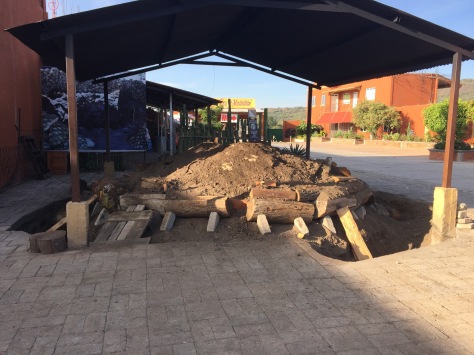 We then briefly visited Mitla, a small but important ritual site with stone geometric patterning which we haven’t seen before. Behind it was the three terracotta domed church of St Paul, built by the Spaniards with the materials from the sacrificial temple. 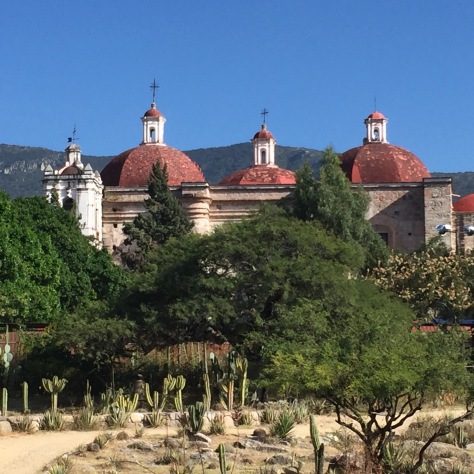 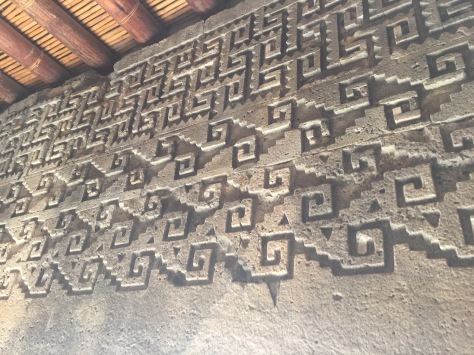 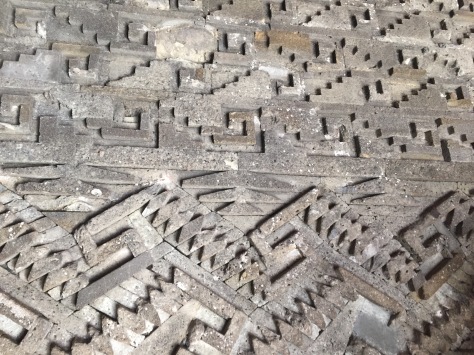 Next was breakfast. This was served in a neat cafe with gaily coloured chairs. The scrambled egg was surprisingly good. We were then on the road proper and it was not long before everyone on the bus was dozing. I slept solidly for two hours. I fear I missed some more amazing scenery,  although I was vaguely conscious of a very winding road snaking through a deep valley with steep tree covered hills on either side. There was no stop for lunch (we had been advised to bring the food we wanted but I was not really hungry) and we continued on through the countryside, occasionally passing a settlement or even smaller cluster of houses along the side of the road. These looked as though the people were barely scraping a living. Thin dogs could be seen sleeping the day away on dusty forecourts.   Barefooted children played in the dust.

The day disappeared in a dozing haze. Each loo stop exposed us to a hotter and more humid climate. Darkness came and we were still travelling. We eventually arrived at Chiara de Corza. I sensed a more wealthy and prosperous town. Like many parts of Mexico, the people of this area do not speak Spanish but continue to use their indigenous language.

The hotel was down a side street off the main square. Some way down a side street. In the houses lining the street we caught glimpses of the families inside. Through open doors and windows came the sound of talking and laughter. We eventually reached our hotel and the sound of people splashing in a swimming pool. It all felt a bit unreal. Clutching our keys, air conditioning device and sweets, to get to our rooms we passed lush almost jungle vegetation only to find that we were on the third floor and there was no lift. Disappointing. The room was fine once we got the air conditioning to work, but the shower fell some way short of perfect. To wash your hair you had to position yourself under one of the three trickling ‘jets’ (?!) (a contradiction in terms?) of water……. tricky. And so to bed.