An unexpectedly bright and sunny day!! Great news! The weather forecast has been so dire for Sydney and to wake to sunshine was a real treat!
We decided to walk across the Sydney Harbour bridge. It is possible to climb the bridge and walk across it on the metal work so much a symbol of the Sydney Harbour scenery.  Fresh from the Walpole High Tree Walk experience Keith was quite clear that he was not going to climb the bridge, but that we would walk across it. Fair enough.
So we set out to walk down the hill to get the fast bus route rather than take the lengthy bus ride from the Collaroy Plateau to the City. The route down gave us another view of the sea. 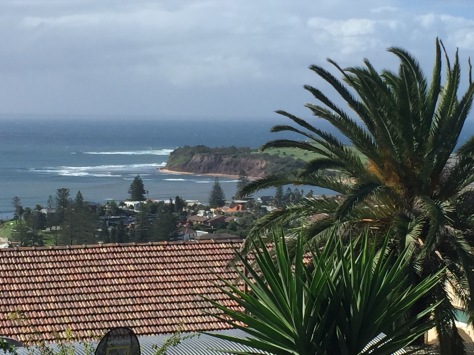 We found the venue identified as our rendezvous with Sarah, Wendy and Peter and had a brief wait before the bus arrived and we were off to Sydney centre.

We decided to head for the Rocks area initially, the original location of the city settlers. First we came across a large church and buildings associated with an early Irish convent. Today Harrington Street is a busy thoroughfare but there were two huge murals depicting early days in the area, in stark black and white. Views of them are marred by the line of motorbikes in front of them. I felt it was an interesting juxtaposition of old and new.

We wandered along the road and passed a couple of the rare older buildings – Sydney probably has the least original buildings than any place we have visited in Australia. 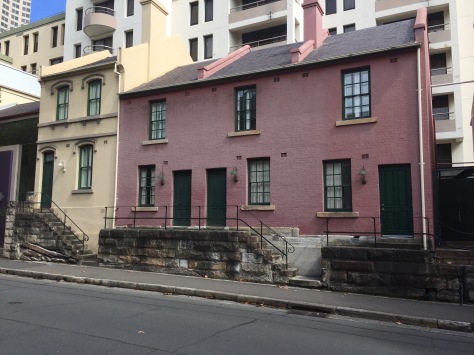 They were surrounded and somewhat overpowered by ‘new Sydney’ rearing up behind them. Just down the road the Rocks Friday food market was well under way – against the background of an enormous cruise liner docked in the harbour.

It was really buzzy. We wandered along the stalls and decided that we would walk over to the opera house to see if there was anything we wanted to go and see and then return to have a snack for lunch.

All sorts of foods were on offer. Tourists milled with office workers who were making the most of the sunshine and daylight in their dash to get their lunch and return to their desks.

We wandered through the harbour crowds, swelled by the people joining the Emerald Princess. They were easily identifiable by their large wheelie cases and slightly anxious air. They need not have worried – there was a long queue forming at the ship – boarding was going to take some time!

We passed the aboriginal musicians on the Quay

And trundled round to the Opera House where we found we had just missed La Traviata and there was no indication of what was going to take its place. We had an alternative view of the cruise liner which more or less eclipsed the bridge behind it……….

Back at the market we joined the longest queue to a food stall on the basis it would provide us with the most tasty street food.  We had made the right decision.  We had a great Gozleme, a Turkish flat bread stuffed with spinach, feta and meat.  It was very good……,,.,

As the time was getting on, we decided to abandon the bridge walk for the day and head back home.  People eat early in Australia and we were due to meet our chums at 6.30.  By this time the weather had taken a very wet turn.  Justine gave us a lift to the bottom of the hill so we did not get too wet and we had a great evening with our chums, getting  up to date on goings on since our last sighting and getting their input on the next Australian trip………!! 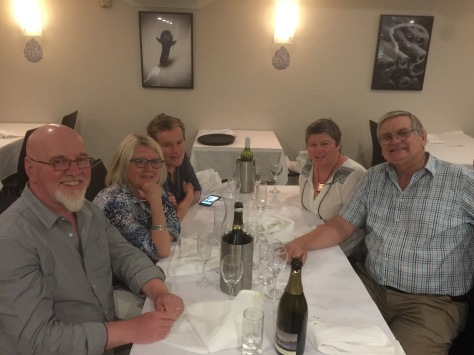 Two bottles of Champagne and a southern Indian meal later and Keith and I clamboured up to the plateau very happy bunnies if a little out of breath!