Our cab arrived at 9.00 to take us back to Ganton to start our last days walking.  The day has started out to be overcast, but by the time we started walking up the street f whitewashed houses in Ganton, the sun was out and the day was already warming up.

We turned off the Main Street and over the stream that runs down the side of the road.  After walking alongside a hedge with the spire of the 14th century Ganton church behind us, we turned up hill along a path that was quite hard work and set the tone for the day really. 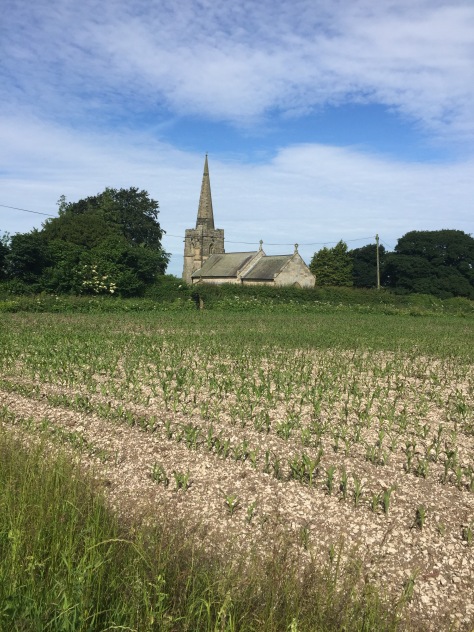 The ground was uneven and covered with grass, with thistles, burdock and nettles waist high on both sides.  We ploughed up the hill and then turned up past a row of gnarled old trees.  As we moved up the avenue a line of cows appeared on the hill top behind it. 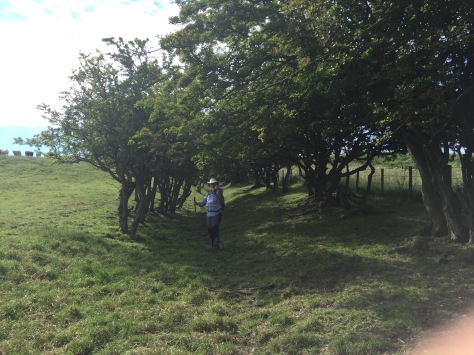 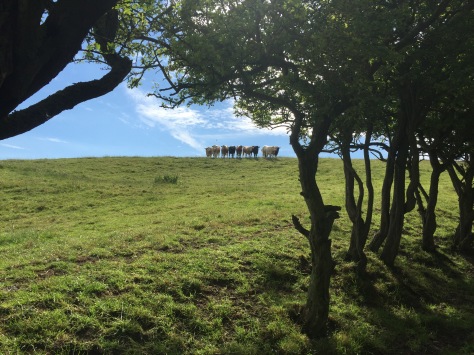 We turned left, right and then left again to reach a road. At each field edge we battled with the undergrowth, trying to find our footing along the path.  We were pleased to cross the road and follow a farm track for just over a mile.  We passed the farm and could hear the grunt of pigs as we passed.  At the end of the road we turned a sharp right passing an RAF station on our left.  The track continued along the perimeter fence with its dire warnings to anyone entering uninvited and RAF Staxton Wold mast.  It all looked very mysterious……

After passing a second pig farm the path deteriorated into a sunken path.  Just as it began to level out we took a left turn up a very steep hill.  It was really steep and slow progress as our feet slipped on the gravelly chalk.  We reached the top and after passing through two kissing gates and came out onto a wide landscape described as ‘wonderful but demanding’ section of the trail.  We ascended and descended the rolling hillsides And then climbed a steep field edge to meet another Tarmac road.  As we walked along I got my first glimpse of Flamborough Head to the left.  To the right was the rolling landscape we had just left behind. 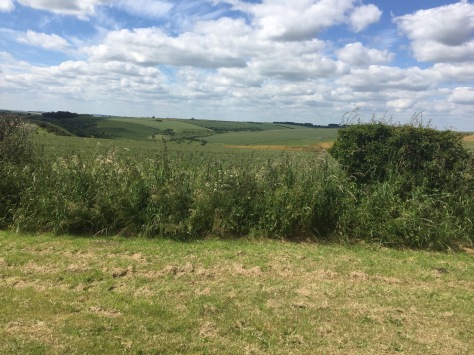 When we turned off the road about 350 yards further on we began the most difficult part of the whole walk.  The path had not been cleared so we struggled with the terrain, but after a big deep down slope and rise we then started on a big dog leg around the top of a hill with the slope of the hill constantly with one foot hitting the ground lower than the other.  It was very uncomfortable. Then to add to our discomfort a way sign appeared telling us we still had seven miles to go when we reckoned we had already done 7 and probably had just five miles outstanding. It was pretty discouraging. 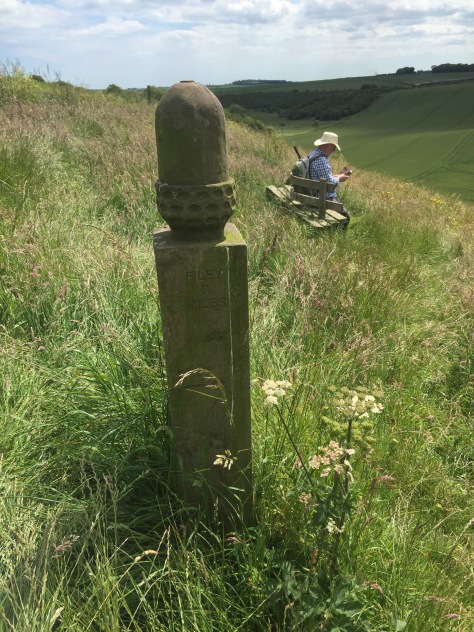 However, we kept going. Our route took us around the other side of the hill and we descended into trees.  We then walked along the valley under trees.  Eventually we came out onto the road.  It was such a relief but we went ahead on a field edge and more poppies! 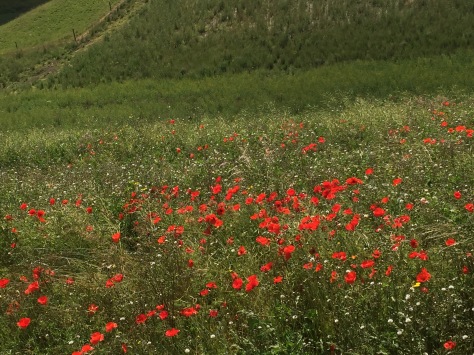 At last we reached Muston and a sign that said 2.5 miles to Filey.  This did not tally with the previous signpost but seemed much more in keeping with our own measurement of time and distance.   We were both very thirsty and Muston was said to have a pub.  Alas for the second time the promised drink was to elude us – the pub did not open on Mondays!  We both felt pretty depleted.

We took a a left turn just short of the end of the village and then set off over a couple of fields and eventually came out by the playing fields of one of the Filey schools. We were nearly there!  Emerging on to the road we got caught up with the young people coming out of school (at 2.30?!).  It was as though we had been caught in a movement of a pack of wildebeasts! There were large packs of long legged young men and women travelling at their own pace and occasionally crashing together in a flurry and nudging of school bags (what happened to the satchel?), shoulders and legs……. We felt very old and out of step!

We crossed the road as soon as possible and, having crossed the railway line, headed to the micro brewery we knew was on one of the main streets to the seafront. Closed on Mondays.  The despondency was increasing!  Having made do with liquid intake at the rather lacklustre Star we moved down towards the seafront and luckily found the steps that led up to the cliff top and our final objective – Filey Brigg.  After several flights of concrete steps up through the trees we came out onto the grassy headland.  The sun shone, dogs careered around and mobile homes were lined up to take the bracing air and make the most of the weather. 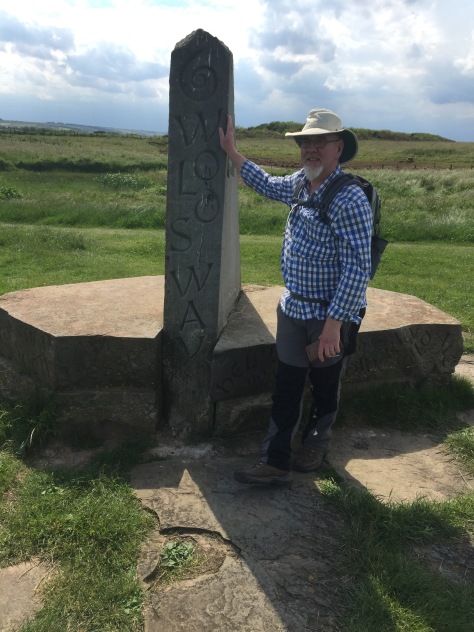 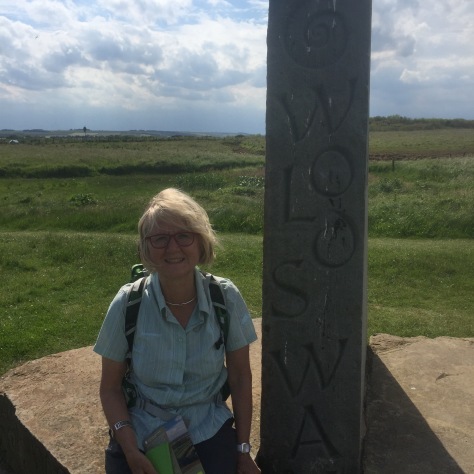 We arrived at the marker that denotes the end of the Cleveland Way completed at this point only a few weeks ago and the Yorkshire Wolds Way.  Photographs were taken to mark the completion of another long walk and we adjourned to the seafront to celebrate. 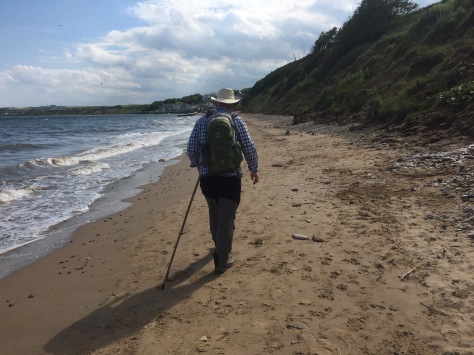 Keith with a pot of cockles and me with a caramel fudge ice cream. Perfect!

6 thoughts on “Ganton to Filey Brigg”