We left the Cross Keys and Thixendale, a really lovely village community, behind us and were taken back to Winteringham to start the day where we left off.  We said goodbye to Mary and thanked her for her many kindnesses and set off by the church.  Initially we took the field edge and then entered a wood and were confronted,  after a sharp right turn, with an extremely steep hill. The guidebook described it as ‘thankfully short’ but this was no real comfort as I slowly moved up the slope.  I think nothing described it better than the Wolds Way sign when I (eventually!) reached the top! 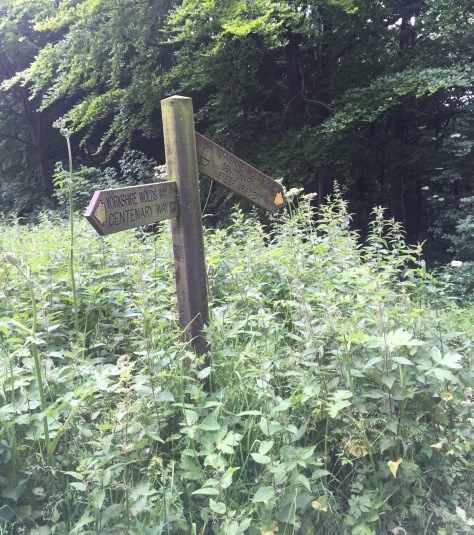 Having reached the top and entering a field through a red gate, we were at a spot I have visited previously.  It is another of the art installation of the ‘Wander – Art on the Wolds Way’.  It is called Enclosure Rites and it was a  lovely day on which to see it. The sun was out.  The Vale of Pickering stretched out in the distance………

I particularly love the gathering of people – pilgrims?

Turning back along the trail we were heading east – we have turned towards the sea having headed north more or less since we left the Humber Bridge.  I heard my first seagulls! Once again it was an ancient path lined with a gnarled old hawthorn hedge initially.  We then entered woods and walked amongst the trees for some time.  Emerging from the trees we contained on the same tack, turning up the field to pass around another wooded plantation.  Looking down from our ridge we could see East Hetherington village and the main road that was running parallel to us below.

After passing  Manor Wold Farm and the road that was just beyond it, we continued along the path, often pushing our way through grass and nettles waist high.  It was quite hard going!  Keith had set his heart on a roast lunch at the Greyhound pub in Ganton where we were heading, so we were maintaining quite a pace. After several more ups and downs we came to a Tarmac road which we took for about a mile and a half before taking a left turn just north of the village of Sherborne.  At the end of this path we turned right on another quite busy road before turning off this at a left fork.  Another very steep hill but quite short lived before we turned off along a field edge and then entered a small wood.  Emerging from this we followed another field edge and eventually emerged on to a sandy lane on the edge of Ganton Golf Course, which amazingly has world class status!  Championship golf is played here and apparently a number of the top professional golfers practice on the course. Not many people know this!!  I have to say it looked slightly odd as there seem to be a pea field in the middle of it!

Skirting the golf course we turned left again.  Ganton could now be seen ahead.  Keith’s roast beef was about a mile away!

We passed another farm and then reached a road to turn down into Ganton, just glimpsing Ganton Hall through the trees to our left. 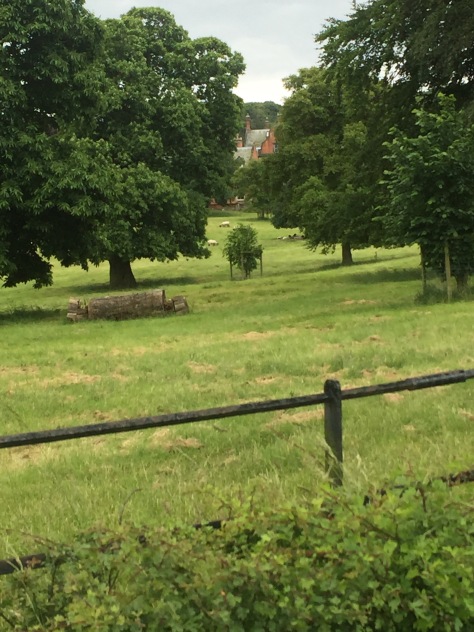 Ganton Hall is a large 19th century mansion and the seat of the Legard baronetcy, which dates back to 1660.
Reaching the main road we found the Greyhound Inn with a table for two hungry walkers. Great!