We were up with the lark, leaving the house with Justine at 6.20 am as we were off to the Blue Mountains for a couple of days and wanted to get there in time to get some good walking in. We just took our rucksacks and were dressed ready to walk, so looked a little out of place on the commuters L90 bus. This Is a much speedier bus than our 180 from the Collaroy Plateau but involves the challenging clamber up and down the hill, which is something of a deterrent. Justine takes the car for the hill climb – sensible girl!

The bus took us right to the central station in Sydney. Tickets purchased, we bought some breakfast and headed for the slow train to the Blue Mountains. Trains here have an upstairs, so for the novelty value we took to the stairs and settled down for the hour and a half’s journey out of the City. As we started to head to the suburbs, we found a different style of living altogether away from the beaches and balconies of the coastal areas.  It provided a useful balance to counter the exotic lifestyles we have been observing in the Sydney areas we have been exposed to thus far here, lovely though they are.  It is certainly not the lot of the majority of Australians to live in architecturally designed splendour overlooking the sea.

As we left the City and its commuter and out of town commercial areas behind, the train starting stopping more frequently at little Victorian country stations, where station masters still blew a whistle and waved a flag to tell the train driver that it was safe to proceed. The journey had the feel of past times in the UK – a Lego land of train sets and Thomas the Tank Engines …..It was absolutely charming and seemed light years more than a few miles from the business of Sydney.

As instructed by the people with whom we were staying, we called them a couple of stops before Leura where we were to get out. As we climbed the steps from the station, as promised, a red Lexus drew up, the very nice man introduced himself, took our bags and pointed us towards the best coffee shop in town and on to the start of the mountain walks. And he was gone! We were left a little dazed but headed off as directed. Coffee stop over we started off down a road lined with trees in blossom of varying shades of dark pink through to white. It was a sight to behold. Equally springlike were the rhododendron shrubs and azaleas in the gardens along the way. Sadly the camellias had obviously been bruised by the weekend’s rain, but this aside,, everything was set for a beautiful spring scene – to be admired and remembered as this time next week we will be heads down for winter at home. 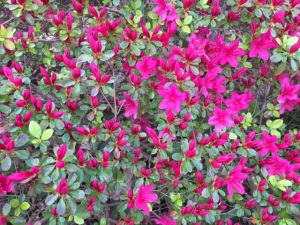 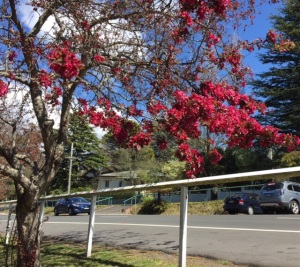 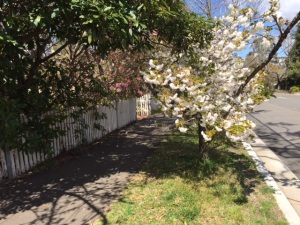 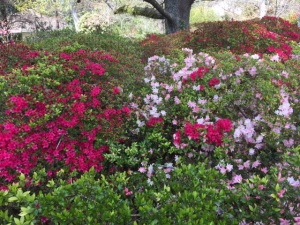 True to the instructions, we came to a t-junction at the end of the road and a map of the cliff top paths that gave access to the blue tinged mountain views that we had heard and read about. Not totally certain where we were heading we descended steep steps on the path signposted Gordon Falls and within a very few minutes we were confronted with the most incredible view. We were looking out over the forest below and out towards a blue mountain horizon. It was magnificent. To our left a small waterfall sent water several hundred feet down to disappear into the woodland below. Our first taste of the maze of paths that meander the cliff side of the Blue Mountain National Park. 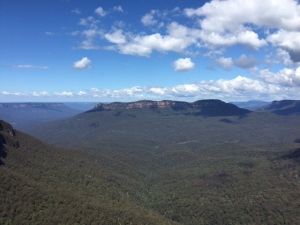 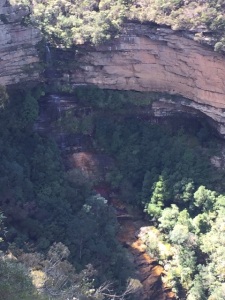 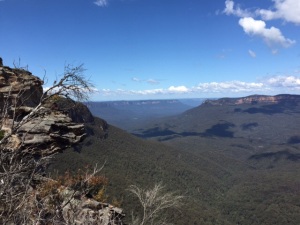 Our meanderings along these pathways took us through locations exotically named the Elysian Rock, Fernery Cave, Bridal Veil View – this one bringing us right out to the end of a precipice over looking the end point of the Leura Cascades across the valley. I was heartily pleased that a handrail had been added to the steep steps that took you down to this point. Bouncing was an unlikely option if you missed your footing! Below us Sulphur Crested Cockatoos swooped, dipped and turned, screeching to each other and disappearing out of sight into the distance. Incredible! From this slightly nerve racking viewpoint we retraced our steps and took another path which took us round eventually to the Leura Cascades themselves, a broad rocky waterfall. 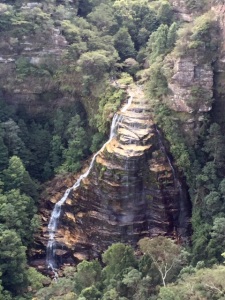 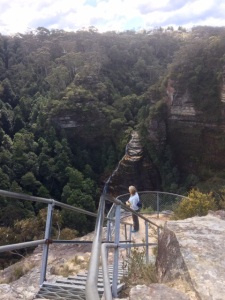 We had seen few people as we had walked, but at the Cascades a number of people had gathered as the path came very close to the road that travels along the cliff top. At the point the Cascades become a waterfall there was a lookout tat enabled us to see as a small speck in the distance the Bridal Veil lookout point where we had been half an hour before! It looked even more precarious looking back. 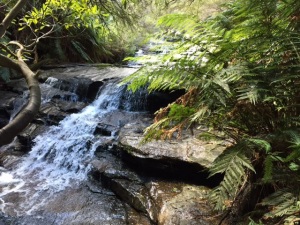 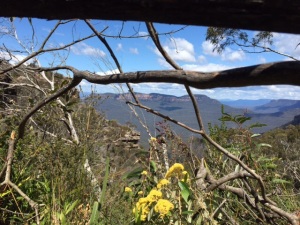 We travelled on. The path that drops away steeply to the left as the cliff descends into the valley below was variously a stoney walkway intersected by large tree roots, rocky steps (either natural or man made), steep wooden stairways or rock walkways. Trees met over head and vast rocky overhangs jutted out to give a nasty headache to the unwary. The path went up and down and turned this way and that as it followed the contours of the cliff face. Not for the faint hearts but absolutely great walking. Birds called.  Small flowers appeared to grow out of the rock.  Lizards rustled by in the tree debris beneath our feet. 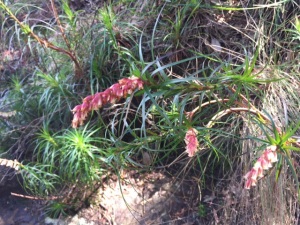 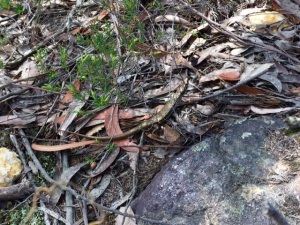 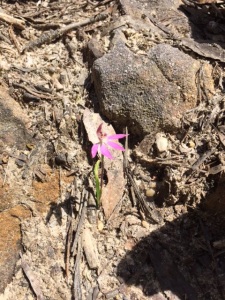 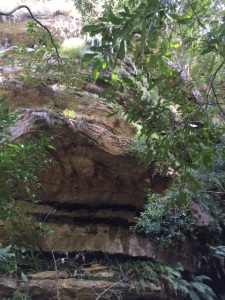 We eventually reached the top of the cliff and took a short cut through to the town and checked into our accommodation having been reunited with our bags.  Then it was back up to centre ville to have lunch at the cafe where we had the coffee stop earlier in the day and a little wander around some beautiful shops. It was a lovely spot.

We had supper at a restaurant called Silks at the top of the town and very good it was too.

All in in all another excellent day!