We were off again! This time it was to start the trip that would incorporate a visit to Peter King, another of our Silk Road friends some way north west of Sydney.

It was yet another beautiful morning. Our sunny accommodation glowed gold with the sun pouring in. There was much gathering of equipment and Keith and I put the new bag together as our travelling luggage again. First stop was to be the Hunter Valley, the wine making region,  after we had stopped for supplies in the local shopping area. Supplies obtained we set off for the Hunter Valley.

It took quite a long time to get out of Sydney and its suburbs, which spread in an ever increasing span from the harbour. It is amazing to me how much the city has grown in less than two hundred years when you think how long London has been in existence! The other fascination is that every house is different. We saw no street of similar housing or the equivalent of the English ‘estate’ of housing by the same architect. The creativity in terms of design is remarkable. A number of the less exotic homes are in a sort of bungalow, single story style. However there is nothing of the home for the elderly about them which tends to be the English association with the bungalow.

Issues of architecture aside, we eventually left the housing and commercial buildings and we were out in the countryside again. We were back on the single laned highway, similar to that we had experience on our progress from Adelaide to Melbourne and Melbourne to Sydney.

a feature of the route to the Hinter Valley were the goods trains passing us carrying coal on the railway track running by the side of the road.  They seemed never ending   There are no nuclear power stations in Australia and surprisingly no solar panels  just coal powered electricity and miles and miles of coal trucks……..

Our first stop was for lunch. We had already passed a number of vineyards and passed rows of immaculate vines – scenes last seen in the Adelaide hills. Enzo’s the place we had been recommended for lunch had a cellar adjacent to it. Handy that! We set off for a wine tasting prior to lunch. This was surprisingly disappointing. The wines were very young and quite lacklustre. We tried white, rose and red. Nothing proved striking. All were very young. Keith and I began to realise that our northern palates looked for something more robust in terms of taste.  The lunch stop had some lovely flowers though! 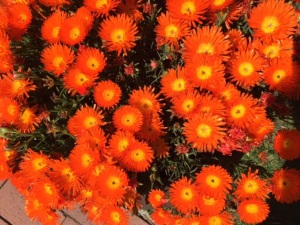 We tried a couple of further wine houses through the afternoon. I passed on one or two but nothing compared to the wines we had tasted further south or those at home.

Eventually wined out, we arrived at the Cypress Lakes Resort an accommodation and golf complex right in the middle of the Hunter vineyards. It was ideal. We had a three bed roomed house complete with pseudo fire place with gas fire. We piled out of the wonderful people carrier with all the kit that Wendy and Sarah had put together ( they are amazing people to travel with) in addition to our shopping. We had anticipated buying wine from one or two of our tasting houses but this had not materialised, so we were lucky to have the supplies that had been put in ‘just in case’!

We had a jolly evening. Sarah and Keith cooked and we had a delicious variety of dishes. It was then off to bed. We had a serious wine tasting day ahead. A full day tasting tour!!

One thought on “Wednesday 9th September”