Another lovely day. Are they all like this in Australia I asked myself? It was a lazy start as our tasting tour guide was not due to arrive until 10.00. Sure enough, just before 10.00, ‘Roy’ drove up the hill to pick us up. There were already two young people on the minibus, Jess and Matt who proved to be knowledgable young companions for the day. The seven of us made up the touring party.

Our first stop was Mount View, where a young lady called Sarah encouraged us to sample the vineyard’s wine. I have to say my favourite taste of that on offer was the wasabi cheese which was excellent. The wines did not do a great deal for me, although to be fair they were much better than those experienced in the area previously! Roy was obviously well known to the vineyard owners and took us on a brief tour of the ‘behind the scenes’ wine making process. We saw shiny vats and new French barrels. I always feel this aspect of the wine making process makes one much more respectful of what it takes to produce a good glass of wine…….the vineyard itself was quite small and sold nothing to stores or retail outlets, relying solely on customers visiting the vineyard for its sales.

Our next sampling was done at the Ernest Hill vineyard. Here an older gentleman called Neville charmingly took us through the wines on offer. I found one of these much more to my taste and we learnt more about the taxing of wines which explained some of the issues about the reason the wines we were being offered in the Hunter Valley were so young.  To our taste they had reached no where near the maturity of wines available in England, France or Italy that we are used to.

Our next stop was for lunch at Emersons. Several of us opted for the prawn option which was better in the description than the reality! The wine offered was equally nothing to write home about. However we visited the delicatessen attached to the restaurant. They sold a number of prizewinning olive oils and dips and Keith bought some verjuice to his liking. It was then all aboard the bus for our next venue which was the champagne (equivalent) house, Petersons. Here a very sharp salesman took us through their range including a sparkling Pinot Noir which I though might have promise – I quite like a sparkling red – but sadly it did not match up to expectations. I did however purchase a pink diamanté trimmed ‘stubby’ for my personal use!

Bubbles were purchased for later in our journey and we were off to the Tulloch vineyard. This was by far the largest and most commercial vineyard we were to experience and it felt like it to a great extent. There was a much more prestigious party due to arrive and they were certainly taking precedence.

Leaving Tullochs we left wine for a bit and moved on the The Two Fat Blokes, which I understand to be something of a misnomer given that one fat bloke has sold his share and the other is no longer fat, merely a bit chubby! Here we tasted a number of local cheeses. They were ok but not exceptional. However, they did own a delicatessen what provided access to a good jar of humous which we purchased having no ‘whizzer’ with us to make our own!

Food buying over we struck off to our final vineyard. Gun Dog Vineyard. Here some brightly coloured plastic dogs made a rather startling appearance – in bright red and blue. Quite bizarre! However the wine proved to be some of the best of the day, so our tour closed on a high and with us all feeling very jolly, if a little jaded……. 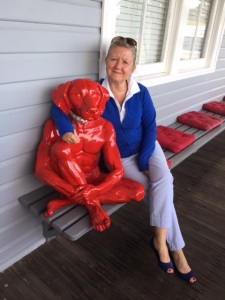 It was then home with the various bottles (a surprising number!) that Roy handed over as the purchases we had accumulated, as we disembarked. Our post mortem revealed that we had all had a good day and that our view of the hunter wine region had exceeded expectations.

The brief evening was a little quiet and the house was in darkness by 9.00 pm.