We were up with the lark or perhaps it is the Noisy Miners here. George and Helen, friends we have stayed with frequently in Europe are looking for a new home in Melbourne and came to go out to breakfast and then go to see the house they are thinking of buying.   They are currently renting in the Fitzroy area so are not far away.

Breakfast over we strolled in the sunshine to their potential new home.   We had no arrangements to go in,  but Helen was keen to see whether it’s patio area would catch the winter sun.  We were able to see it from a number of angles, but it was difficult to identify exactly how much sun would be seen and when.  Having exhausted our speculation they came back to the apartment for some reviving water and for Helen to get a sighting of The Opal ring which I have not mentioned nor seen for some time myself.   It is beautiful!!

While we were discussing the house and it’s features, the estate agent rang to say that as a special concession she would be willing to let them visit the house again while the sun was shining (I think she is sweet on George!).  So Helen Keith and I went off to meet her.  I think George was sorely missed but he had a car registration issue to attend to.

The house was very modern, with a great deal of exposed concrete.  I think the architect had experienced real enjoyment in designing it –  it really optimised the light and space and had two courtyards opening out from rooms that would be fun in the summer  it also had a fireplace.  There were several bedrooms and the whole thing was beautifully presented, The sun poured into the house and to some extent onto the upper courtyard – I guess it would do it more in the summer.  It had a lot of charm.  it is to be sold by auction at the weekend, so even if they want it there is a chance they will be outbid  I would find that very difficult if it was something I had really set my heart on.  I guess it is in the hands of the gods

At this point we left Helen, having arranged to meet at the MCG on Thursday so that Keith and George can tour the cricket ground and Helen and I can go off to do girlie things .  We booked ourselves a table for dinner at Richmond Oysters said to be one of the best sea food restaurants in Melbourne on the way  (again Fanthorpe recommended!)  and toddled home for a break before our afternoon outing to the Botanical Gardens.

The sun shone as we set out across the river to the Gardens. They were lovely – as was the bride who it seemed had just got married there.    We came across the men just putting away the bridal arch and silver chairs that had obviously transformed the Melbourne botanical gardens on  a Tuesday afternoon into a wedding location.  Elsewhere a party of Japanese ladies kept disappearing into the undergrowth as they got up close and personal with the shrubs to have their photos taken.  It takes all sorts – I was fascinated as they emerged with nits of leave and sticks attached!

We had our usual effect on the hot house plants in that the greenhouse had closed two minutes before we got there, ditto the cafe, but we loved the new fern grotto  the light was just extraordinary. The stag ferns though we’re not a patch on those we had seen in Jenny and Ross’s garden

Being Spring the camellias were out and other exotic Spring flowers.  A treat of an afternoon stroll. 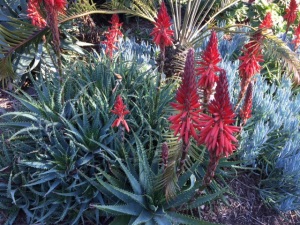 Our meal at Richnond Oysters was equally successful.  It was really busy and we were fascinated by people eating huge platters of sea food and following it up with paella!  Amazing!  We had a drink to Curly’s Perch which was being inaugurated at the same time in Tollesbury and hoping that the rain held off for the celebration.  We were sorry not to be there.

Our final excitement of the day was a telephone call to Justine and booking Coco and Micky to take us to the zoo in Sydney before they fly off to Adelaide to spend their holiday with Jenny and Ross which will be popular with all concerned.. Coco has a birthday before they go that will be fun not to say a little raucous no doubt!

3 thoughts on “Tuesday, 1st September – the first day of Spring in Australia.”