7.30 saw us en route to the start of the Kings Canyon Rim walk. Sarah had decided the walk was not for her and that she would stay back and do some shorter walks when it got light. Sensible girl! Keith, Wendy and I set off. We were more or less the first in the car park, although there was a group being briefed we noticed in the gloom as we passed by the information board. We were certainly the first to start the ascent.

A steep start we had been told……… It proved to be only one step down from rock climbing requiring string!! The ‘path’ was a clamber up the only slightly off the vertical rock face! It was starting to get light fortunately so we could vaguely see where we were climbing. At points the next step was about waist high – a bit daunting to someone somewhat challenged in the leg length department!!! Nevertheless it was onward and upward and in an amazingly short space of time we were looking down over the plain at the bottom of the valley. Our route took us up and up until we eventually arrived at a rock strewn plateau at the top.

Somewhat breathless (!) we peered back down and along the rocky outcrop we had seen the sun set upon the previous evening, just in time to see a sliver of sunlight pierce its upper edge. Perfect timing!

The well flagged path initially took us along a fairly flat but rock strewn pavement, occasionally intercepted by vast fissures in the rock bed where palm trees and rock plants were flourishing. There were in fact an amazing number of trees up there, rooted in nothing more than sandy rubble, but hanging on tenaciously to life. There was even one of the amazing ghost gum trees that apparently take hundreds of years to grow. It was looking quite smart with a sort of. jumper arrangement on – we were not sure whether this was for warmth or to protect it from people scratching their name on its ancient bark, as one couple had done. 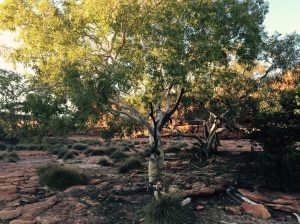 Our route twisted and turned, sometimes taking us to the rock face for another glimpse of the valley stretching out to the horizon below us, sometimes taking us through curtains of rock. At one point we crossed a ravine by a wooden bridge, below us was the lush vegetation of the tropical rain forest. Later we came across slabs of rock underfoot with ripples on their surface, apparently evidence of the water that had flowed over them in times long past – there was even a poem inspired by the ripples and recorded on an information board nearby.

It was a lovely walk with beautiful views but providing some hairier moments. Once or twice we were reduced to bottom shuffling to get over difficult terrain! I describe all this to enable you to share our awe and respect when a chap came jogging by – very reminiscent of the fell runners of the Lake District. Is it just old age that brings with it the worry about the potential for sprained ankles and broken legs and the lack of telephone reception?!

We passed through a gate of apparently no return, presumably there to prevent people walking the wrong way round the rim. Once passed this we looked over a significant ravine with a sheer cliff face on the opposite side that looked as though someone had taken a cheese wire to it, it was so smooth. Silhouetted on the opposite cliff top were the party we had seen at the information board when we had started out, looking like Lowry”s matchstick men in the distance!

After this the route started to descend. Eventually the car park came into view, now bristling with vehicles but at this distance even the large tourist buses looked like specks on the landscape. However, before long we had reached ground level. It had taken 2 hours 45 minutes to cover just 6 kilometres ( the recommended time is 3.5 hours). We had done well.

We found Sarah who had had a good wander on the lower levels of the Canyon and after a short pit stop we started out on the four hour journey back to Alice Springs. I drove the first leg.  It is amazingly easy driving but the occasional upturned husk of a vehicle by the side of the road is a testament to how easy it would be to just fall asleep or be mesmerised by the shimmering pathway ahead of you.

We arrived back in Alice Springs and headed straight off to the local Woolworths (apparently no relation to our defunct store) to get supplies for supper and replenish our wine and. beer stocks. We then headed back to Helen’s place. Beers were definitely in order when we got back.
Sarah and Keith set to to make a wonderful vegetarian mezze which we all fell upon with relish!
Yummee!!

After more or less constant early morning rises since we arrived in Australia we all agreed on a lie in on the morrow – great stuff!