We were up at 5.45 and left the accommodarion at 6.30. It was just light as Wendy drove Keith and I to the Mala car park to start our walk around the base of Uluru. The yellow glow on the horizon gave us the wonderful silhouettes of the trees and bushes as we passed that we have become used to during our early morning risings. Wendy dropped us off  – the girls were to join us later for a guided waterfall from the same spot. The car park was empty, no-one had arrived to climb the mountain.   All was silent and still.  We had the place to ourselves. It was magical. The rising sun made long shadows as we set off. The mountain stood in dark shadow and loomed high above us

I found no difficulty at all in walking the route for a second time – I saw different things, and it was lovely to do the route with Keith. It is an extraordinary place.  We loitered over trees and rock formations and Keith had a happy interlude communicating with a bird who responded happily to his mimicry.  The extent of the bushes around the mountain’s base ebbed and flowed, obviously dependent on the amount of water that could be reached

There seemed fewer people even when the time had moved on and the day had heated up,  so we had a really lovely meander   We chatted and were silent , just happy in each other’s company in the presence of the mountain 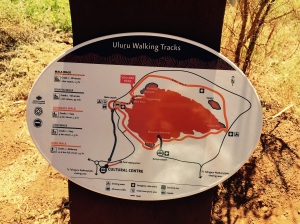 At 10.00 am we were back at the car park with the large group who had gathered to do the guided tour.  I was concerned that we would not be able to hear all that was said, but my concerns proved unfounded.

The guide had aboriginal ancestry and talked fondly of his grandparents who had lived in the old ways and instilled in him a need to learn more about his ancestry.  He told us of the creation stories of the aboriginal culture and how Uluru plays an important part.  The aboriginal culture is thought to be the oldest in the world with evidence going back 35,000 years. It seems to have been a society of clearly defined roles – the men hunting and teaching the young men and the women foraging for ‘bush tucker’ with their digging sticks, raising the children and teaching the girls.  At first glance there seems little evidence of food in the area but there are seeds that can be ground to make flour, bush plums that grow whenever it rains rather than on an annual seasonal basis and desert figs, as well as the game brought down by the men. The boys were separated from the women’s area at 12 and then went to live with the men when, by means of stories, drawings and dance,  they were taught morale codes and responsibilities.  We saw evidence of their drawings – age unknown

We were  shown a ‘Piti’, a shallow dish made of tree bark which the women used to carry their foraged food.  This they would carry on their head on a bun shaped pad made out of human hair. The aborigines have foraged and cooked food in the same way since the beginning of time. These tales of a principled and proud people seem a long way from the troubled relationship between them and the white population of Australia that we have heard about from everyone we have met here. Equally frequently,  we have heard people say that there seems no solution to the aboriginal ‘problem’  despite the initiatives that have been made to resolve the situation.

Our guide also told us about the geological history of the Uluru mountain itself.  It stands in what was once an inland sea and was the result of a tremendous earthquake.  Further earthquakes after the initial upheaval turned the rock 90 degrees to its current position   It now stands 398 metres high and iits base is buried several kilometres deep into the earth. The ‘red’ colour of the rock is caused by the oxidisation of water running over it

We ended the walk at the base of what is a very large waterfall.  When it rains the water cascades down into a hollowed out pool at the mountain’s base

Our brief insight into the mountain complete, we adjourned to the cultural centre for an early lunch prior to wetting off to Kings Canyon

We arrived late afternoon and in time to watch the sun go down on the Canyon from the ubiquitous platform strategically placed for this purpose..

It was an awesome sight – particularly as we had been warned the  climb to get up to the ‘rim’ was somewhat challenging.  Ann from the cattle station had said we must not ‘shirk it’ as there were great rewards for sticking with it. it was against  this background that we took advice from a member of the resort staff in terms of timing and our onward journey to Glen Helen planned for the next day. . As usual the advice was to walk early (another dawn walk in prospect!) leaving no later than 6.30  am. We also asked about the route to Glan Helen, the next place on our itinerary   We knew that this was reached by a dirt road.  However  on enquiry we were advised that the dirt road was deeply rutted and was likely to be dangerous, so after a brief board meeting we decided that we would return to Alice Springs directly by via the highway and miss Glen Helen on this trip.  Although disappointing, it would provide an opportunity that we would not otherwise have of visiting the town of Alice Springs

One thought on “Monday 17th August”