We woke up to more rain, but Keith did the morning dog walk with Peter. After breakfast we took off for a look around the area. It was Redhead Point near Swansea where we saw whales in the grey water. Keith had the binoculars and said he could see several. I could just make out the occasional spouting, but somehow a whale sighting is always exciting.

We had hoped to go for a walk but it was too inclement, so we took off for Newcastle where the ships we had seen waiting in the ‘roads’ off Swansea, were waiting to berth and be filled up with coal. Newcastle is the main coal port of Australia and is reckoned to be the largest port exporting coal in the Southern Hemisphere. Most of the coal goes to China.

We had lunch looking over the entrance to the port. 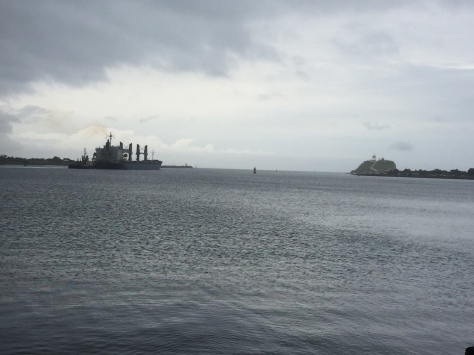 As it was still raining hard, we adjourned to the house and had the indulgence of an afternoon snooze – a real excitement on this action packed trip.

Much revived we decided to have a television supper and settled down to a Julia Roberts evening courtesy of Netflix. The Pelican Brief followed by the ever lovable Notting Hill.

One thought on “Thursday, 4th October”