(you see, the Durack have even got a range named after them!) en route to the remote outback town of Warnum, commonly known as Turkey Creek. Shortly after setting off we arrived at our first stop, the hot water Zebedee Springs. These are still part of the vast acreage that is the El Questro set up. It was amusing to note that the public is allowed to use the springs up until 12 noon. After that they are for the dedicated use of the El Questro Homestead guests…… 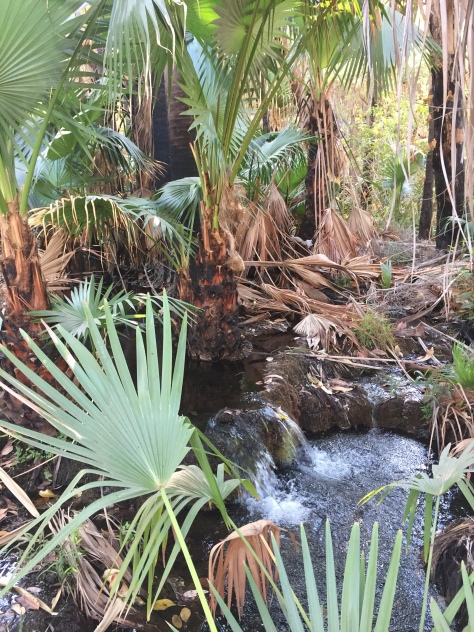 One’s first impression of the area was the lush vegetation. It was truly tropical rain forest. The area’s water is fed from a fault line in the earth’s crust and provides a permanent supply of warm water to the springs from deep within the earth. The water temperature is constantly 28 – 32 degrees all the year round. The surrounding cliff faces and scree slopes are thought to be up to1800 million years old…apparently scientists have recently identified an ancient aquatic isopod crustacean (a white crab like creature to you and me) in the water which is only found here.

Our water babies immediately stripped off and wallowed in the warm water. Dedicated readers will be pleased to hear that I spent my time updating my diary……

After an hour at the hot springs we were back on the truck for the short drive to Emma Gorge. The walk started from another resort owned by the El Questro people – we still haven’t left their land! After topping up our water at a tap in a Boab tree (not really Boab water!), 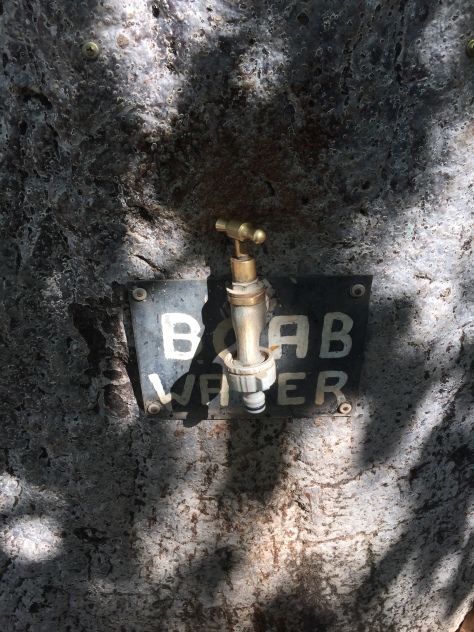 we started our hike up to the turquoise pool which lies at the bottom of the waterfall in Emma Gorge. I think I would describe my effort as quite lacklustre. I think I am perhaps getting cumulatively tired despite my early nights! Maybe I have to accept that I am getting old. Whatever it was, I made a bit of a fist of it! After an initial period on a sandy path, the rocks started. 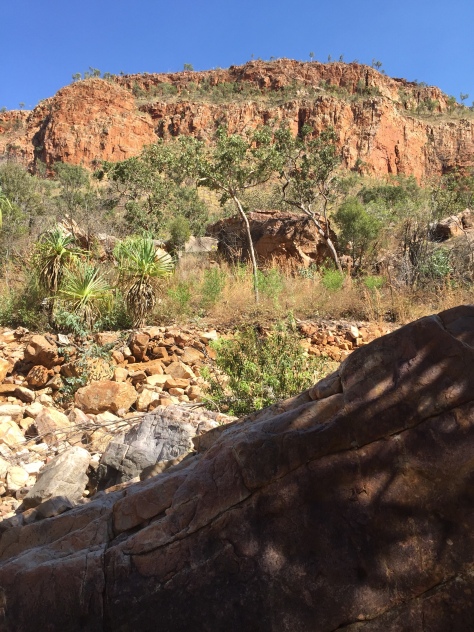 We crossed and recrossed the trickling water. The day was quite warm, although still early. Quite soon I was lagging behind – not least because the scenery was beautiful and I was taking photographs. I was conscious that the voices of the rest of the party were disappearing into the distance, so I picked up speed, tripped over a boulder and fell down on the rock. I picked myself up and dusted myself down and in my effort to catch up, missed the turning and lost the blue spots denoting the route.

Hmmmm thinks I. Not very clever. In the event I decided to sit tight in the optImistic hope that I might be missed. So I sat on a rock and watched the water meandering around the rocks at my feet, tum tee-tumming, and sure enough my knight in shining armour came back to find me. I was very pleased to see Keith’s face peering down at me😎! I was only a few feet from the path but had missed a very large sign turning right and I had turned left! Jodie had also returned to find out what had happened to this errant member of her flock!

Feeling somewhat embarrassed and woefully inadequate I was escorted up to the Turqoise Pool which wasn’t, in fairness, too far off. The others of course by this time shimmied up the side of the waterfall to the top. I was just happy to have made it to the Turqoise Pool and not be lost in the undergrowth. 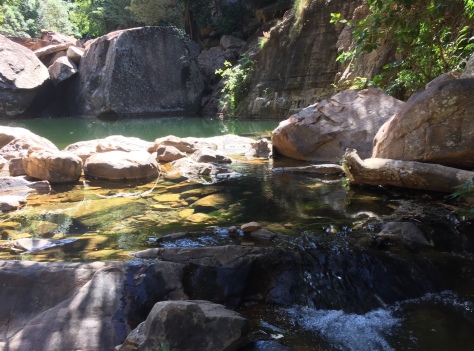 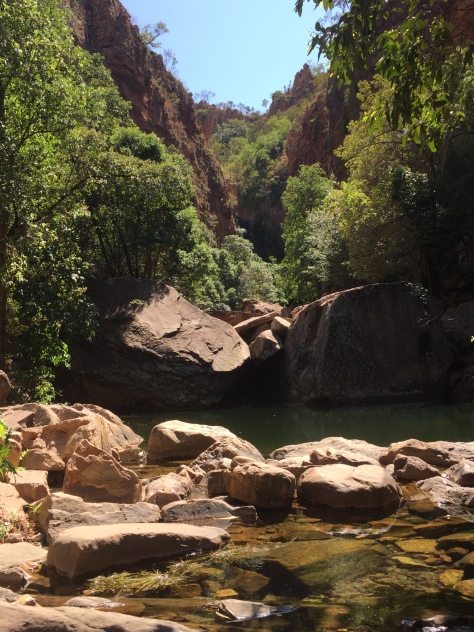 In actual fact, the turquoise was something of a misnomer – apparently there was not enough water from the waterfall to give it the colour for which it is known. Having decided I had had enough excitement for the day, I just sat at the pool side for a bit before retracing my steps back. No harm done, just a bit of injured pride that I had been so foolish and a banged knee, the like of which had not been seen since my playground days…….

After a reviving drink at the resort bar – it was still only 10.30 so it was a very soft drink – we were back on the road and heading for the Purnululu National Park and the Bungle Bungles. It was along drive but we had great views of the huge ranges of mountains as we travelled along. We stopped off briefly at Warnum, or Turkey Creek as it is commonly known.

Post lunch we set out on the challenging terrain of Springs Creek Road, definitely requiring a 4 x 4 status vehicle. We lurched and swung along the windy road. The truck bucked and rolled. We had tied everything down before we set out, but nevertheless things started to roll about and fall off shelves in the back cabin. We saw further smoke in the distant hills. The fire we had sighted the day before was still going. Photos taken through the truck window……

After about an hour and a half of this, we turned into our camp site, described as having ‘basic facilities’. We were parked amongst trees. There was a surprisingly non smelling drop loo in a tin hut and nothing else. We were quite used to sleeping under the stars by now but it was the first time we had absolutely no other amenities on this trip. Back to the wipes!

We unpacked our bags and the swags but then dashed off to see the sun set over the Bumgle Bungles, the dome like rocks of the area. 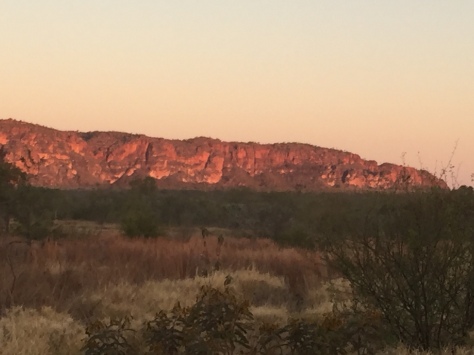 The domes are made of multicoloured sand and limestone with the grey areas the-colour of a bacteria when heated by the sun. Clustered together they look like giant stripey rock beehives. Controversially, I think I liked them better than Uluru (Ayers Rock). We stood and watched the sun go down and after that the reds of sunset turn the rocks to deep reds and purples. It was glorious. When the purples had deepened again and darkness began to fall we headed back to our camp and supper. The food just gets better and better despite the facilities getting less and less. There was no lighting of fires here. As we had entered the Purnululu National Park there had been big signs to this effect. The word was that the fire we had seen from a distance had been started deliberately.

An additional treat for the day was when Tobin, our resident German astronomer talked us through the stars of the Southern Hemisphere which have given us such a wonderful show every night. It was fascinating and the numbers of lightyears involved I found mind bending. What an added bonus! Without the truck lights we have absolutely no light pollution. The night sky was just stunning.