A free day in Broome. Although we had no deadline, we were up by 8 and finding some of the group planning to set off for the Zoo Keepers upmarket restaurant recommended for breakfast, we abandoned our humble toast and made haste to join them.

Apparently Broome used to have a zoo, now abandoned, and the area is covered with rather grand housing where yummy mummies can be found parading the pavement with designer pushchairs. The Zoo Keepers House now hosts the restaurant as its name implies. It was quite a walk, but we arrived there about 9.00 and were well rewarded with muesli and fruit for Keith and smoked salmon mouse, beetroot purée (the Australians seem very fond of beetroot – a trait rear I really approve), Rosti and poached eggs. Washed down with fresh orange juice – it was good and a long way from our camp pre dawn starts to the day!

Having started the day so well, we left the others and headed off to the beach which had been the location of our boat trip the previous day. It was huge and quite empty apart from the occasional sun worshipper. Descending from the walkway, we decided to turn left along the sand towards the lighthouse we had seen before. It did seem a long way off. And so it proved. Crossing the line of jelly fish which, presumably, marked the tide turning,

we strolled happily along looking at the marks in the sand made by anonymous creatures and generally celebrating our good fortune. 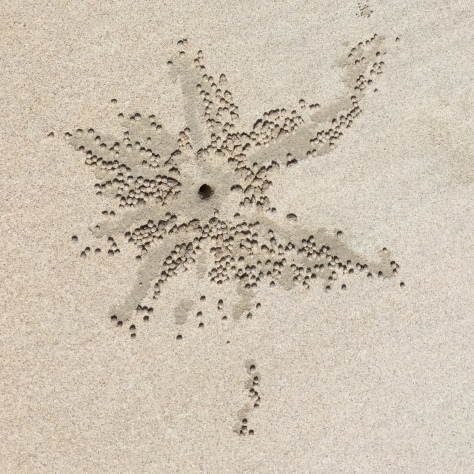 An hour and a half later and somewhat closer to the lighthouse,

but still having not reached it, we decided we needed to turn inland and started to look for places where we could cross the bar of sand dunes to take us back to civilisation. We eventually came to a marker indicating a route over the dunes and set out over the hot sand and scrubby grassed dunes that marked the divide between road and beach. This proved easier said than done. First, because it was hard to get over the rise on the fine sand. It proved to be really hard work. Then when we reached the brow of the dune – we saw nothing but more dunes! Luckily the way marks we had first seen when we turned off the beach, continued up and down the contours of the sandy landscape. We eventually saw that we were coming to the end of the sand and a red coloured track came into view and at last we saw houses. Descending yet another sandy trough we found ourselves on more the red coloured ground and following a clear path we eventually reached the road. The route we had been following was an aboriginal route to the sea.

We now found ourselves confronted by a dual carriageway and the start of the single story houses that make up the everyday urban landscape of the Cable Beach area of Broome and we were at the opposite end of town to where we were staying. Some fancy footwork later we had negotiated a route that enabled Keith to buy a new bag to replace his red one which was beginning to tear (I think it looks like a small coffin and Is certainly big enough to lose me inside!!), find a source of water (our supplies had been fast running out following our lengthy exertions) and eventually a bus to get us back to base.

We calculated that we had walked about 8 miles. Good for Keith’s thousand mile challenge but not necessarily for my equilibrium and it is to be remembered that we did this in over 32 degree heat.

Back at the ranch, it was by now after 3.00 pm, we found that what we hadn’t been told was that our double occupancy accommodation did not cover Wednesday night. 😳 We we’re informed that we could return to it on Thursday night……. Hmmmmmmm.

There was in fact some confusion In the camp about our ongoing plan. Young Brenton had departed on Monday night (although he had joined us the next day in Matso’s for a beer which was nice) and a new factotum was due to join us on Thursday but we did not know where we were staying Thursday night. We had assumed in paying for three nights accommodation we were in our room until departure. Apparently this was not the case. We were to stay at the hostel on Thursday night (hence three days charge) but not on Wednesday. To say that Mr Gregory was not very gruntled was an understatement of some magnitude. 😖😡😤 However, it was not to be changed, so we packed up our belongings and descended to a six person dormitory……for the night. We were offered a free drink at the bar to make amends – we did not take up the offer.

Meanwhile, two of our party had been fishing. And they had caught fish. Loads of it !! So Keith made a Thai coconut curry – an excellent meal for about 10 of our part who were around in the hostel kitchen. It was very yummy!

One thought on “Wednesday 5th September”