After a great nights sleep – it was much warmer – we packed up our room and then the camp. It was time to set off to Broome.

It was a lovely sunny day with a clear blue sky. We set off at a leisurely 8.30 and were soon back on the Great North Coastal Highway and crossing the Great Sandy Desert. Our first stop was 80 Mile Beach.

As you cut through the sand dunes, the ocean, particularly its colour, is an amazing sight. The tide was out and the colour tone moved from sandy white through to an amazing turquoise. Once on the beach itself, it was almost too big to contemplate. It just stretched as far as the eye could see in both directions. Occasionally cars could be seen driving just south of the dunes along the beach itself. The shells were translucent, many with a starfish motif etched on their upper side. 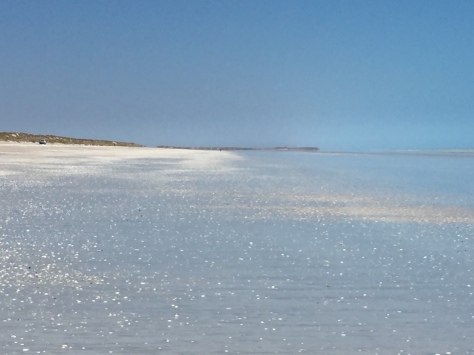 We eventually reached Broome just before 5.00. It had been a long drive.

Along the way we had called at a truck stop, where the collection of caps suspended from the ceiling created something of an optical conundrum….. 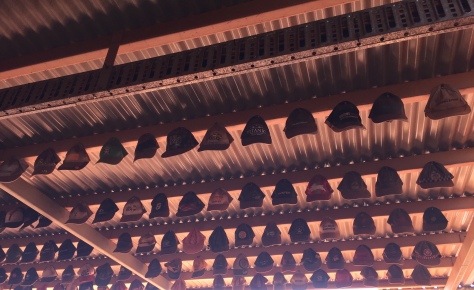 Broome would seem to be a town of separate parts – an area around the beach (Cable Beach), a Chinatown and a suburban area of smart housing. Through the middle runs the airport. It was quite warm when we arrived at the Kimberley Travellers Lodge a busy backpackers paradise. Keith and had opted for an upgrade and wimpiishly relished the thought of a room to ourselves rather than spending the three nights here in a dormitory – as much as we have come to know and love our fellow travellers!!! It was to be our last supper with the enigmatic Brenton (apologies for misspelling his name thus far), our driver, guide and general factotum. I am not sure what I make of him, but he has certainly proved himself with the driving. We have travelled around 2,000 miles since we left Perth.

Broome was established in the 1860’s when the establishment of pearling brought an influx of people from all over the world. It still claims to be the supplier of the best pearls in the world. It is also an important and sacred Aboriginal site. In common with so many places we have visited, the Aboriginals we see (and there are remarkably few) seem aliens in their own land. I find it very difficult to reconcile.

After scrambling to do the washing (of clothes and my person) immediately after we arrived (absolutely everything is covered in red dust and I have not been so dirty for a long time) we gathered with the rest for our really last supper with the group as it was then configured. I bought some bubbles to share to celebrate kicking off my birthday celebrations and we had some surprisingly good pizzas brought in. A jolly time was had by all. I have to confess having to raid a shirt hidden in the recesses of my luggage for the bright lights of Sydney, which was rather nattily (I thought) teamed with the pyjama bottoms that I haven’t yet worn as literally everything else had gone into the gaping mouth of the washing machine!!

I adjourned early in my inimitable style and then had to resurrect myself as they had all signed a card to acknowledge my celebrations. I was very touched and also very thankful I had not reached the final stages of going to bed…….. they are very sweet

One thought on “Monday 3rd September”