I woke up early. The advice given to us when we arrived at the hotel was to have breakfast there. So at 7.00 we ascended to the sunny 10th floor where a man with a somewhat Dickensian look, who painfully appeared to desperately needed glasses (his nose was no more than an inch from his checklist) checked our room number and invited us to sit down. We subsequently learned that the workers in the hotel earn about 80 pesos a day.  (10 pesos is 4p)

On this basis the poor man’s glasses could be a long way off……….

Breakfast was good and we began to find out who our travelling companions were to be. We learnt more at our first meeting of the group – all but Gary who we learnt later had put his clock on an hour rather than back (I am still not sure how this worked……!!)) anyway they look a lively lot. We seem to have a full house for an Explore trip. We are 16 in number. We also met Ana our leader, an extremely knowledgeable, able and lively Mexican lady who talks at a great pace and I am confident will prove to be an excellent guide. (Phew. I am so glad our tour guide did not prove to be our silent ‘meeter and greeter’ from the airport!)

After an hour of introduction and basic outline of the two weeks ahead we were on the road. Literally. No tour bus today. We were launched into Mexico City on foot. This was to prove challenging to some as the day transpired, but I will record it as it happened.

We first took the metro to the city’s central square. Emerging from the gloom of the Locapolo station we were faced with a sunny space, dressed for a party (preparations were all around us for 1st and 2nd November activity).

The large ornate Metropolitan cathedral seemed to look darkly down on proceedings on one side of the square and on another the probably larger, but smartly severe National Palace lined another side. Occasional small clusters of people were applying face paint and huge feathered head dresses in what appeared preparation for the day’s entertainment of passers by of dancing and replicating the rites of ancient ancestors.

We first visited a small archeological site showing the only remains of the huge Aztec city of Tenochtitian demolished by Cortes and his 50 Spaniards when they arrived to claim the area for Spain in the 1500’s. More of this later, but I will not deceive you here. I am finding the unpronounceable names difficult to absorb so my diary, while trying to capture the spirit of the story, is likely to fall short of the detail. Those wanting more detailed information are advised to look elsewhere!

We moved off from this to interior of the Palace. A large colonial building, it’s major treasure (and what a treasure) are the huge wall murals of Diego Rivera. One time (or in fact several time!) husband of the amazing Frida Kahlo.  This staunchly communist painter dramatically tells the history of Mexico through all its troubled stages in a giant, larger than life series of paintings on the wall of the palace. They are awesome in the true sense of the word. My photographs can only provide a hint of them. Ana made them come alive as she took us through them from early inhabitants, through mighty, human sacrificing, civilisations to Spaniards, American and French interventions, the abusive corrupt power of the church, the literal branding of the indigenous people and beyond. The story is incredible. The paintings are fantastic. Sadly Rivera became seriously ill before all the panels were completed but those that were there were wonderful. Showing only slight damage from the earthquakes that are such a hazard to the area, they retain their glorious colour and vibrancy. I loved it and we were so lucky to have such an enthusiastic and knowledgeable person in Ana to take us through them. A truly memorable experience. What a start! 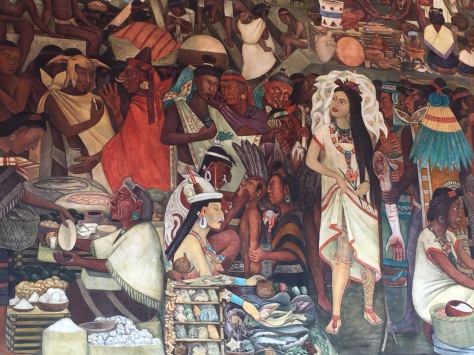 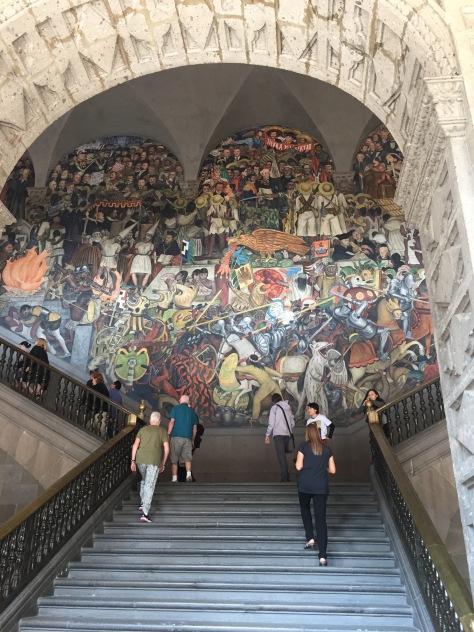 We eventually left the palace and Rivera to return to the square. By now it was much busier. Stalls selling all manner of food and trinkets had been set up around the cathedral and the Sunday morning strolling families enjoyed the sunshine and the spectacle. We made a brief visit to the Cathedral itself, despite the well supported mass taking place. It was groaning with the gold carvings and dusty altars of these ancient buildings of catholic worship. The young choir boy leading the singing had a beautiful voice and the music echoed up to the arched ceiling but somehow it did not sit well after the scenes Rivera depicted on the walls of the palace. I was not sorry to leave the incense and chanting behind and once more get out into the sunshine.

We returned to the metro to travel to the Museum of Anthropology, a must for any visitor to the City. What a joy it turned out to be and more than lived up to its reputation. Despite alighting at the nearest metro stop, the route there through the large Chapultepec Park was crowded with people and the thoroughfare was lined by the (by now) inevitable stalls selling food, toys of all sorts, masks and souvenirs. There was almost a carnival atmosphere. However, the sun was quite warm and it was a long walk and maybe a step too far for some in our party. We eventually arrived at the museum, an amazingly modern building, quite beautiful in its own right. Built in 1964 by Pedro Ramirez,  it is huge. After a reviving lunch we set out to see the highlights of the museum. Many of the exhibits we saw – and we saw very few of the rich pickings available despite being there all afternoon – gave us the opportunity to see some of the artefacts found in the archeological sites in the City and the other locations we are to visit during our tour.

I think I should say at this stage as I try to recapture the experience, my ability to retain what the pieces were, where they were found and their significance, is very poor. Nevertheless, I want to record the experience because it was very special.

One of the first things we saw was a huge statue of the goddess of water. Her name Chalcchiuhtlicve (now you understand why there will not be too much detail here!). She was found at Teotihucan the next archeological site on our agenda. The statue stood about 24 feet high. The detail was amazing. Eyes, lips, earrings, necklace, hands, skirt and sandals all clearly visible. She was one of my favourites!! 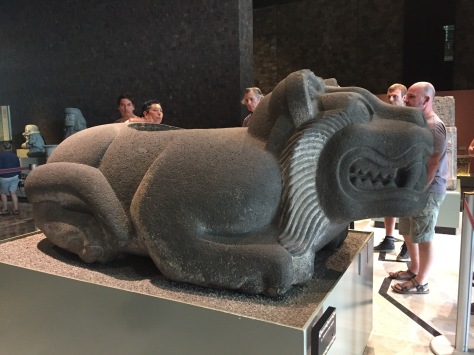 The next major figure was Ocelotl, the Jaguar, found in the City. His striking pose was impressive but also allowed us to see where the Aztecs, now more correctly called Mexicans (pronounced ‘Mecheecans’) placed the hearts of their human sacrifices in the hole in the top. Nice……

I thought the painting of the Aztec City demolished by Cortes was useful to see how it was built on the lake, now the cause of the real problem of sinking that Mexico City faces today. There also a scale model of how it is thought it looked. Seeing this it was even more amazing how quickly it was overpowered by the spaniards.

Another astounding piece was something called the Tizoc Monument. A large round stone with a recurring frieze showing a gladiator type warrior with a very exotic headdress clearly pulling the hair of his unfortunate conquest, the ruling god. 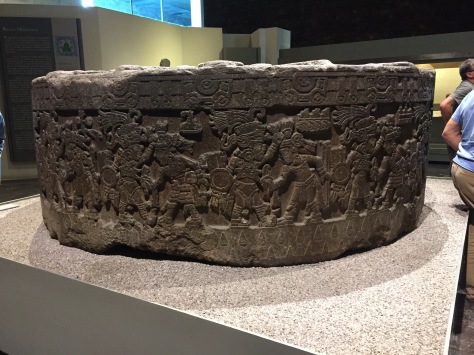 There are just two more items that I feel I must record. First the incredible round stone disc now known as the Sun Stone but previously thought to be an Aztec Calendar. A very detail item, it is an extraordinary example of Mexican carving, the meaning of which is still being considered.

Finally, two heads of the Olmec people. These lived in an area we are not going to visit but they were so impressive I felt they had to be included in my photographs. 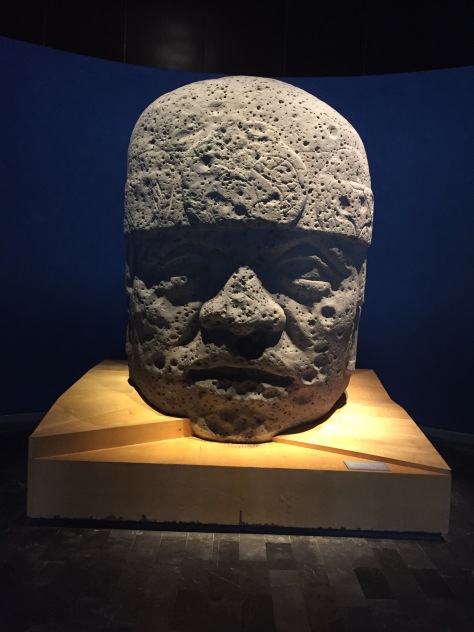 The heads marked the end of an amazing afternoon of information about the indigenous people of Mexico and was probably as much as we could absorb in an afternoon. A bit battle weary, we set out to experience another form of transport. The Mexico City bus. After a short wait, what looked to me like a full bus pulled up. It was certainly more full when it pulled away with the 17 of us and a few more besides added to the numbers on board…….

We arrived back at the hotel quite tired but elated by the things we had seen and learnt. It was fascinating stuff!

Supper was interesting. The consensus was that it was necessary to eat somewhere close at hand. Where we ate was a local tacos cafe. The food was very interesting but somewhat confusing. The descriptions escaped us somewhat and the portion size was hysterical. Monica ended up with a very nice plate of cheese on toast and I had a small disc of taco (maybe 2 inches in circumference!) with a small heap of pork, onion and pepper topped with a minute slice of pineapple! It was delicious but gone in a trice. It took so long to come that I had not got the energy to ask for something else, but it was very economic! My supper – taco and beer – cost £4! A bargain!

And so to bed with another 7.00 am breakfast in prospect. Tomorrow our first pyramids!