After a very turbulent night, a storm raging all around us, we woke up to a much calmer morning. The evidence of the night’s rain was all around in the puddles and dripping awnings. Young Apollo had done well!

It had the makings of just a driving day as we had decided instead of getting to Busselton, our last stop before returning to Perth, for just one night, we would drive straight to Busselton and have two nights there. It seemed quite a good idea, particularly in view of the weather on this southern coast. Busselton is quite a bit further north. With this in mind we secured the equipment in the back of the van and set off. We took the road out of Albany towards Perth and then turned left along the Muir Highway at Mt Barker. We had not been going long on this stretch when we came to an area where there was evidence of a very recent fire on both sides of the road. We could smell woodsmoke.  In some areas there was still smoke rising up from the ashes. It did not affect our progress but madeus very mindful of the impact of bushfires. There are notices everywhere about them.

At Manjimup, where we had originally intended to stay, we had a bit of a pit stop, but decided we weren’t missing too much by not overnighting there. From Manjimup we took the Western Highway to Bridgetown and then the rather beautiful Brockman Highway. This gave us a real change in the landscape. Here there were vast expanses of cleared ground and rolling hills with trees scattered on their tops.  You cannot look out on these huge cleared areas without thinking of the men and women who worked on clearing it of the trees and undergrowth that makes up the Australian bush. It must have been backbreaking work. Sheer grit and determination. For us it provided a very attractive backdrop to our journey. To them it must have been hours, days, weeks and months of heartache.

In contrast, today there are a number of ‘wineries’ along the way all encouraging the passer by to try their wares. We maintained our high resistance. We still had some way to go.

At Nannup we took the final turn to Busselton. Back on the west coast we arrived there at about 3.30. Although we had experienced mixed weather during the day, we arrived at our destination in bright sunshine. We asked at the tourist office for the least commercial caravan site and were directed to the Kookaburra Caravan Park situated just behind the famous Busselton Jetty. There is a lot of work going on on the seafront here and our site was just behind it – next to the cemetery!

Once again it was very busy and we realise how lucky we have been in our earlier campsites. As we had been driving all day, we decided to take advantage of the sunshine and walk out on the jetty – a walk of just over a mile. It is the longest jetty in Australia we are told and second only to Southend in the world (we smiled politely upon being told this – but I did wonder if Southend was still in existence, I am sure I read that it had burnt down…..). Anyway, Busselton Jetty is in fine form and it was a wonderful walk in the late afternoon sunshine.

People were fishing, others were either strolling or travelling on the small train that carries the less able. At the far end is an Underwater Observatory which we decided we would visit on Thursday. The light was great and the walk was an unexpected pleasure at he end of the day. 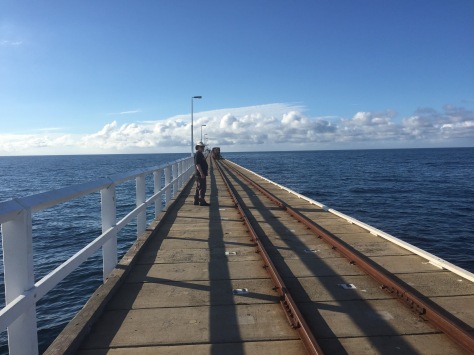 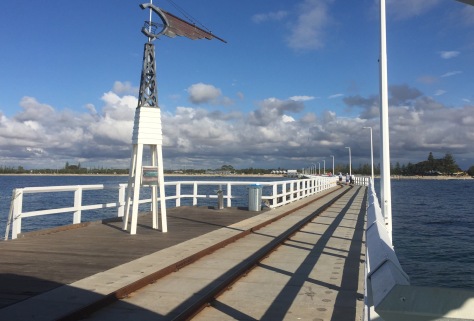 The clouds had begun to form on our return journey, but the light over the water was very special.  You can fish on the jetty throughout the day and night and we met a number of fishing hopefuls, armed with their equipment,  heading out as we walked back to the beach.

Supper was barbecued lamb cutlets which were very nice with the vegetables we had purchased along the way, all washed down with our Margaret River wine. Perfect!!

One thought on “Wednesday, 27th March”