It was going to be hot, so we decided to get up and out early. We had decided to spend the day in Fremantle or ‘Freo’ as it is locally known. City buses in Perth are free, so we hopped on the Red Cat to the station and caught the train out. It only takes 20 minutes but it is said that the temperature in Freo will always be at least 5 degrees lower than that of Perth.

I have to mentioned here that we met an ‘old’ English chap at the bus stop. He had to be English he had black socks, sandals and a sleeve less v-necked sweater over a t-shirt. Anyway, he had no teeth. He was 73. 5 years older than me. Keith has carte Blanche to leave me if I deteriorate that much in five years. It is written!

Back to the day. Fremantle is great. It has a wonderful atmosphere. Very laid back. It has a lot of things going for it – a lot of water front as well as the big docking area we saw when we went to Rottnest Island, a big indoor market, and a couple of breweries for good measure.

First stop for us was the market. We would have had a wonderful time there had we been staying and cooking – as we won’t, we just looked and sampled and soaked up the atmosphere. There was all sorts of things for sale in addition to the food. It was busy and bustling. Outside there were performers and musicians. It had a good humoured, carnival feel. The sun shone, but there wasn’t the intense heat of Perth.

Having made a thorough investigation of the market and all it had to offer, we made our way to the water front. It was a colourful scene. First we came to a big Ferris wheel and skate board park, with young people performing amazing feats on their skate boards and younger chaos precariously weaving in and out of them on their scooters. 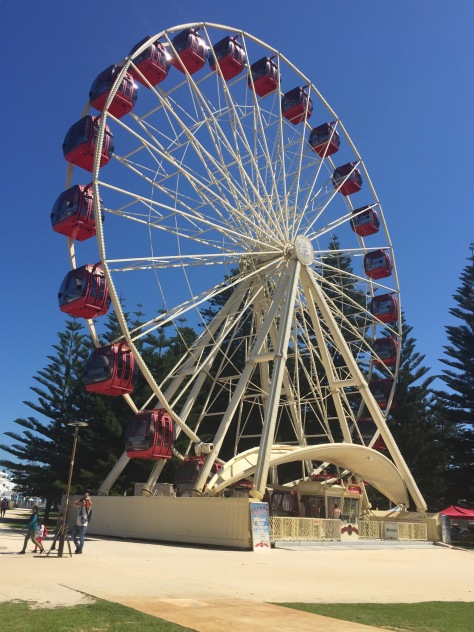 We crossed a railway line where a busker played blues on the guitar and had a small snare drum for any passing player to join him. A nice touch. We then found the Little Creatures Brewery. 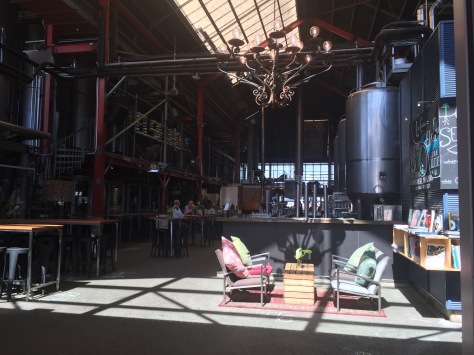 Quite an amazing set up, with its frontage on the water. At this pre lunch stage all was quite calm, with the odd person having a beer. An hour later it was mayhem, but more of that later. We walked out onto the boardwalk around the harbour. This area had started life the fisherman quarter and there were two magnificent bronze figured of fishermen on the Quay. 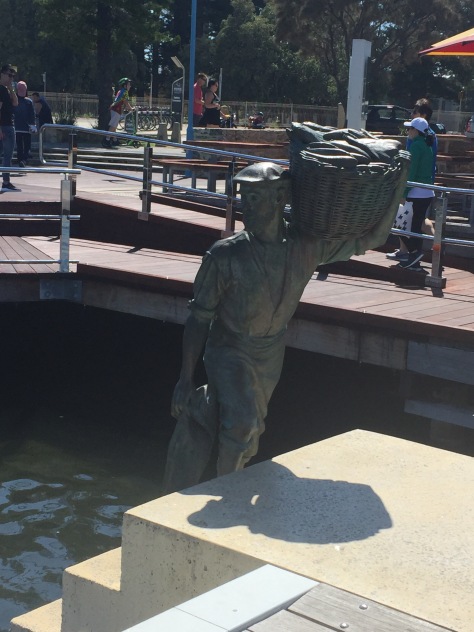 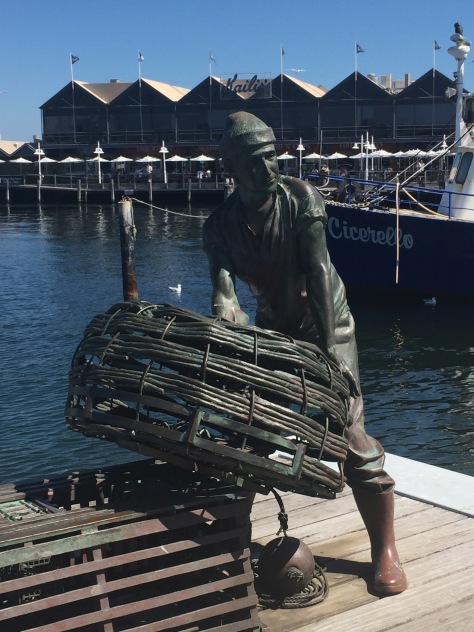 More people were beginning to gather as we approached midday and the Saturday lunchtime crowd began to assemble to take advantage of the sunshine and the location. The place was abuzz, it was great.

We walked on, taking the Manjarree Trail towards the various art galleries. This follows a route of the Nyoongar aborigines along the coast. The galleries and workshops were in old sheds and building on the waterside. In one we found the work of the sculptor who had made the fine bronzes we had seen earlier on the waterfront, Greg James. We had also seen his work in other places, most memorably the pregnant whaler’s wife in Busselton. It was an amazing workshop – definitely a place where magic happens. A very nice lady showed us the wax model of his latest work which is in preparation. It was fascinating. What a privilege.

Leaving here, we passed a short underground passageway or tunnel carved out by the whalers apparently. This went under some buildings, including a sturdy Goal. Another gallery contained beautiful pictures of marine life in startling blues, greens and oranges. Fish of amazing proportions and colours. Piercing colours. Wonderful.

We meandered back along the waterfront and joined the pandemonium at Little Creatures. I think for Keith it just had to be done. The beer was great. The food good. The noise deafening and the chaos amazingly well managed by superbly trained staff who good humouredly weaved their way between drinkers, wanderers, table hunters, children chalking on the floor and the many tables, to be charming, take orders, deliver food and clear debris. What looked like total confusion was a well oiled machine. The cooks worked away in a kitchen totally on display. A clay oven provided an endless stream of pizzas. Saturday lunch time at Little Creatures………

We left the brewery to pass the busker, who had found a passing drummer who was doing his thing and thus forming a slightly incongruous duet, back past the Ferris wheel and skateboard performers. A little retail therapy and another beer and we were on the train back to Perth. Very satisfied with our day and Keith has found another favourite spot on earth.

In Perth we very cleverly found the correct bus home, missed our stop and managed another sighting of the WACA. It was then back to the apartment to consolidate our belongings. We are allowed a small carry on bag for the train while the rest of our luggage goes in the baggage car. Tricky but do-able with a bit of dedication. Hopefully.