Another chilly but bright morning.  We had breakfast watched by the local kookaburra and his friends the magpies.

It was ‘moving on’ day so things have to be stowed fairly carefully to prevent breakages.  We are getting quite good at this!

It has been a great couple of days but I am not sure we totally exhausted the delights of Walpole, but Albany calls and we want to call in to Denmark on the way…… We had in fact got on the road very promptly, so we decided to call in to a place called, a little presumptuously I thought, Beautiful Beach. (I thought we should be the judge of that…..) In the event we did not get to give our view because the road went round in something of a circle and the said beach did not seem to materialise! We later resisted the urge to take a sign to Conspicuous Cliff on the basis that we ought to judge that too, but resisted the temptation.

We reached Denmark just after 11.00 am.  It is not a large town but has the distinct feeling of being somewhat ‘new age’ – there was a distinct smell of joss sticks wafting out of one or two shops!! We wondered around the town – it did not take long – and after a quick shop we boarded the trusty Apollo and headed off for Albany.

Albany is a much bigger place altogether.  Rather than heading for the centre of town we headed out to the Middleton Beach where we had been told there was a campsite. There was.  And a lot of campers.   It is a bigger and more commercial set up than we have to date experienced and would probably rather not experience again if the truth be told!  A saving grace was that the ocean was just a sand dune away and we were to go to sleep with the sound of the sea – but that was later. Middleton Bay is seen as a safe haven for ships as it is another of those big inlets and there were one or two big ships bobbing about. 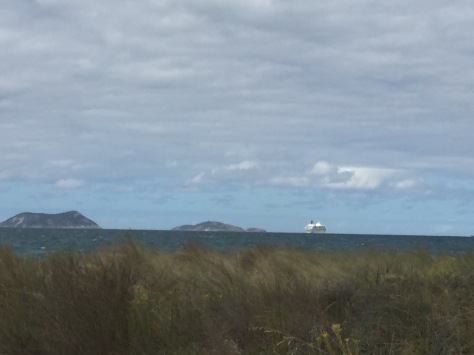 As it was, the bright start to the day had deteriorated and it was overcast and windy as we wandered along the beach front to find some lunch.  We found an excellent platter to share which  was very yummy! 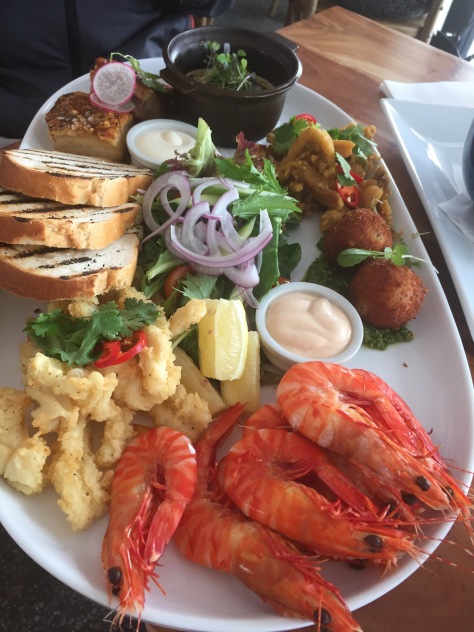 We also sighted a new bird……. 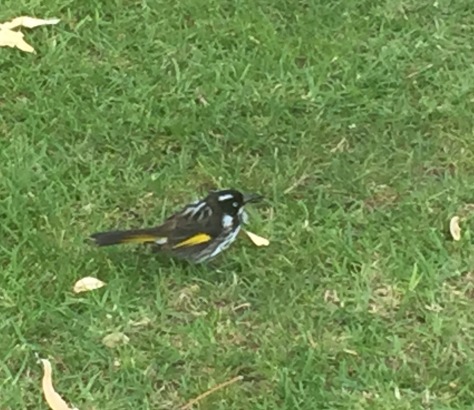 Given the somewhat inclement day, we gave ourselves up to getting our communication up to date on a very slow wifi connection and adjourned with Rob Brydon reading his autobiography on audible.