It was dulling heavily and there had been a heavy downpower just before 7.00. We had no great hope of the day. Nonetheless we set out to head up the coast to the northern most point at Cape Naturaliste.  We first went to collect Helen a supply of the coffee she has been drinking (at the coffee house we visited on our tour on Friday) throughout our stay.  After this it was straight up Caves Road, first for a little retail therapy at Yallingup and then it was on to the lighthouse car park.

By the time we reached the car park, the drizzly rain had stopped and there were patches of blue in the sky although it was still fairly overcast.  We set off down one of the smart concrete paths but this soon ran out and became a sandy walkway.

At regular intervals there were signs indicating where we were.  The landscape was a bit confusing.  It was pretty blustery!    To our right, peeking over the top of the hill was the lighthouse which has stood here for many years.  The small gift shop housing some interesting but odd machinery was one of the three lighthouse man’s cottages.  They were all painted white and stood out on the stony hillside.  There was an interesting chap in the lighthouse shop – when asking after his recommendations for where to walk for good views, he rather morosely told us we had ‘better views in England’…….. helpful.

As we descended towards the sea, the rugged coastline became more evident and waves crashed against the rocks below us.   This is apparently the perfect spot to watch whales during September and November.  It was windy which was exhilarating but the flies were irritating.  We continued along the path and eventually came to a timbered lookout point

It was very gusty here and the waves were crashing into the rocks along the shore line. 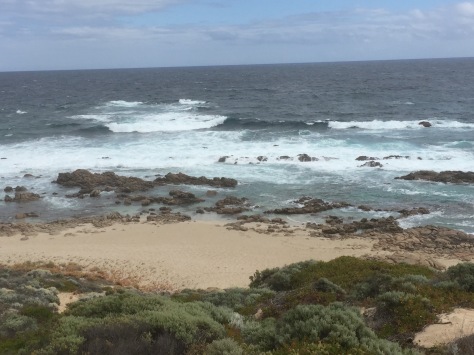 Th sun was gradually emerging through the clouds.  We turned to walk back up the path and came across a sign regarding abalone fishing – in great detail.   I could not believe it was the dreaded abalone again.  I am sure they are just trying to haunt me for not liking them!!

What is it about these things that makes them so attractive?!? Not to me!  It must be an acquired taste!!
Turning away from the rules of abalone fishing, we meandered back to lighthouse to consume our lunch away from the flies and inspect the lighthouse itself. It was a jolly affair and I am sure caused some consternation to build as the location is somewhat remote.   Apparently some vital part for it was made in England and, having safely made the journey, was smashed on the rocks when it was being delivered down the road……  I’m sure they said ‘oh blow’ before sending for another one and waiting another year for it to arrive!

By early afternoon it was time to return home.  By now the sun was out and it was very pleasant.  After picking up a few supplies from Margaret River, it was time to return home to Kitty Kat Lane and to do some laundry, not b I got sure when the next opportunity may arise. While sitting outside waiting for it to dry, our friendly kangaroo came even closer and a group of galah’s (pronounced galars) started to demolish the grass in the next paddock. 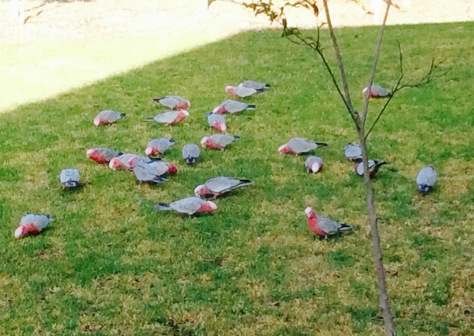 Our meal was somewhat delayed while we resolved an electricity problem (The electric pan fused the lights) which reduced our meagre cooking equipment to one ring, but supper was, as always, worth waiting for!  We shared a last bottle of bubbly to mark our last supper with Helen on this trip – she is coming over to Europe again in the summer – and we retired to bed.

Tomorrow rage next phase begins – Apollo takes to the road.  I may be gone for some time as I am not sure where my next wifi link might be……..