We set off early to catch the boat to Rottnest Island. It was 25 degrees at 8.00 am but the sun shone and there was not a cloud in the sky, although it did build up a bit later.

As the Rottnest Ferry pulled away from Elizabeth Quay (Betty’s Jetty to the locals!) we looked back on a very modern sky line and water front.

Nearly 2 million people live in the cosmopolitan city of Perth, the capital of Western Australia. (Western Australia is so big that if it was a separate country it would be the 10th largest in the world.) The nearest city to Perth is Adelaide which is 2,000 miles away. The Swan River Colony, the original settler site, was in fact some way down stream of the current Perth. The Swan River is 67 Km long and very wide. Beautiful, very expensive, modern houses look down on the river from its sloping banks. The whole picture is of a confident, successful boom town. In fact it is on a down turn from a double boom. For the last 10 years mineral mining and building off shore gas rigs has brought riches to many.  Sadly the tide has now turned leaving many high and dry.

The river is comparatively shallow and not suitable for large shipping until you near its mouth at Fremantle, Perth’s close neighbour. It took us about an hour to reach ‘Freo’ as it is known in local parlance I understand. There was no quibble about large shipping here. The sight of ships being loaded with containers did my heart good as an old shipping employee……. 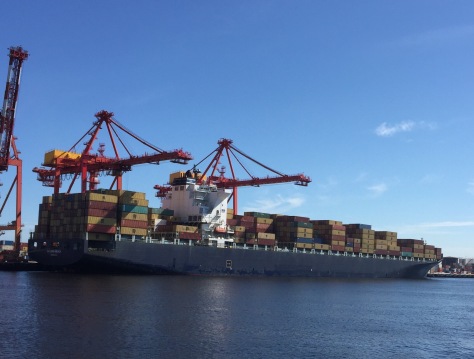 They even make containers into art here – as this sculpture would indicate! 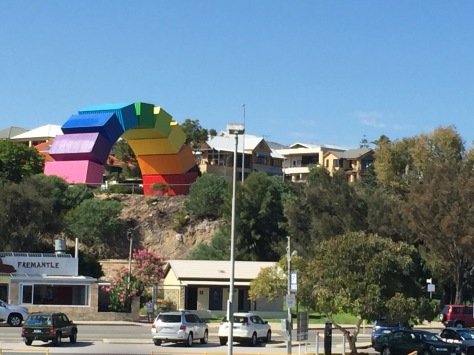 Once we had picked up additional travellers at Fremantle we were soon out past a very nice green lighthouse and into the Indian Ocean and the ship’s engine got down to business. This was a grown up sea with grown up ships in the roads waiting to get into the docks. 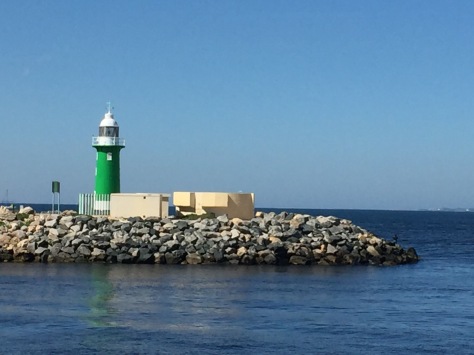 25 minutes and we were at Rottnest, an island just 11 Km long and 4.5 wide. It is an island made for pleasure. There are no cars on the sandy roads. If you want to travel around it you walk, take the local shuttle or tour bus or cycle, as the large number of bicycles travelling with us indicated. The ferry was full to bursting with young and old in various stages of extremely casual dress. A boat full of people going out to play!

As soon as the engine stopped it seemed, its cargo of sun seekers were tumbling off and either collecting their bikes or heading off down the jetty, keen to take up their chosen activity for the day. We were carried along on the tide of humanity and set off for the shuttle bus for a tour of the island. And what an island it is! White beaches, blue/green seas, rocky headlands……. it has it all.

An hour later we were back at the start and ready for a cool drink and lunch overlooking the jetty and boats bobbing in the water. There seems to be quite a lot of this at the moment….. 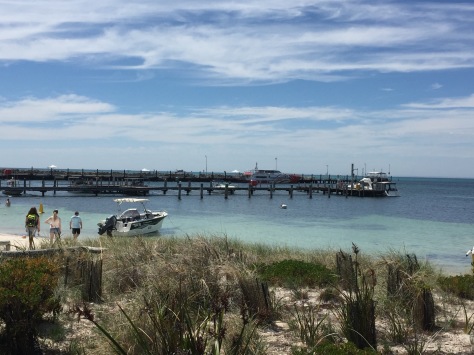 We had decided to do a walking tour to learn something of the history of the island. At 2.00 pm sharp we set off with Pauline, Rottnest Volunteer, (we must be of an age – there are very few Pauline’s in the recent past!) who was doing the history tour of the day. There was only the two of us. The Quokka tour was much more popular! Having said this, we had only gone a few yards when our first Quokka came into view and very kindly posed for us!

There are reckoned to be 8 – 10,000 Quokkas on Rottnest Island. They are little marsupials, about the size of a cat, but with a tail like a rat.   He seemed happy enough!

We then heard the tale of the island.  It was first discovered by a Dutchman in 1696 who thought the Quokkas were rats……

Later it began to be farmed, but in the time of the gold rush it became a penal colony for aboriginals as it was found that they did not mix well with the other prisoners in the prisons of Perth.  An original prison door…..

The prison buildings and all the other buildings of the time were built by the aborigines. They must have wandered at what they were building – as one was the church which still stands today.  A church built without nails….

The original buildings were white limestone but this was later toned down to ochre by using rusting horseshoes in the mix………! And ochre they are today.

The island is surrounded by a reef which has caused grief to a number of ships over time – there are 12 known shipwrecks along its coasts.  At an early stage it was realised that a pilot was required to take boats safely over the reef.  To this end a pilot craft was built on the lines of a whaling boat, a pilot and a crew of five oarsman and a coxswain were appointed to row him out to ships that wanted to make the journey to Fremantle.  It then took them 8 hours to row to Fremantle and another 8 hours to row the pilot back. The pilot boat still sits in the boat house.

The island was given another role in the First World War when it became an internment camp for Austrian, German and Italian prisoners apparently…..  I would have those got them somewhat ‘off piste’ but there you are, that’s what we were told!  The problems that they brought with them were olive and fig trees. They planted them, and they are now huge, but the Quokka’s get drunk on the figs!  The fruit falls to the ground, it then ferments in the sun, the Quokka eats the fermenting fruit – and hey presto a drunken Quokka!  What fun!!
The island is purely a holiday destination now.  The corollary to the story that I found odd is that the later prison buildings – built in a circle – have been converted into a hotel – with a swimming pool!  Why would you spend time in an ex prison in a very confined space when you have all that wonderful scenery outside your barracks?!?

All very odd!
Anyway, I was paid back for mocking.  Having completed our history tour I had an ice cream. Very naughty!  I then proceeded to sit in a crumb of chocolate in my white trousers! Aargh!!! How can a little chocolate go such a long way?!  Disaster!

Never mind – the local shop had an end of season sale, new white shorts were purchased and we joined the trippers home without Keith disowning me!  We got off at Fremantle and caught the train to Perth, beating the last ferry to Perth home.  We will have a day in Freo when we have completed the next phase of our journey.  Tomorrow we are reunited with Helen and pick up the Motor Caravan – small size!