A wet day was advertised, so we abandon what was to be a fairly lengthy walk and instead headed for the Bay of Fires, further up towards the north east of the island. Once more with Helen at the wheel we trundled along the coast road. We past various small settlements and eventually arrived at a town called St Helens. This was originally a place used by sealers and whalers and had an economy based on the tin found there, but now tourism is its main activity, particularly because of its close proximity to the Bay of Fires, a beautiful long bay of white sand which runs from Binalong Bay to Eddystone Point.  The name was given to the bay by a Captain Tobias Furneaux who was travelling with Captain Cook. He saw the aboriginal fires from the sea and the Bay of Fires was born. There are no aborigines in Tasmania now. They were wiped out by the white people who invaded their land, although now their special places are respected and treated with care. Yet further evidence of the British history not being covered with glory!

The Bay of Fires is a region of long white beaches, blue water and orange-hued granite rocks ( the colour of which is actually produced by a lichen).

This is whale country but they have not yet started moving north so there was not a Wales tail in sight.  We wandered along the white beach which was scattered with the most amazing seaweed. 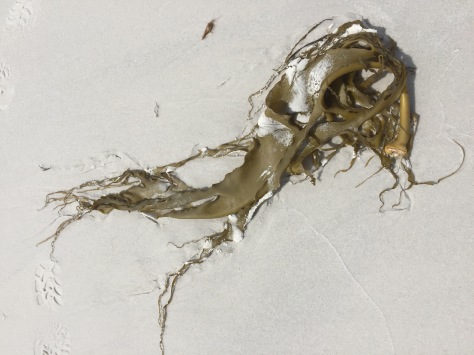 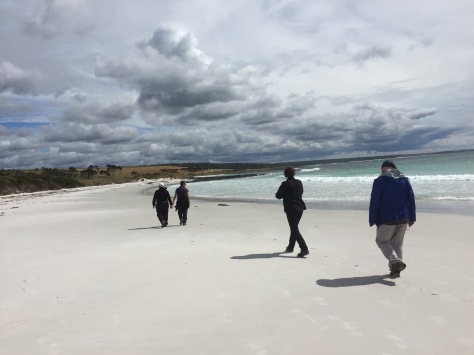 At the end of the beach we turned back, retracing our steps to the car. We had had the odd spot of rain and the clouds were building up, but the all day deluge had not materialised and we were able to nearly get back to the house before he rain started.

It had been another excellent day!!