Having made the dreaded toe as comfortable as I could, we left the beautifully converted barn where we had stayed overnight, to head off towards the Medway as our first challenge of the day was to walk over the motorway bridge.

Our route took us first through woodland and then over a large field that gave us our first sighting of the Medway before we ventually emerged on a road that first took us under the Eurostar train line and then brought us out near the pedestrian access to the 3/4 mile bridge over the Medway.

It looks a pretty long bridge as you start out….. 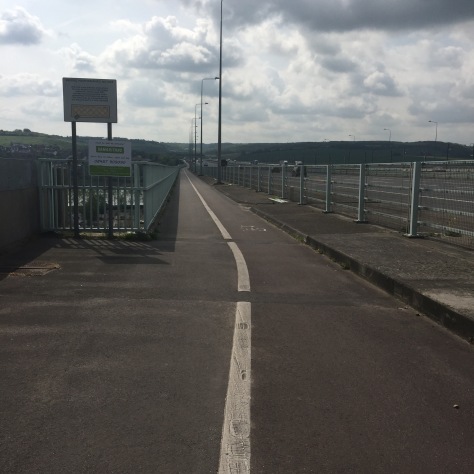 The number of the Samaritans appears at regular intervals along it.

In the far distance the spire of Rochester Cathedral and the castle just showed above the Rochester city skyline.

Having reached the other side of the bridge, we walked along a road that took us underneath the motorway and then another that this time took us over the Eurostar line.  We then followed a field side path which, when looking back, gave us great views of the bridge we had just crossed.

Our route meandered behind the villages of Wouldham and Burham and then along a road that took us past a large house called Fair View, which was something of an understatement of the view they had down into the valley.  We were the at Blue Bell Hill usually known as a busy road intersection on the M2 but standing on the actual hill it was a very busy spot, although the noise of the traffic could not be ignored.

From here we turned right down the Hill and I, at last, got to see the ancient stones of Kits Coty.  I cannot tell you how many times in my life I have driven up Blue Bell Hill and seen the signs to Kits Coty and wondered what it was all about.  Today I found out! 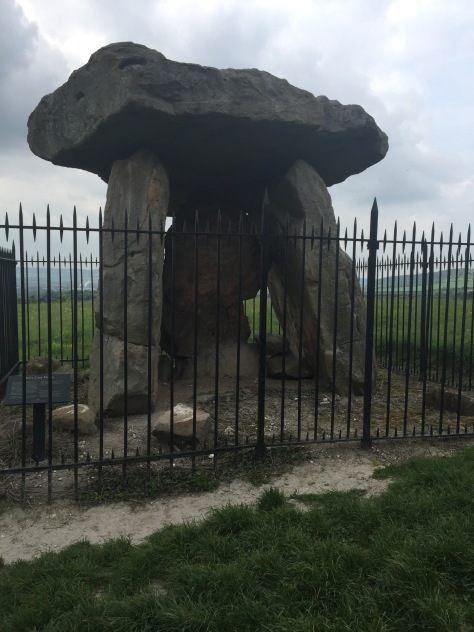 Kits Coty. The remnant of a Neolithic burial ground and reckoned to date from 3500 and 2800 BC.  It is a shame it has to be fenced off – it looks as if it shoukd be left free as part of the landscape……
There are a number of these old stones about in this area.

Shortly afterwards there was to be my most serious disappointment of the day.  After crossing a railway bridge I heard an ice cream van!  An ice cream, I thought.  Great!  As we rounded the corner there it was – and just as we reached it – it pulled away?!? So near yet so far.

There was little compensation in stopping to nibble my nuts for lunch by the White Horse Stone – another Neolithic item.  Somehow I would still have rather had an ice cream!!!

After lunch we headed off through woodland and then out round an enormous field of oil seed rape. Ugh. The crop was well above my head and the smellso pungent.  It was such a relief when we left it behind. Then, through another wood and after a steep climb we were rewarded by another North Downs Way milestone in a stand of yew trees giving us an indication of the distance we have travelled from Farnham. 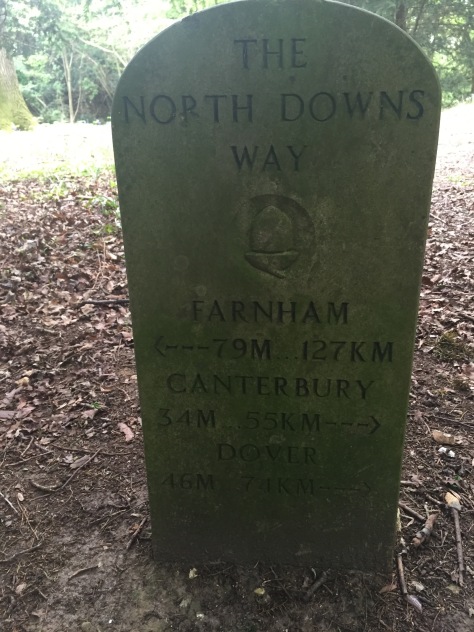 We left the wood over more Neolithic stones 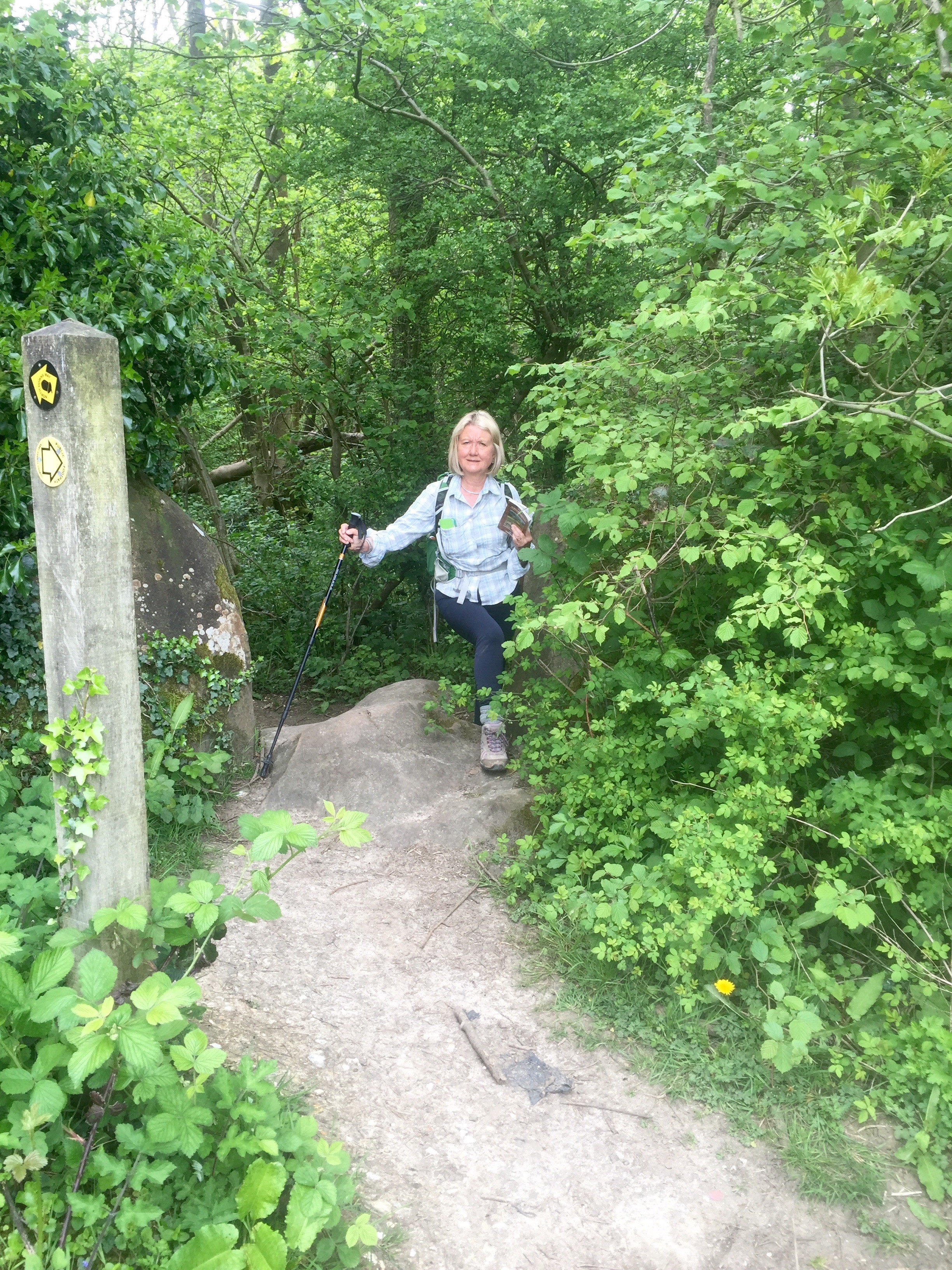 Walking alongside another field we saw some amazing fungi…… 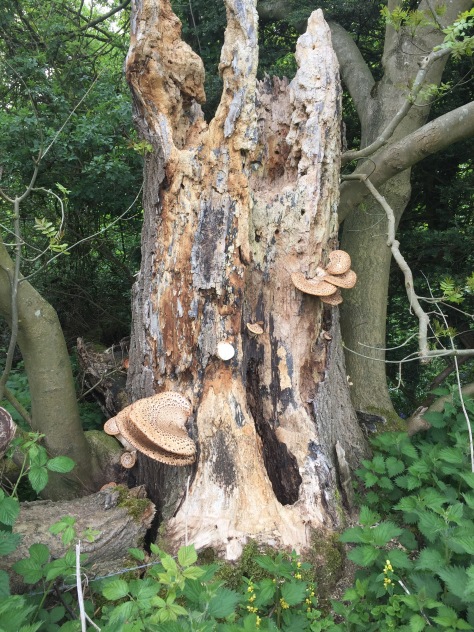 Tremendous!
It was then another long stretch through a wood and then out on the road and then on again, back into Boxley Wood. When we emerged from this, we were on the outskirts of the divided village of Detling.  The busy A249 runs through the middle of it and the rather beautiful Jade’s Crossing has to be used to get from one side to the other.  It was then another mile or so to Thurnham. We decided to walk down the lane rather than take to another high field edge and we came to the Black Horse a pilgrim inn for many years…… 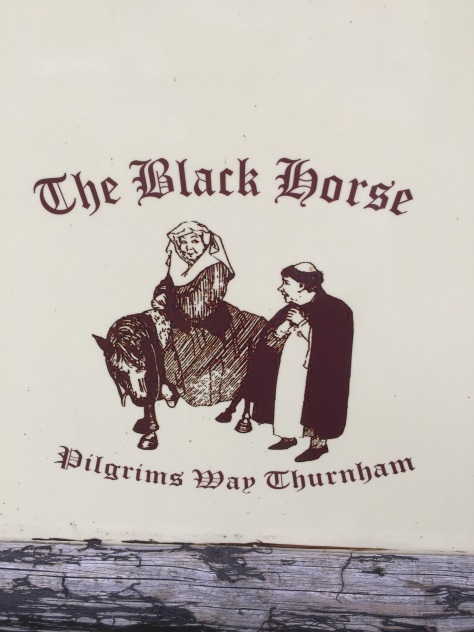 2 thoughts on “Cuxton to Thurnham”