we woke up in our rather stunning apartment – which feels very ‘New York loft’ or how I imagine one of those might be!  It is all very open plan and we have an amazing view over the city in the distance and in the middle foreground  the famous ‘MCG’ (Melborne Cricket Ground). 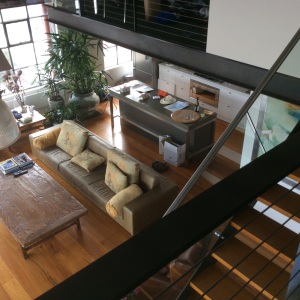 The building started life as the Melbourne Kayser stocking factory!

However, the amazing bits of the day were to come,  first the car had to be returned.  At my insistence we were up at the crack of dawn – my feeling being being that the church goers of Melbourne might be a bit more thin on the ground than the MCG football crowd the day before and might be a bit more lenient with me.  With a heavy heart I left the building – to find the sat nav got us there in one go – Avis were only 6 minutes away – tortured minutes they were but there were only 6 of them!

There were two lovely ladies at Avis and they took pity on our situation and gave us money off for the nasty Sat Nav which we did not expect and told us how to get back to base.   And so it was that we had our first tram ride.  Whilst we were not as yet convinced about Melbourne, everyone we met wanted to help and were lovely.

Back at our fourth floor eyrie we both made our preparations for our outings.  Keith was off to see a football match with his chum George and I was off to lunch with Paul Fanthorpe an old friend from PPP days.

I am not sure how much Paul paid for the sun to come out in time for him to pick me up in his open topped Ferrari – however much it was it worked and I was whisked off –  doing a bit of sightseeing on the way – to the  home in Caulfield North Melbourne that he shares with his friend Michael.  And what a home it was……..

a 60’s town house very tastefully  restored to its original glory and more.  It was beautiful.   One of the most stunning things for me was the hand made 60’s wallpaper shipped in from England…… In addition to the rich but tasteful decor were their two English Bulldogs, Miss Moneypenny and Mrs Slocombe ( we wondered how they called them back in the park!) – both rather awesome ladies who seemed devoted to sunbathing………

It was great to catch up with Paul, talk about old times – which he reminded me started 25 year ago! – old friends and acquaintances, family and experiences. It was just fantastic to see him doing so well. Michael was lovely too and very tolerant of our reminiscing.  He actually owns the house and played a major part in its renovation.  The art was flamboyant and interesting, the pool looked sparkly blue and inviting even to a non swimmer like me and I felt thoroughly spoilt just being there. Lunch was a delightful crab risotto followed.by barbecued Moreton Bay Bugs.  They were delicious. We have seen them on menus once or twice but not tried them  but they were just perfect ( now who has run out of superlatives?!)  I have to admit to feeling something of a country bumpkin in these surroundings, which rendered me somewhat quiet and thoughtful for the rest of the day……….

As I was the keeper of the only key to the apartment, I arrived home before Keith and continued to catch up with the blog while watching the sun set over the city from the window