The speed of the night had effected the required result and by 7.00 we had made up speed and were back on track for time and our ETA was back to 11.30.

Just time for a leisurely breakfast with a very nice lady from Adelaide, rather helpfully sporting a beautiful turquoise/green opal ring, very much of the shade I might like if I were lucky enough to have one….. (?!) She was lovely and recommended a lot of places to visit that I could not quite grasp – nevertheless I made play of making lots of notes in order that she felt helpful. She was apparently a regular Ghan traveller as she had daughters in both Darwin and Adelaide and travelled between the two locations several times a year. It all seemed very satisfactory. 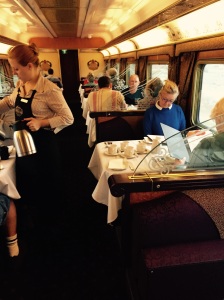 Breakfast over it was back to the blog as I was still trying to catch up from two lost days when my IPad had died, but I was nearly there. It is quite difficult to have an experience and then reflect on it, while at the same time having the next experience – if you know what I mean!

At 11.30, prompt, we pulled into Adelaide. It was an enormous goods yard, with containers and
defunct engines and general railway detritus standing around the place with grass growing around the rusting wheels and ironwork.

Eventually the doors opened and we emerged into the Adelaide sunshine.  There was general milling while people were met by friends, stowed luggage was found and taxi’s gradually cleared the area of the Ghan’s cargo of people

We found ourselves whisked the short distance to our Hindley Street apartment. We were in the centre of the student area and very close to everything it seemed. Adelaide appeared perhaps less sophisticated than Brisbane but far more so than Darwin, our two previous big city experiences in Australia so far.  Some of the buildings in Adelaide still show signs of a sort of lacy ironwork on overhead verandahs and shop fronts, evidence of an earlier era. It also seems  to have lots of bars and eating places, grazing seems to be a favourite Australian pastime.  No wonder they grow so tall!

We ventured out to find the place bustling with Friday lunchtime people. We eventually tracked down the information centre, rather unhelpfully tucked away up a side street, but very helpfully manned (that is man embracing woman) by a lovely lady who found us maps, directed us to the ‘Vroom’ (?!?) website for hire cars and even gave advice on a good opal buying place……

It would have been rude not to take up her offer to escort us to it. So we did. And now (well I will be when it is my birthday) I am to be the owner of a beautiful black opal ring courtesy of my lovely Husband. It is all sealed up to go through customs. Boo! But how lucky am I?!

After The Purchase it was back to the room for publishing the, by now more or less, up to date blog and some rest time before we ventured out on to the streets of Adelaide again. It was at this juncture that a rather serious (for me) tragedy occurred in that Air Dropping some pictures in to my blog ( serves me right for showing off!)  I lost four days diary!!!!!! I sobbed (literally!).

After blowing my nose and going to the toilet as my dear friend Lesley’s mother would have recommended, I vowed never to blog again.

However as you can see, I did eventually get back on my horse…… As it were.

Later in the afternoon, and still snivelling, we went off to find the much famed Adelaide Central Market. We found it, after visiting a most amazing map shop and then dropping in to a very upmarket hostelry (2 drinks £13), where the ‘in’ crowd of Adelaide were partaking of post working week thirst quenchers of very exotic variety. The market was excellent. Stalls of every type of food, both in its natural state and cooked, was available. We opted for a bowl of excellent Algerian lamb stew with Harissa, served by a flamboyant Algerian who wielded his mint tea pot with great panache. We got into conversation with several lovely locals. A great find and jolly evening.

We adjourned ‘home’ to pack for our two day tour of Kangaroo Island. Picking up time 6.30. On went the alarm again!