It was as a quiet start to the day.  By 9.00 am nothing stirred in Wightman Towers.  It was probably a fairly typical day after the day before or in Justine’s case, the day after the week before. However, by mid morning we were all assembled for the final brunch for this visit and our final planning meeting to establish how we were going to spend our day.

After a bit of debate, it was agreed that we would all go to Lavender Bay, a harbourside suburb on the north shore of Sydney.  Lavender Bay is named after the Boatswain from the prison hulk ‘Phoenix’, which was moored there for many years.

We took two buses and started our perambulation of the area at the Kirribilli Market. This was a real melange of stalls selling everything from jewellery to drums made into coffee tables, from vintage clothing to fancy fondants.  I think we all survived the experience without a purchase beyond some rehydration, something of a requirement all round……  Moving on, we walked towards the water. The houses were incredible, many of them quite old (in Australian terms!).  As we neared the harbour we found we were getting a very different view of the bridge and the city as we glanced it, initially through the buildings, and eventually when a wide vista emerged. 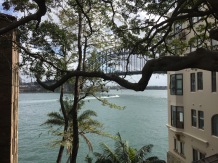 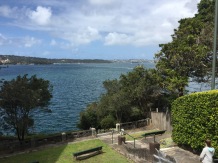 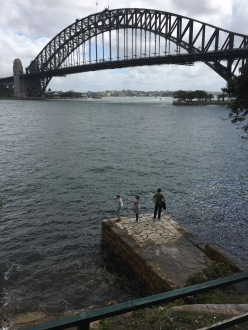 We continued to wonder along the waterside.  We passed old moorings and buildings left over from English colonialism. 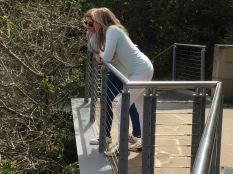 We passed the end of the bridge and watched the fishermen.  Eventually the bridge was behind us 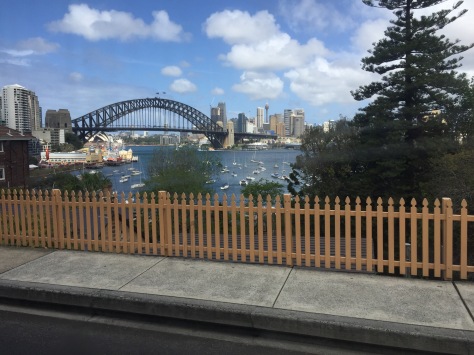 and we arrived at Luna Park, Sydney’s world famous amusement park built in the 1930’s   Since it was built, Luna Park has a bit of a chequeredhistory and been subject to several redevelopments, but in 2004 it reopened under new ownership and has been operating ever since.   Walking through the rather startling entrance, we bade farewell to the Wightmans who returned home to chores and school preparation and meandered on past the rather old fashioned stalls and slide shows 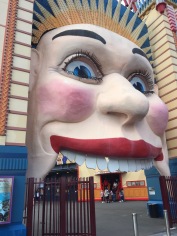 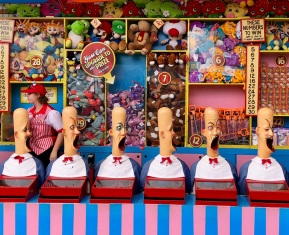 One of the things that I was keen to see was Wendy’s Secret Garden and soon after we passed out of the amusement park area we came across it as we mounted the steep steps to move away from the waterside.

The Secret Garden is a green oasis of lush foliage, native plants, fig trees and beautiful flowers.  We were lucky enough to see some of the flowers in bloom and everything looking very rich and flourishing.  Created by Wendy Whiteley, initially in memory of her ex husband artist Brett Whiteley who died in 1992 and whose ashes are buried in the garden, the garden has been maintained and beautified by her and volunteers since then.  Sadly their daughter’s ashes are also there now, but it is not a place of sadness, but more of a place to enjoy and take in the views. 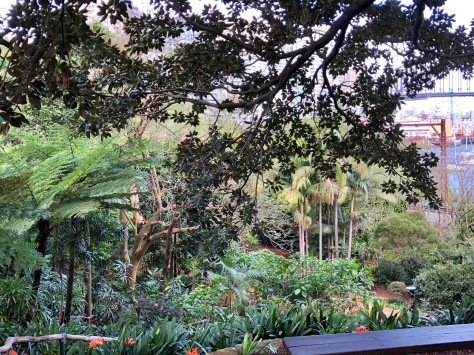 It was eventually time to turn for home. Our time in Australia fast coming to an end.

For our ‘last supper’ with the family we were all off to the local Indian restaurant. It is becoming something of a tradition for our ‘last night’, which we are bringing forward 24 hours as we are being collected at 3.00 am on Tuesday morning…..

The restaurant is just around the corner, so we did not have far to go.  We had a jolly night of chat and reminiscence.  It has been an amazing trip and choosing the top 5 moments is nigh on impossible. 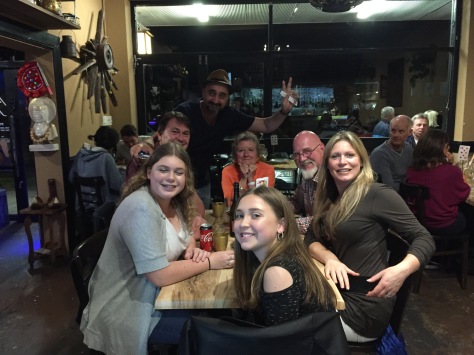 …and so to bed for our penultimate sleep.  Tony is out tomorrow night, so we said our goodbyes to him – he has been such a wonderful host and definitely one of our favourites!

One thought on “Sunday, 14th October”