Well here we are then, just leaving Hong Kong. The final stage of our second journey to Australia and time to do the IPad equivalent of sharpening my pencils, tidying my desk and drawing my margins…….. basically remembering how this blogging business works.

Travel feels different this time. I have retired. Really, really. The training and reference books have gone to the charity shop, the testing materials have been shredded, my notes have gone on the fire. It is finished. The next phase begins and I feel unbelievably liberated. Why I do not know. I have been doing very little over the last few years, so why should this be different? Perhaps it is because my last role was not very satisfying for me. Perhaps it is just that it is the right time. In any event – thank you CTN. I am not sure I proved very effective for you – but you have funded this trip and allowed me to draw a close on my HR career with no regrets.

Time to move on and look forward with excitement to our second Australian adventure. We will visit new places, spend time with much loved friends, remember shared experiences, ruminate over news and views and no doubt share the odd sherbet. Whatever the next couple of months brings, I am confident that it will be fun, memorable and life changing. Travel always is in my experience……..
So, after the shortest Valentines Day I am ever likely to experience, let’s go…….
15th February

We arrived in Sydney at circa 9.30.am.   It was a beautiful day. The temperature has dropped from the giddy heights of the recent past, but it was still 25 degrees. After a rather chaotic exit through passport control and customs, we met up with the girls – including Helen who had flown in from Alice on the 14th. It was great to see them all.

Within no time we were in the car and heading off to Newcastle, to meet up with another chum, Peter who has moved from his goat ranch where we had visited him on our last visit. We drove from the airport over the famous Sydney harbour bridge, which seemed to formally acknowledge our return to the antipodes.

Our drive north passed through suburban towns which seemed to be almost continuous for the couple of hours drive north. Just after midday we stopped to eat at a great little cafe at a place called Toronto where we ate a really scrumptious lunch on the side of Lake Macquerie, the largest permanent coastal saltwater lake in Australia. The sun shone and it was great to see the women in colourful summer attire (like butterflies or vibrant moths dazzling us after the greyness of the UK winter we had left behind).

It was only a few minutes from there that we arrived at Peter’s house – how good it was to see him. It was almost emotional when he said to Keith – ‘like MacArthur, you said you would come back –  and you have!’ Great stuff and it felt like we spent time with him at his goat ranch only yesterday. What a difference 18 months can make. We looked around his new single story home, built to limit the impact of the sun and furnished quite minimally  but with the constant backdrop of the murmuring of three great fans constantly swishing the air to keep the main room cool. Already we were feeling that this was sanctuary from the glaring heat outside. At the back of the house there was a stand of huge eucalyptus trees, providing a constant theatre backdrop of bird life to keep Peter entertained and keep him on touch with the wild life that he loves.

We spent a very happy first evening over an excellent meal remembering past shared time and travel and walking experiences that have taken place since our previous sighting of each other. It was great. Having met while travelling, it continues to be the common denominator that binds us. The conversation hopped from Patagonia to South Africa, from Spain to Croatia and beyond.

We were amongst friends.

We woke to the sound of the kookaburras ‘laughing'(!?!) outside the window around 5.00 am. Not so much a laugh as a shreak and we were not invited to share the joke.

Newcastle was founded on coal. The story goes that a chap was sent up the coast from Sydney in the 1800’s to find some escaped convicts. The convicts were never found but a seam of coal was sighted and Newcastle was born. Initially the coal was shipped to Sydney. Now it is despatched world wide with much (as in all things Australian) heading to China. Looking out to the misty horizon of the sea, huge tankers could be seen in the shipping roads leading into the port waiting to be filled with coal or grain.

The town was a real mix of industry and leisure. From the coastal path where we walked we could look inland to the docks edged with cranes and vast hoppers, busy with tugs and pilot helicopters criss crossing the harbour and outlet of the Hunter River – actively involved in getting the tankers into place through the harbour entrance.

When we looked to the seaward side, we looked immediately down on the clear waters of the rocky coastline or along to golden sandy beaches dotted with scantily clad sunbathers and the bustling activity of surfing life. In addition to the helicopters taking pilots to the ships, there were others checking the water for sharks. Along the coast path the debris of old forts and sea defences stood stark memorials to past times. Large cement structures reared up from the turfed cliff top with mangled rusting metal prey to the elements and erosion. At other points designer houses skirted the coast road and dripping surfers hopped along the hot pavement with their boards under their arms as they returned to their vehicles.  Cafes spilled their coffee drinkers on. To the sidewalk.  The epitome of Australian life.

Our route continued along the Anzac Memorial walkway which sported the rusting sculptured silhouettes of the men and women of NSW who had volunteered to go to the aid of Britain in the First World War. 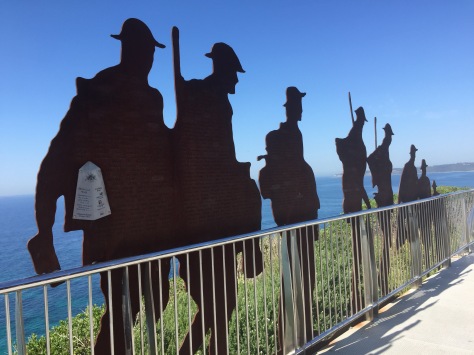 On one poignant plaque the names of all the local people who had died were faithfully recorded. A somber note in the seaside scene in front of us.

Below a school of dolphins broke the surface of the water. Overhead the sky was cloudless and the sun beat down on swimmers, sunbathers, those who walked the coastal path and the monument to the young dead whose lives ended so far from home.

We continued to walk along to the end of the bay where we found a very welcome hostelry where cold beer was very well received.  At this point we parted company with Wendy and Sarah and took off to the harbour edge to have lunch.

It was then home for us for a siesta and early evening drinks in the garden watching the antics of the rosellas and other birds in Peter’s tree theatre…….

17th February  – out and about around Lake Macquarie

Following the now familiar kookaburra alarm it was another early start to make the most of the day before the greatest heat descended (the temperature was to rise to 38 degrees by the end of the morning).   This time we headed to Lake Macquarie, starting at Wangi Wangi point – a conservation area jutting out into the lake.

We wandered through the trees to the water’s edge.  As always there was evidence of many of the trees having survived burning.  We saw iron bark trees with their tough surface built to survive the ravages of fire and paper bark and stringy bark trees that the aborigines use to make rope.
We wandered along the waters edge.  The water gently lapped along the shore line.  The sun sparkled on the water.

Eventually we turned in land again and eventually returned to the car.  As the sky was looking overcast it was decided to take a coffee break until what turned out to be a storm had passed.  We had just settled down to our drinks when the heavens opened……. perfect timing!!

The rain soon stopped and we were on to our next port of call.  This was a place called Green Point Nature Reseve. where we set out from somewhere called Dilkera Avenue to walk to Black Jack Point.  I just love the names here – they are just the business.  We seem to either have the names of all the prominent British towns and cities or they are completely piratical or unpronounceable!  Great stuff!

This walk went deep into a rain forest area.  It was very steamy and very hot.  It was a lovely walk though.  Once again we followed the Lake side.  Along the way we passed a white faced heron.

Emerging at Black Jack Point and it was time for lunch and home for another siesta…….

We spent our last evening in Toronto (!?!) with Wendy and Sarah’s family, eating Thai food against the backdrop of lorikeets cheeping in the trees just beyond the balcony tables. The noise reached fever pitch around  9.00 pm and then the sound dropped and we were left to enjoy the scenery of the lake.  We drank champagne and excellent Thai food.  A great evening.

3 thoughts on “A second adventure in Australia”