We were all up early. The location was an hour and a half away. We left Peter’s armed with food enough for a ‘truck lunch’. All aboard we set off. The cool morning was being warmed through by the brilliant sunshine pouring down.

We reached the edge of the Gibraltar Range National Park and Raspberry Lookout. Here we could look over the surrounding tree covered hills and valley below us . Peter pointed out the different colour of the green in the gullies where the water was running down the hillside. Our only company was a chap with a motorbike and trailer arrangement with a box for his dog on the back. His dog was noisy but friendly and having sniffed at us all, he wandered around the area, tail wagging and full of beans! 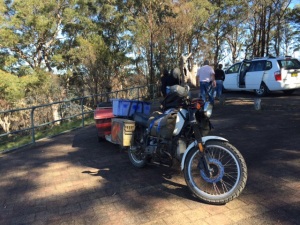 Having completed our overview of the valley, we headed off to the Mulligan picnic area in the National Park. There were world heritage rain forests in the park and a World Heritage Scenic Walk and we did part of this under the supervision of Peter who is a retired **Ranger and therefore full of knowledge about everything to do with nature it would seem. Before we set off we had some of his wonderful heavily whisky soaked fruit cake. It was scrummy and, as it turned out, a fortuitous in take of energy!

We passed Mr Mulligan’s hut – built very much after the style of the early settlers huts that I have just read about in the book ‘The Secret River’  which is all about the life of the early prisoners transported to Sydney. Mr Mulligan – much more recently – was there measuring the depth of the water levels in the stream running through the area that he was trying to harness to make hydro power. He never achieved his ambition…… Leaving the hut behind and having fully utilised the earth loos that were 500% better than any experienced in China – we set off. 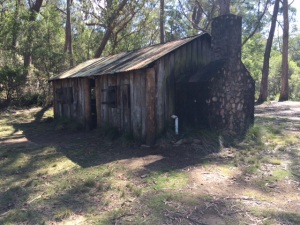 We headed first to The Needles, a promontory overlooking but further down in the valley we had seen from Rasberry Point. All along the way Peter talked to us and pointed out the benefits and otherwise of bush fires (there had been one the previous year) and many of the trees were fire charred. There were frequent pauses for bird watching. We saw honey eaters, a pied currawong, tree creepers and a kookaburra laughed maniacally as we passed. We saw all sorts of plant life. Amongst them was a different variety of bottle brush, grass trees of differing black trunk lengths (some of them circa 200 years old), orchids and stag ferns growing high up in the trees. We crossed bridges and saw beautiful rock filled streams, magnificent fungi used in the past by the aborigines as fire carriers, the ‘running postman’- a beautiful red flower with droopy bits was stunning. When we eventually reached the Needles we could see where we had first driven to overlook the valley above us and an amazing vista of a cleared valley nestling in the distant tree covered hills. At every turn we were reminded of the energy and commitment of the past settlers in making the ground usable for farmland by pure physical hard work and I guess desperation. Without land to farm you starved. 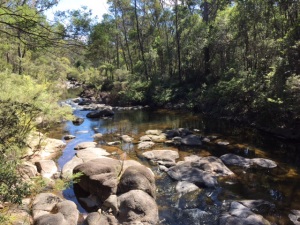 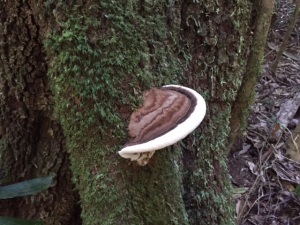 Turning away from the Needles we retraced our steps back along the path where we saw birds nests suspended from the trees. Every now and then we came across an area of rock – the formations looked man made. They were spectacular! We spent some time watching two Glossy Black Cockatoos. While we watched they fluttered from branch to branch exposing bright orange plumage beneath their wings. Eventually they settled on a branch together. They looked like an old married couple sitting on their branch together. 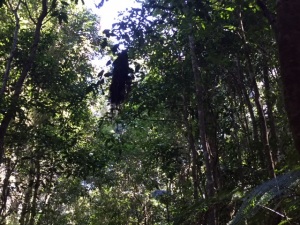 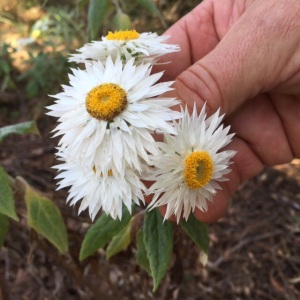 Passing further streams and Paper Daisy Flowers, we continued our way to the Fern Tree Forest where amazing fern shapes lined our route and made perfectly formed umbrellas over our heads. Next came swamp land. Golden grass covered areas quite waterlogged. Along the path beside the swamp we came across the Sun Dew insect eating plants, flat to the ground but lethal to the unsuspecting insects that passed by. Enormous ant hills came into view. Still we walked on. 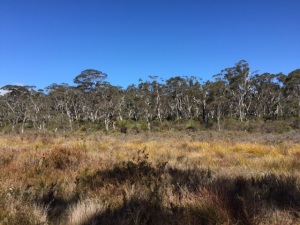 At 3.00 pm we arrived back at Mulligan’s camp. We had walked for 5 hours. What a lot we had learnt! We were starving!

As we sat eating our ‘truck lunch’ a pademelon -a small kangaroo type creature came and sat next to us. First he ate a crumb of cake. Next a piece of banana and finally a piece of apple! He was quite tame and totally cute.

Now is perhaps an appropriate time to talk of kangaroos. They are rather amazing creatures although I think they look as though they have been created by a committee! A female kangaroo can have three ages of baby on the go at any one time. It can have one in the womb which will not start to grow or be born until conditions are right for it to have a chance of survival ie if there is nothing to eat the baby will stay where it is until things are better. When it is born a kangaroo is about the same size as a jelly bean. It will emerge from the mothers vagina and the mother will lick its fur to provide a path for it to its pouch. The baby will then pull itself up by its front paws up to the pouch. A monumental feat for a jelly bean! Once ‘home’ it will latch on to a teat which will hold it safe as well as feed it until it is big enough not to fall out. There can be a second older baby at the same time fearding on another teat that will provide the right sort of milk for an older baby. Babies big enough are aloud out to allow Mum to clean the pouch and will then hop in again. When mum is travelling, a band of muscle will tighten to keep baby in. This relaxes when they are stationary to allow baby to peep out. Tell me kangaroos are not amazing! Just one more thing – kangaroo droppings are square just to differentiate them from other species! All you need to know about kangaroos!  Sadly we have seen many dead on the road.

Apple finished, we packed the remnants of our lunch away and made our way home. Tired, but almost overwhelmed with the walk and all that we had learnt and seen.  I felt that some time in the recovery position was required to digest it all.  A very special day with a very special man.

We reached home late afternoon. Keith set out to to cook the venison that Peter had retrieved from his freezer. It was deer that he had shot and butchered from his land. We made roasted vegetables and sat down to eat at about 8.00. We did not get off to bed until 10.00. A late night for us!

**please note this change.   Peter has pointed out the he was not a Bush Ranger as originally stated – this was the name given to Australian Outlaws…….. I can only claim the ignorance of the English!  Peter has graciously accepted my apology and has had a good laugh at my expense!! Good on him!