it was another gloomy day, not brightened by us finding that there was no breakfast  supplied with our room  –  we wished we had drunk more of the port……  In the event we decided not to wash up the port glasses as a small protest as they had advertised themselves as providing bed and breakfast and wifi and we had experienced neither!

We drove out of Port Fairy (it used to be called Belfast), a town that had been established as a whaling port and had in a past life a thriving  export industry of wool, gold and wheat.  These glories are now behind them and the community relies on tourism and crayfish now for its living.  A very early surprise in the day was a cheese outlet   Not what I expected by the side of the road – but there it was and big business too.  The site housed a cheese museum and before 10 in the morning we were sampling cheese!  Not being able to pass this by, our purchases in hand off we went and on to the Great Ocean Road proper ……

It was still not the brightest of days with intermittent showers, but the first stop we made was at the sign that said ‘London Bridge’  it had to be done! There we found ourselves peaking over the crashing waves surrounding a huge part of the coastline that had broken away and formed a sizeable arch – London Bridge!  Despite the glares of a Japanese chap photographing his wife very seriously avec tripod and a very large lensed camera, we took our snaps and withdrew with the distinct feeling we had ruined their photo shoot and that those tripod legs would be snapping shut in irritation behind us! 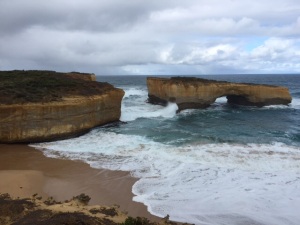 Next stop was Loch Ard Gorge –  a truly incredible inlet that had borne witness to many a shipwreck. By now we were finding people – though in fairness it was only one or two – at the sights we stopped at.  To date we had had the place to ourselves!

The next stop was for the big one -the Twelve Apostles (to be frank  I could only count 9 ….) –  a really impressive sight – but shared by loads more people!  Where had the come from?  We had seen no one on the road  – and then we realised they were coming the other way!  Apparently – at a push – you can do Melbourne to the Apostles in a day!!  Mystery solved. Regrettably the weather was not great at this point, but the rain held off for us to get a good view of them, but  we did not walk down to the beach but decided to have lunch in the car instead.  To date we have been quite thorough but 86 steps down to a wet beach in the rain did not seem attractive ……. 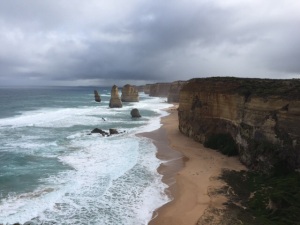 mystreiously we then left the coast and had a very meandering drive in land.  Thank goodness for an automatic car as we twisted and turned around hillsides.  I thought it reminiscent of the Dordogne  lush green vegetation and winding roads   And then at Apollo Bay we came out onto the coast again.. The sun came out and it was glorious.   We drove along the road next to the sea as the waves crashed onto the shore  the terrain was still very much up and down and twisting and turning but now we had the sea at our shoulder all the time  – the true Ocean Road.

We passed through Lorne, Anglesea and Torquay – all quite large townships on the road and then we left the sea again and the Great Ocean Road with its shipwrecks and history was behind us and signs to Melbourne became more prominent.

We had decided to stay at Queencliff, a truly Victorian town across the bay from the Mornington Peninsula in readiness to take the ferry on Saturday morning en route  to Melbourne.  We checked in to the truly Victorian hotel who said we could have a room and shared bathroom (one bathroom between three rooms….) or we could have the small apartment across the road. We opted for the apartment.

However we did enjoy a very good meal at the hotel in front of a roaring fire!